Trust in influencers has plummeted to an all-time low according to the 2018 Edelman Trust Barometer released today.

Recent received wisdom states that, as consumers, we’ve grown savvy - immune to the advertisers’ guile. We are skeptical of much that is ‘official’ be it politics, big business or traditional masthead media. We’d rather trust the opinion of someone just like us, someone who’s really used the product, to tell us whether the product works or not. Whether it’s worth the purchase price.

Beyond ‘people like us’ we’ve turned, by extension, to social media influencers.They are people like us - but at scale. We find them more relatable; more engaging than traditionally authoritative voices. A less polished, more authentic, intimate voice which moves us to change our behaviours or opinions.

Well, not any longer. The credibility of ‘a person like yourself’ has declined substantially. Peers are no longer the most-believed source of information according to the 2018 Edelman Trust Barometer.

The survey results show the first signs of regret about over-dependence on peers. The credibility of ‘a person like yourself’ — often a source of news and information on social media — dipped to an all-time low in the study’s history.

The report suggests that authority rather than popularity is a key to cutting through the fog of fake news. “In a world where facts are under siege, credentialed sources are proving more important than ever,” said Stephen Kehoe, Global chair, Reputation.

How did influencer power lose its way?

How did influencer power lose its way? In short it hasn’t. But there are too many people jumping on the influencer bandwagon willing to monetise their social media following without possessing real influence over their following. And too few brands who are equipped to set effective objectives and measure against those objectives in their influencer campaigns.

Too many stories of influencers who offer to provide positive product reviews in return for cash or free stuff. Last week’s case of Elle Darby asking the owner of a Dublin hotel for free accommodation in return for Instagram Stories and YouTube content is the latest example which has caused a backlash against influencers both in new and traditional media.

There are too many influencers shilling products, providing influencer advertising. Producing ill-thought out sponsored content for brands with which they have no value affinity. No kindred spirit in tone of voice. And no connection with their audience tastes.

But these examples are not representative of real influencers. Calling yourself an influencer is like buying yourself a T-Shirt with the words: ‘World’s greatest lover’ printed on the front. The power to self-appropriate such claims is not within our gift. These descriptors can only be bestowed upon us by others.

It is other people who decide who influencers are; not us. Influencers are called influencers through third-party endorsement because they … er … influence. They are change agents. They form or change opinions. They alter behaviours. I’ve written before about why calling yourself an influencer is just plain wrong.

Ways for influencers to ensure trust

Make way for the experts

Who is making up the shortfall in trust? It’s the experts: The technicians, the financial analysts, the successful entrepreneurs, the journalists and CEOs. 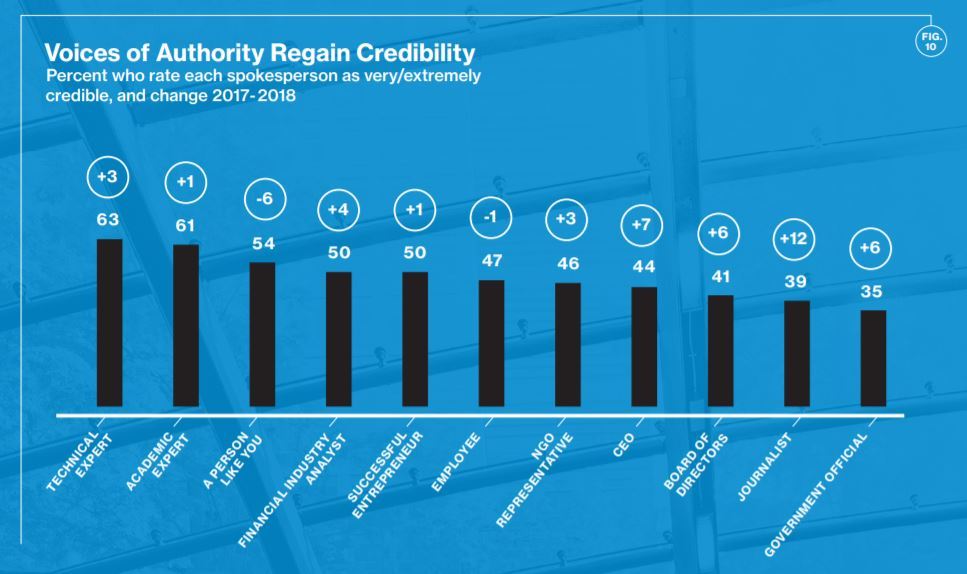 This year saw a revival of faith in experts and decline in peers. Technical (63%) and academic (61%) experts distanced themselves as the most credible spokesperson from ‘a person like yourself,’ which dropped six points to an all-time low of 54%.

Whilst trust in journalism jumped five points in 2018 the report showed confusion about what ‘the media’ means today.

A closer look at media also reveals that people’s definition of media is broad and wide. People agree that platforms—including social media and search engines—are part of “the media,” alongside journalism, or publishers and news organisations.

I have written before about why it’s time to reclassify social media platforms as publishers and for Tech giants with great power should come responsibility in content.

Trust in journalism jumped five points in 2018 Edelman Trust Barometer (to 59%), whereas trust in platforms dipped two points (to 51%)—amounting to a seven-point spread today between the two.

Journalists hold politicians accountable. They compete with each other to ask questions and raced to report on facts to us their readership. At the bedrock of true journalism lie facts and the truth about the facts.

Journalism is a discipline of verification. It relies upon core concepts – transparency, humility, and originality.

But effective and thorough journalism costs money. And we don’t like paying for our news. Reuters Institute for the study of journalism Digital news report 2017 figures show: “just 3% in the UK paid for an ongoing news subscription in the last year.”