Was the Elle Darby / Dublin hotel incident an influencer stunt or another growing pain for the influencer marketing discipline?

Story first published 20 January 12:00 UK time -  The Elle Darby 'I was exposed' video had generated 1.2m views. This is against her average of circa 25k views per video.

Last updated 23 January 2018 20:30 - The 'I was exposed' video now stands at over 2m views.  Views to her YouTube channel now are now 2.8m for last 30 days. Figures in the article below have been updated accordingly.

For those of you who haven't been following the story of UK-based vlogger, Elle Darby, and her request to stay at the Charleville Lodge Hotel in Dublin free of charge in return for exposure on her Instagram feed and YouTube channel here’s the synopsis:

A publicity stunt by Elle Darby?

But, was this a publicity stunt by Elle Darby? She’s not new to vlogging. Her YouTube channel was set up four years ago (26 February 2014). Since then Darby has uploaded nearly 300 videos (296 as of 20 January 2018) to the video-sharing platform.

We can assume Darby understands the rules of engagement by now for connecting with potential clients. After all, her pitch email to the Charleville Lodge Hotel references past influencer work she says she undertook in the US. “Last year I worked with Universal Orlando in Florida and it’s been amazing for them!”

Over the past year Darby's videos have averaged 25k-35k YouTube views per video. This incident has propelled her into a higher league. To date she’s earned over 2m views from her video ‘I was exposed so (SO embarrassing)’ posted on 16 January 2018.

The channel has earned 2.8m views over the last 30 days according to Socialblade the statistics website. Around x6 the usual number.

The graph above shows flat growth in the number of daily video views for the Elle Darby YouTube channel two-and-a-half years. The graph below shows flat growth after a step change in October 2016. Both graphs show a spike in the number of views following two successful videos in October 2017. One a product haul video, the other, a tour of her new flat.

Subscriber signups have been flat throughout the last year with the exception of a spike at the end of October following a product haul video.

Socialblade shows Darby adds around 300 new subscribers a day. The Dublin hotel incident has generated a spike in new signups. 14k new subscribers in the last 30 days. Versus around 9,000 she would usually expect to receive.

The Charleville Lodge Hotel is a curious target for the YouTuber to want to spend a pre-Valentine’s romantic break. Why did Darby not approach more obvious hotels in the Irish city? Hotels like the Merrion Hotel, Ariel House, Number 31, InterContinental Dublin, The Marker Hotel Dublin or O'Callaghan Stephen's Green Hotel?

In 2015 he hit headlines with his ‘war on vegans’ . Later that year Stenson caused more controversy by doubling the room-rates around the time of a sell-out Ed Sheeran concert in the city. Then going on to suggest Sheeran fans sleep in homeless shelters or dog kennels if they are unwilling to stump up the cash for a room.

Was it a stunt?

I don't think so. I think these are yet more growing pains from the fast-maturing discipline of influencer marketing.  An example of a self-styled influencer believing that audience reach is the same as changing behaviours or opinions. A case of a young vlogger sending an ill-thought-out pitch without including suggested collateral detail, quantifiable success stories from past endeavours or joined-up targeting of potential client collaboration.

Neither vlogger nor hotel owner has covered themselves in glory. Though Stenson obviously believes in the age-old adage that 'all publicity is good publicity' regardless of sentiment.

Influencer marketers are always told about best practice for selecting their influencers (my 4S Filter is a good place to start). Influencers need to undertake the same due diligence with the brands they’d like to work with

Equally Paul Stenson doesn’t need to make her inept email public. Better, instead, just to ignore her request of say: 'thanks but no thanks and move on.'

Stenson’s line: ‘who’s going to pay the staff who look after you? … Who’s going to pay for the light and heat’ are largely red herrings. Hotels run on high fixed costs versus lower variable cost ratios. The bedrooms are always going to be there irrespective of whether they’re slept in or not. Waiting staff need to attend to other guests who also will require heat etc.

Influencer marketing does need to mature. For sure. As it does so influencers (like Darby) who don’t seek to form long-term relationships with brands will need to find other forms of employment. The industry will move (is moving away) from influencer advertising towards more meaningful long-term collaborations.

Incidents like these highlight the zeitgeist of influencer marketing.  Last year more people Googled the term 'influencer marketing' than they did 'social media.' These incidents will help the discipline improve. But they do not represent the industry as a whole.

Meanwhile, taken from the media page of the White Moose Cafe website (20 January 2018) runs the Call to Action:

“Paul & Jason have approximately 200k followers across their social media platforms. If you would like to get more eyes on your business, the White Moose Snapchat might be the place for you. Unlike other ‘influencers’, we won’t feature your brand in a contrived or staged way. We will highlight your product/service using a natural and comedic approach, and we will always be honest about what we think.” 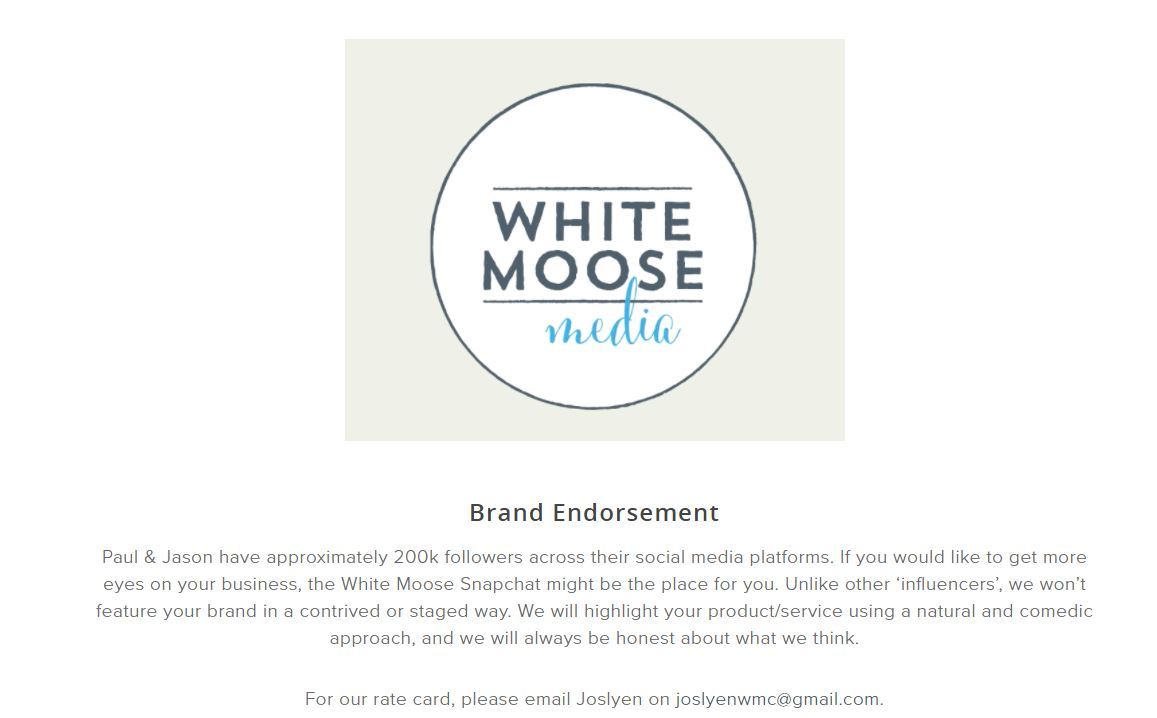