Why calling yourself an influencer is just plain wrong

Calling yourself an influencer is like buying yourself a T-Shirt with the words: ‘World’s greatest lover’ printed on the front. The power to self-appropriate such claims is not within our gift. These descriptors can only be bestowed upon us by others.

It is other people who decide who influencers are; not us. Influencers are called influencers through third-party endorsement because they … er … influence. They are change agents. They form or change opinions. They alter behaviours.

Influencers are not defined by size of reach alone. They aren’t influencers just because they have access to a large following on Instagram. Rather, influencers are influencers because of the impact they have on others. More than being a subject-matter expert, fundamentally it’s about connecting and talking directly with an audience.

The same is true of the moniker: thought leader. For the love of all things sacred, don’t pepper your social media profiles and bios proclaiming you are one.

And, like Narcissus falling in love at the sight of his own reflection, don’t be tempted to post ‘profound’ quotes you’ve thunk up and displayed against a backdrop of waterfalls, or sunsets or forests, or beaches (see below) on Instagram, Facebook or Twitter. Don’t force it. Let it evolve.

Jay Baer, the digital marketer and author, puts it well: “Trying to ignite a fire around your own work doesn’t make you a thought leader. It makes you an arsonist”.

Instead, focus on consistently creating compelling content that is both relevant and which resonates with your core audience.

Keep listening to and responding to your audience’s needs. Nurture your following by engaging with them; by answering their questions. Solve their problems. Help them realise their aims.

Show them, don’t just tell them. For, to use a phrase coined by C.G. Jung, the Swiss psychiatrist, “you are what you do. Not what you say you’ll do.” 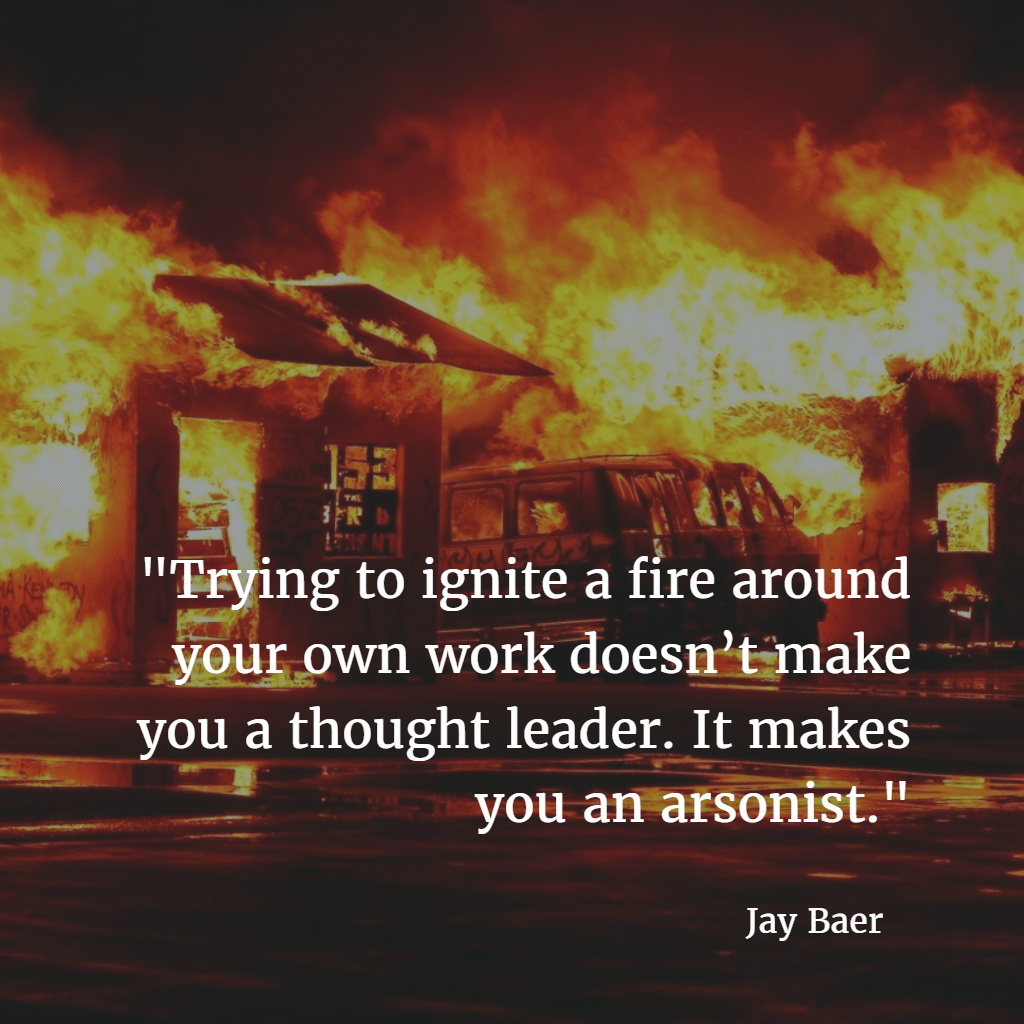 Influence is accretive. It evolves. It strengthens over time. Influence can’t be built on one-time visitors, but over time visitors become ever-more engaged with the content. More invested in the thoughtful points of view.

NOW READ: Why celebrity endorsement is not influencer marketing

Influence, thought leadership and being the world’s greatest lover are all founded on credibility which stems from authority.

We have to earn this trust, credibility, and authority we can’t own it by declaring that we possess it. Like reputation, these attributes are the result of what you do, what you say and what others say about you – to re-use part of the Chartered Institute of Public Relations definition of PR.