Exploring Public Relations: book at once both theoretical and practical; esoteric and accessible.  A benchmark text.

Disclosure: - I was gifted a review copy of Exploring Public Relations and Management Communication. Additionally, Paul Willis, interviewed me for his chapter 'Public relations and the consumer'. I liaised with Ogilvy and the Body Shop to enable two case studies to be included in this edition of the book.

Writing the foreword to Exploring Public Relations and Management Communication (fifth edition) the Professor Emerita Corporate Communication and Communication Management Department of Communication Science, University of Amsterdam notes that this new edition “raises unsettled questions about the definition, the tasks of the professional, the debate about professional ethics, and the issue of its impact.”

As influencer marketing attempts to professionalise we can learn from public relations’ lineage as a discipline traced back to Ivy Lee in 1906. Public relations is an industry that aspires to become a profession but often fails to adopt the necessary discipline and rigour.

Practitioners frequently fail to meet one or more of the criteria for a profession: qualifications; continuous professional development; a strong community of theory and practice; and an enforceable ethical framework. In this regard practitioners might have more in common with baristas than barristers - a slightly fatuous comparison I made back in 2015.

As with influencer marketing public relations’ biggest barriers to progress are often characterised by a lack of education, learning, and professional development.

One thread that weaves through the near-650 page book is the interdisciplinary connections between public relations, marketing and advertising.

Karen Freberg in her chapter ‘social media for public relations’ makes the point that social media is not owned by any one creative discipline. Rather, “Instead of dividing disciplines based on ownership barriers may need to be taken down and responsibilities should be shared. This is how collaborations are formed which is what we are currently seeing in the industry. Public relations is a natural bridge to connect all these associated disciplines together based on the emphasis they place on relationship management and community building".

Likewise Paul Willis in his chapter: ‘Public relations and the consumer’ notes the blurring of creative disciplines asserting that “this climate of flux also requires PR practitioners to become integrated communicators who are comfortable co-ordinating and using different types of communication from across the marketing mix”. Willis contends that better collaboration affords efficiency and effectiveness benefits. Additionally, a PR perspective can more generally enhance consumer engagement.

Willis cites peer Jim Macnamara (2015) who warned some six years ago of “the colonization of social media by marketing departments and the resulting focus on one-way transmission of promotional messages designed to sell products and services”. Mcnamara goes on to note that “most other marketing communication remains one-way, and true engagement with customers or other stakeholders is minimal despite widespread claims of customer engagement. PR’s foundational interest in encouraging dialogue between an organisation and its stakeholders has the potential to be an antidote to these tendencies”.

This brings us to another discipline mentioned in the book: influencer marketing.

Freberg provides a neat definition of influencer marketing. It is one which does not limit itself to selling product. “influencer marketing” writes Freberg “is the specialisation that is involved in researching listening and gauging and working with individuals who have an established presence and voice on either platform or multiple platforms and can persuade and motivate audiences to take action based on what they share on social media.”

In the chapter devoted to media relations Ramona Slusarczyk and Jonathan Ward note that the “emergence of a fragmented digital media landscape has somewhat diminished journalists’ and editors’ role as gatekeepers. Mainstream news channels may remain more trusted but influencer relations are now on a par with traditional media as a key to reputation management” the authors contend.

2020 research by influencer marketing agency, Takumi, backs this assertion. One-in-four consumers are more likely to source news updates and opinions from influencers than from journalists and established news outlets according to their data. The ratio for younger consumers is even smaller. One-in-three people aged 45 or younger now turn to influencers ahead of journalists for news and opinion.

NOW READ: 1-in-4 consumers turn to influencers for news before journalists

This raises a key issue within influencer marketing: its loose terminology; in this instance the conflation of the terms advocate and influencer. It is possible that a person with a high degree of influence may produce content which is negative in sentiment (i.e. lower right quartile of figure). Not all creators enjoying high levels of influence produce and publish content which is of positive sentiment. 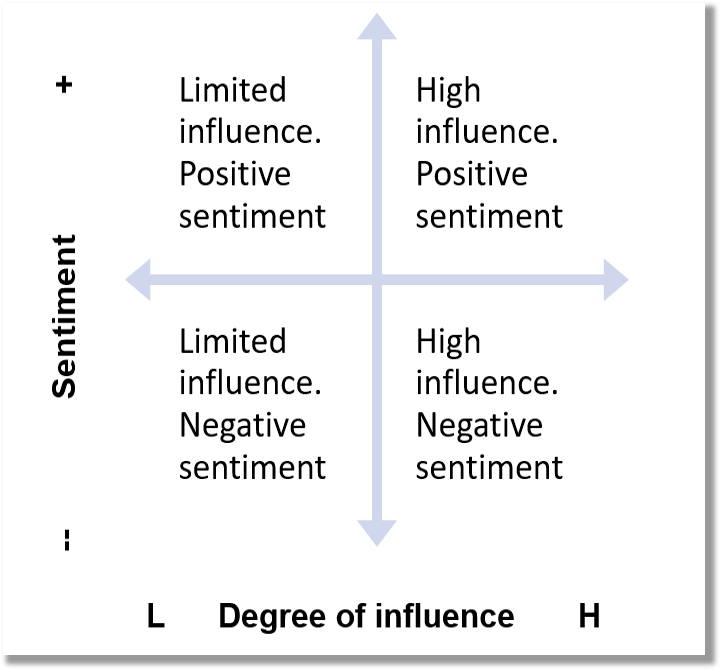 Concluding their chapter on media relations Slusarczyk and Ward note that there’s “an opportunity for PR to practice symmetrical relationships, maintained in real time with more efficiency and connectivity. All relations, whether with traditional journalists or online influencers, should be maintained as opportunities to nurture and learn from.” They maintain that in “the era of fake news, the desire for credible information has never been more important.”

This belief that all relations should be maintained, nurtured and learned from separates PR practitioners from marketers and advertisers who will seek collaboration with influencers in order to harness positive sentiment in distributed content with the aim of selling product to customers.

PR sits at the nexus of conversations between an organisation and its stakeholders aka publics aka important people. By ‘scanning the environment’ and listening to conversations about the organisation and its competitors, locating where these conversations are being played out and by whom public relations practitioners are well placed to help organisations identify opportunities and risks: to identify who is influencing the opinion forming and then to aim to neutralise impact from dissenters and to amplify the impact of advocates.

The transition of media relations into influencer relations is picked up by Paul Willis in his  chapter: ‘Public relations and the consumer’ Willis makes the point that “journalists have now been joined by bloggers as people whose endorsement is prized and sought by brands.” This makes sense when noting that the number of overall independent news outlets has declined by 59.4% since 2015.

Differences between celebrity and influence

Lastly Kate Fitch observes the fascinating distinction made in China between internet celebrity and key opinion leaders in her chapter: ‘Celebrities and influencers’.

‘Wanghong’ we learn from Fitch’s chapter is Mandarin for internet celebrity. “Wanghong differs from Anglocentric understanding of influencers, in that their focus is monetising audiences via retail activity and product lines rather than sponsored posts. Key Opinion Leaders (KOLs), on the other hand, tend to be popular because of achievements in other fields - i.e. acting or sport.

This is an obversastion which can be extrapolated to encompass the study of influencer marketing as a whole -- largely northern hemispheric; largely North American or European centric. 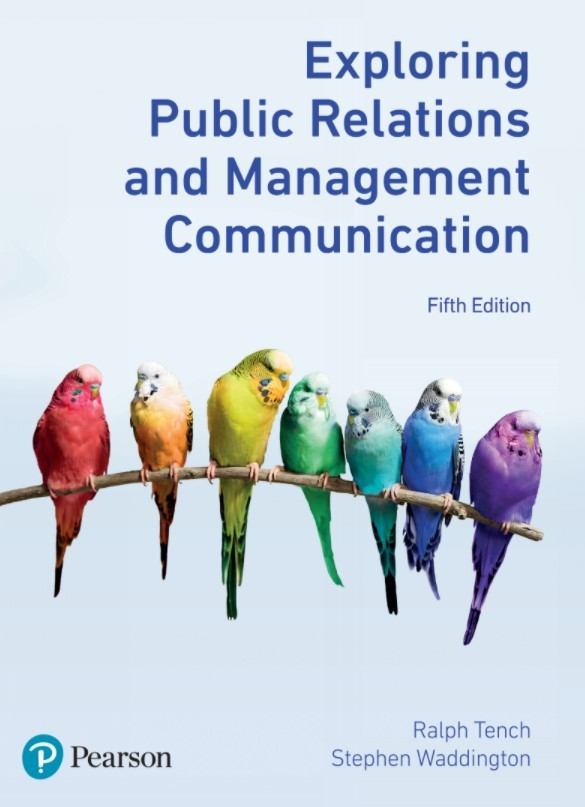 Exploring Public Relations and Management Communication is a definitive guide to public relations theory and practice. It has been written by a community of 35 international expert contributors. It has a robust approach to learning design combining theory and practice, case studies, and practitioner diaries.

Exploring Public Relations and Managment Communication is the preferred textbook for universities around the world as well as for professional bodies and professional courses which adopt it as their core text.

Returning to the book’s foreword Betteke van Rule notes that the book’s themes are “what public relations is and could be, how to mange it for an organisation, what it does in and for society.” The book is at once both theoretical and practical; esoteric and accessible. My hope is that one day influencer marketing will boast a text as rounded and as useful as Exploring Public Relations and Management Communication.

Exploring Public Relations and Management Communication is published this month by Pearson priced at £45. For further information about the book please see exploringpr.com.

Very special thanks go to: