Unilever wants to clean up influencer marketing by making three commitments to remove bad practice from the discipline. Though laudable what do these commitments really mean?

Unilever believes influencer marketing has a bright future. But only if fake followers and fraudulent practices can be cut from the discipline.

Speaking on the first day of Cannes Lions Keith Weed, CMO of the FMCG giant says:

“At Unilever, we believe influencers are an important way to reach consumers and grow our brands. Their power comes from a deep, authentic and direct connection with people, but certain practices like buying followers can easily undermine these relationships.”

Weed laid out three commitments Unilever has made relating to influencer marketing at the International festival of creativity held today in the French Riviera:

Each point is laudable, but let’s take a moment to unpick the detail. 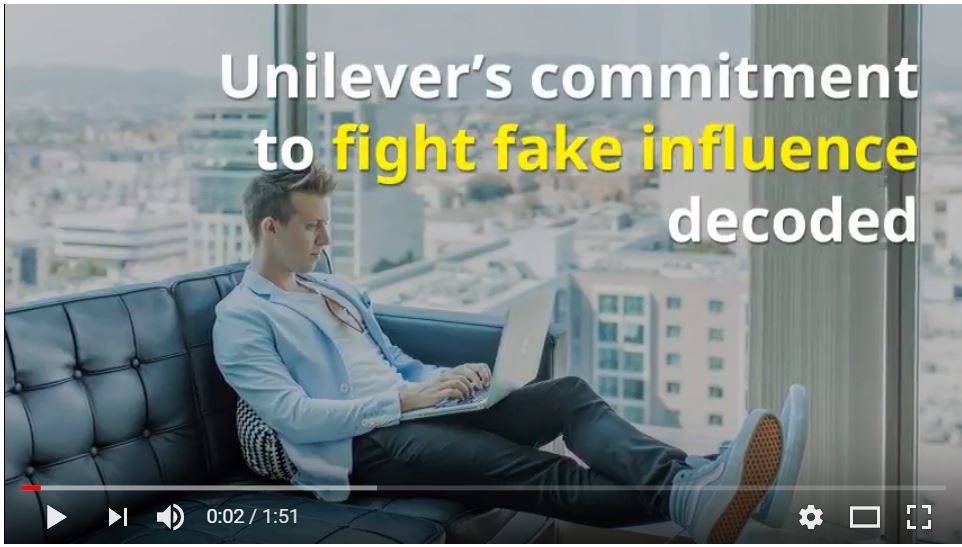 #1 What the pledge says: Unilever won’t work with influencers who buy followers

Why the pledge should be irrelevant: Influence is the ability to alter behaviour or change opinion. Bought followers are either bots or, if human, come from follower farms where the follower has neither an audience in their own right nor an affinity with your brand.

Pledging not to work with influencers who buy followers is like Vin Diesel announcing that he won’t be buying any more combs from now on.

#2 What the pledge says: Unilever has promised its own brands will never buy followers

Why the pledge should be irrelevant: It’s the same argument as the first pledge. Additionally, buying followers is cheating your audience. It’s treating them with contempt. It also raises the finger of suspicion: If you cheat with your follower figures what else are you cheating us on?

Ethics aside, who wants to be caught up in the next mainstream media expose of fake followers? See below for the point about consumers now being 'in the know'.

SEE ALSO: How to spot fake followers on social media

#3 What the pledge says: The business will prioritise partners who increase their transparency and work to eradicate nefarious practices throughout the digital ecosystem

What the pledge means: In reality Unilever will prioritise where their audience hangs out online; currently that's Instagram - the influencer marketing platform juggernaut. In June 2017 the photo and video-sharing social platform started to roll-out its paid partnership tag. At first sight this seems as though it’s putting its community first.

The flipside might well be that this is the first step in the platform’s long-term aim to kill off organic reach. Just as Instagram's parent, Facebook, has done its brand pages.

How did we get here?

If the essence of influencer marketing is authenticity; listening to ‘people like us’ share their opinions online, how did we get into this unholy, inauthentic pickle?

Fake followers arrived because marketers prized reach over influence. Marketers treated influencer marketing as a media buy. They reported success via CPMs  - the cost an advertiser pays for one thousand views or clicks of an advertisement. But big audiences don’t necessarily mean big influence.

Internally marketers were measured in their quarterly and annual work appraisals on key performance indicators which included their creative works CPM & theoretical reach. Call it moral hazard or self preservation, but if your annual bonus is dependent on gaining high CPM from your influencers - that's the metric you're going to be chasing.

Reach as a primary influencer marketing measure is a bullshit metric. Everyone in the industry has known this for years. But once consumers knew this ‘inconvenient truth’ it was time for marketers to cry foul and demand the industry cleaned up its act.

Consumers became aware of the extent of fake influencers and fraudulent influencer practice thanks to mainstream media exposes. The New York Times ran an exhaustively-researched report in January exposing Devumi, a US company which has in the past sold followers to personalities such as British Bake Off baker Paul Hollywood; Olympic rower, James Cracknell and Twitter board member Martha Lane Fox.

The NYT feature story was just a part of an increasingly vocal media who are calling out people who want to appear more popular or exert influence online by cheating the system. Digiday wrote about the issue in August 2017 and again in November. The Drum has covered how cosmetic brand, Sephora, handles fake influencers in December 2017.

Now under scrutiny marketers want to be associated with the solution, not the problem.

Reach has now given way to engagement as the primary influencer marketing measure. This has meant fraudulent or colluded engagement replacing fake followers as new scourge.

I've written elsewhere about why not all influencer engagement is created equal.

Brands benefit from influencer marketing through taking a system-based approach and using a specific methodology to the discipline. The process starts with planning your objectives, aligning those communications objectives to your business goals.

The process continues to include careful selection & effective vetting of would-be influencers to ensure they’re the right fit for your brand.

The structured approach leads to building a mutually-beneficial business growth partnership between brand and influencer over the long run rather than tentpole influencer advertising.

SEE ALSO: Influencer marketing is gaming itself to death. Here’s how to stop it

Fail to deliver either and the business model collapses for both brand and influencer.

Commercial imperative as much as moral indignation will force a maturation of the influencer marketing industry.