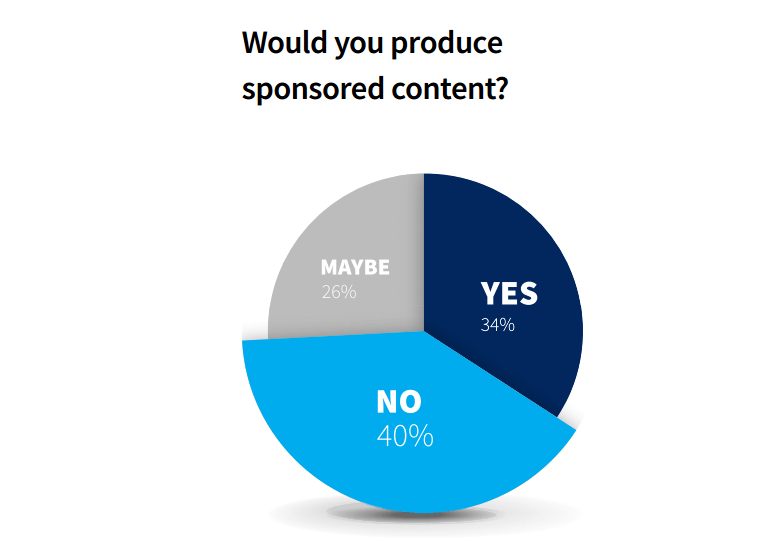 Today we search, surface and create news content in a myriad of ways but journalists remain crucial influencers for reporting and interpreting news.

All-in-one brand newsroom and multimedia PR platform company Mynewsdesk surveyed 2,000 journalists around the world to get their views on the current state of journalism.

The result: a snapshot of an industry publishing on an average of three platforms. Still using press releases. skeptical about the place of sponsored content and native advertising as a revenue opportunity.  And snobbish towards bloggers.

The media world has changed. It’s fragmented. Rob Brown makes the point well in Share This Too asking: Is the Huffington Post a newspaper? And reasoning that it sounds like a newspaper. But it isn’t printed. It contains articles like a newspaper. But largely these aren’t written by journalists. It houses video. So, does that make it a broadcaster?

In fact Huffpo has more in common with a blog than with a newspaper.

Journalism is platform agnostic. Today journalists publish on three different platforms on average, something that was unheard of a few years ago.

Objectivity is a key belief for journalists according to the Mynewsdesk survey. 63% answering that it was definitely true that a journalist should always aim to be objective.

I believe for most mastheads the notion of objectivity is subjective. Journalism is as objective as is allowable without offending the readers and alienating the advertisers. It is a commercial reality. Unless, like in some Nordic countries, your masthead has shared government ownership in which case objectivity may come with a political leaning.

Transparency over objectivity & the commercial reality of native advertising

Objectivity should give way to transparency. The commercial realities of journalism today mean that mastheads must rely on more than display advertising and the publication’s cover price to keep them in business.

Reuters Institute for the study of journalism believes “online advertising – banner advertising in particular – is going through something of an existential crisis.”

Sponsored content or native advertising is a potential source of income. However, most journalists and editors responding to the survey show great skepticism towards this mix of editorial content and advertising.

The Mynewsdesk survey shows journalists are divided over whether they should produce native content. Some 40% said ‘no’, 26% opted ‘maybe’ and 34% said ‘yes to this question.

It’s a regional issue, though. Journalists in the US and the UK were more accepting of native advertising. Here half of the journalists were prepared to create native content (49%).

Ask this question in Norway and the response rate plummets. Only 11% of Norwegian journalists were open to native content, in between were the German (35%), Swedish (44%) and Danish (46%) nay-sayers.

These figures reinforce findings from a survey last year conducted by Reuters Institute for the Study of Journalism.

Because media ownership in the UK and US is primarily private and independent of government support, journalists are more open to native content. The competition in the UK and US is also fiercer compared to Scandinavian countries which are characterized by a long tradition of media support and protection of journalism from business interests.

However, the surveyed journalists know which way the wind is blowing. 72% stated it was either definitely, or to a certain extent true that native advertising would be more widely accepted in five years time.

Consumers don’t have a problem with native advertising. Red Bull, the energy drink brand, is the world’s largest extreme-sports publisher. Consumers don’t give a hoot that this high-octane content comes from a brand.

In fact according to an IPG Media Lab survey, commissioned by Forbes Media, consumers don’t just like native advertising they show it helps them with their buying decisions.

There are, of course, caveats. Consumers don’t have a problem with native advertising on two conditions:

I’ve written before about how to master native advertising best practice.

The Mynewsdesk journalism trends 2016 report also devotes time to consider the public relations work flow. The PR platform company approached me as part of my day job leading influencer relations at Ketchum, London. Here’s what I had to say about the press release:

“The press release has been an integral part of the PR industry since inception. Ivy Lee penned the first one 110 years ago. It’s enshrined within PR’s workflow.

At its most basic level the press release is merely a bundle of information covering Kipling’s six honest service men – the what, why, when, where, how, and who. These are the fundamental building blocks upon which influencers – such as journalists – can create a story.

That’s what makes the press release so compelling. It’s the distribution of this information bundle which evolves, both in term of who it’s aimed at and how it gets there. And we can choose which elements to de-bundle. Which elements to include like visual content.

Journalists are integral but are only one grouping within today’s cadre of influencers. If the press release is a fundamental PR workflow tool, then relationship building is a bedrock skill – there’s a clue in our profession’s name after all.

PR professionals need to build relationships with influencers by developing mutually rewarding relationships. In the earned space that means being useful to them. Knowing what sort of content they produce. Knowing what they’ve written about recently and being able to help by giving them information which furthers that conversation.”