Why CGI influencers are the perfect fit for fashion industry

CGI influencers are the perfect mannequin. They can be placed within any context and dressed in any sponsoring-fashion house’s garment.

Influencer marketing effort is often front-loaded. It takes time - and therefore money - to identify the most appropriate influencer for your brand.

Enter the CGI influencer. With avatar influencers you don’t have to:

CGI influencers will always turn up on time for the creative shoot. They’ll always look Insta-immaculate, too.

I’m not the only one to see the growth potential. According to LA TechWatch Brud, the company behind  Lil Miquela has just raised $6M in funding from Sequoia Capital, Boxzgroup, SV Ange and other investors.*

Investors see the growth potential in these computer-generated creations becoming mainstream fashion influencers. Proof of concept has been made de-risking their investment. Lil Miquela, for instance, has worked with Prada on its Autumn Winter collection. She’s posed wearing Diesel and Moncler, too.

Go off!! #pradagifs are live in stories! Start posting and tag me

Lil Miquella may be the most famous she’s not the only Insta-creation working with fashion brands.

Shudu, is the CGI 'supermodel created by British photographer Cameron-James Wilson. Shudu was designed as an art piece celebration of beautiful dark-skinned women; a project to frame beauty.

I can't describe how grateful I am to @soulskybrand for sending me this beautiful t-shirt. I hope the picture does it justice

thanks also for the touching letter, which I hope you don't mind me posting!! . . #3dart

Since then, Wilson says, he’s received many brand offers in the fashion and tech worlds, all hoping to work with the CGI model.

The fashion vertical is, perhaps, the natural space to inhabit for these CGI influencers.

There is a long history within the fashion industry to touch up images so as to perfect them. From the antediluvian airbrush to 3-D graphics and Photoshop.

These avatar influencers become dolls or mannequins that can be placed within any context and dressed in any sponsoring-fashion house’s garment.

In the social age the professional and personal life blend into one. You can no longer fully separate the two.

And so, a significant contradiction of Lil Miquela ranking as one of the Insta-famous with her 1.1 million followers is her ‘human story’.

Online there’s a tendency to only show the positive, successful side of your life. Instagram is the platform of choice for this form of self promotion. All the images posted to the photo-sharing platform could carry the Berocca tagline: “You but on a really good day.”

Lil Miquela portrays a more rounded self in her Instagram feed. She shares stories of British school boys helping avert a suicide attempt. She writes letters to the US Congress in support of the transgender community and builds awareness within her following of the 1.4m transgender group living in her country. The URL in the bio on her Instagram feed links to black girls code - a charity aiming to increase the number of women of colour in the digital space.

Such elements are expertly curated to communicate the rounded self of what it means to be human. A set of values and ethics which overlay the commercial imperative of identifying brand sponsorship.

Given this context Lil Miquela becomes more real than some human Instagram influencers. 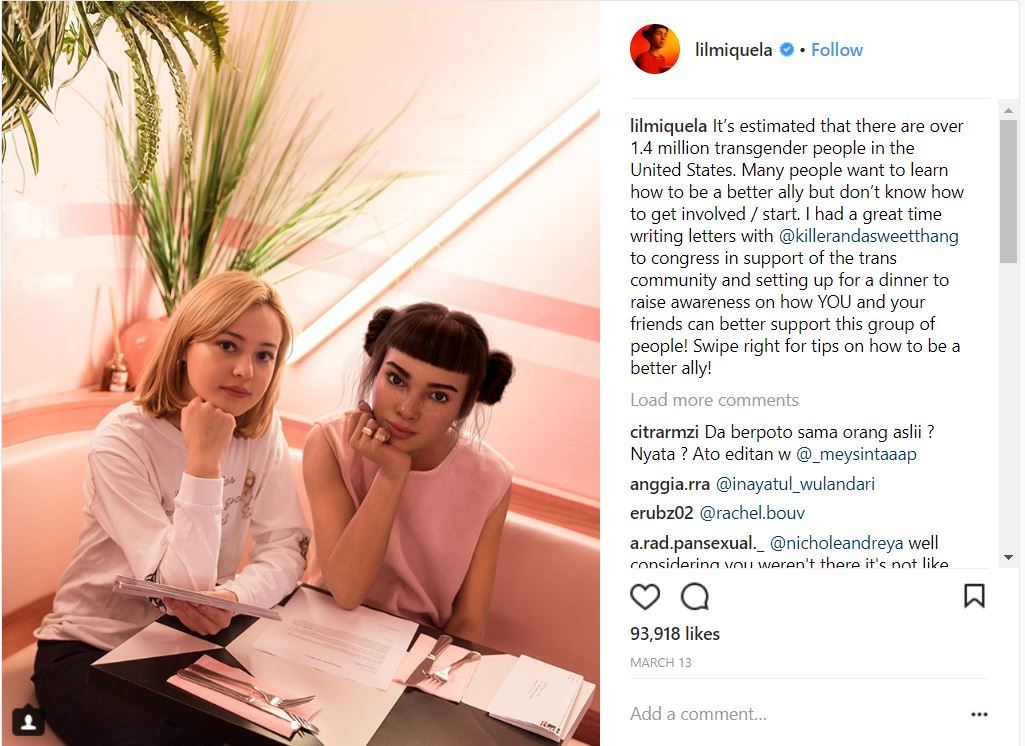 Final word: What does this mean for disclosure regulations?

The Financial Times newspaper ran an interview with Lil Miquela a few weeks ago. Of the dozen or so questions the only one which went unanswered was: 'Do you put up sponsored (paid-for) content on line?

The Federal Trade Commission is the independent agency of the US government tasked with promoting consumer protection and regulating influencer marketing.

Last year, it updated its endorsement guides to require influencers to disclose their marketing relationships and identify paid posts with a hashtag like #ad or #sponsored.

So far it's unclear how those rules would apply to CGI influencers who aren't human, and whose creators cloak themselves in secrecy. Presumably brands paying these avatar influencers would be the first to receive the FTC knock at their door.

So @lilmiquela was interviewed by @financialtimes a couple of days ago - via email (natch). Interesting read - if superficial. Anyhoo, the only question Miquela failed to respond to was whether or not 'she' put sponsored content online. #InfluencerMarketing pic.twitter.com/rVy8ABWZH7

Yesterday @lilmiquela posted to her #IG feed a link to https://t.co/bnDWZ4UXd3 who claim to be an LA-based technology startup specializing in #AI & robotics. They, in turn, claim to have liberated #Miquela from Cain Intelligence #InfluencerMarketing

This claim by brud answers 1 question but poses another. If true it officially answers the obvious - that #Miquela is #CGI (well derrr!) But who should the @FTC chase when @lilmiquela flouts #InfluencerMarketing disclosure regs?

* When the Lil Miquela Instagram account was ‘hacked’ last month by fellow CGI Insta-influencer Bermuda I tracked two of the people behind Brud: Sara Decou, chief of Stuff at Brud and Trevor McFedries. They appeared to be operating from a residential address one street away from the Los Angeles City College.