When influencers act like jerks: how brands can protect themselves

Logan Paul is the latest influencer to act like a jerk. He won't be the last. Here's how brands can limit their exposure to rogue influencers.

Last month Logan Paul was on a high. Forbes, the business news outlet, had just placed him as the fourth highest paid YouTuber in 2017 earning a reputed $11.5m.

Then, on New Year’s Eve Logan Paul uploaded a video showing a dead body in Japan’s Aokigahara forest - the most popular place to commit suicide after San Francisco’s Golden Gate bridge. Filming in the eerie forest Logan and his friends repeatedly zoom in on the deceased man before he appears to laugh nervously.

Last week YouTube finally dropped Logan Paul's channels with 16m subscribers from Google Preferred - a premium offering meant to ensure brands run their ads alongside quality content. But not until after the vlog had trended on the video-sharing platform. And big brands had unwittingly paid to advertise next to the video in which Logan Paul showed a lack of sensitivity to the body of a suicide victim.

So, what can brands do to limit - or even better,  remove - the risk of being linked to the next Logan Paul influencer fail?

The bad news: I don’t think you can ever completely remove the risk. Influencers are humans and we all have tendencies to act dum from time to time. Perhaps not Logan Paul dum but we’re all capable of making ill-judged decisions.

Around the same time last year PewDiePie went rogue. Both Google and Disney severed ties with the Swedish-born eGamer and video ranter as a result.

The decision followed upload of vlogs including one on January 11 2017 which featured two Indian men hired for $5 to hold a banner proclaiming: “Death to all Jews”. You can read more about the PewDiePie story in my blog from the time.

Poor decisions don’t end with Logan Paul or PieDiePie. I wrote a couple of years ago about Nike dropping boxer Manny Pacquiao for his remarks about same-sex couples, for instance.

I'm sorry for hurting people by comparing homosexuals to animals. Please forgive me for those I've hurt. God Bless! pic.twitter.com/bqjRcWqp8R

In 2005 H&M cancelled ads and Chanel and Burberry also severed their ties with model Moss after a London tabloid ran photos of her snorting cocaine.

Also in 2005 Insurance firm Churchill pulled its nodding bulldog TV ad featuring the voice of Vic Reeves, after he was charged with drink driving.

Fault does not always lie at the door of the celebrity or influencer. Within six months of Magic Johnson's November 1991 announcement that he had contracted HIV, his endorsement deals, worth nearly $12 million had disappeared. Companies such as Pepsi and Converse wanted nothing to do with him.

Brands can not immunise themselves from the chances of influencers making poor decisions. Brands can, however, greatly reduce the risk of such fracas fomenting.

From a marketing communications point-of-view, the Logan Paul incident demonstrates that working with influencers is a dynamic process. The relationship doesn’t begin and end with using algorithms to identify online creators based on reach, relevance and resonance alone.

Instead, brands need to continually validate and measure influencers’ fit against the company’s values, both at brand and corporate levels. Companies also need to check regularly that the influencer is helping achieve business objectives. 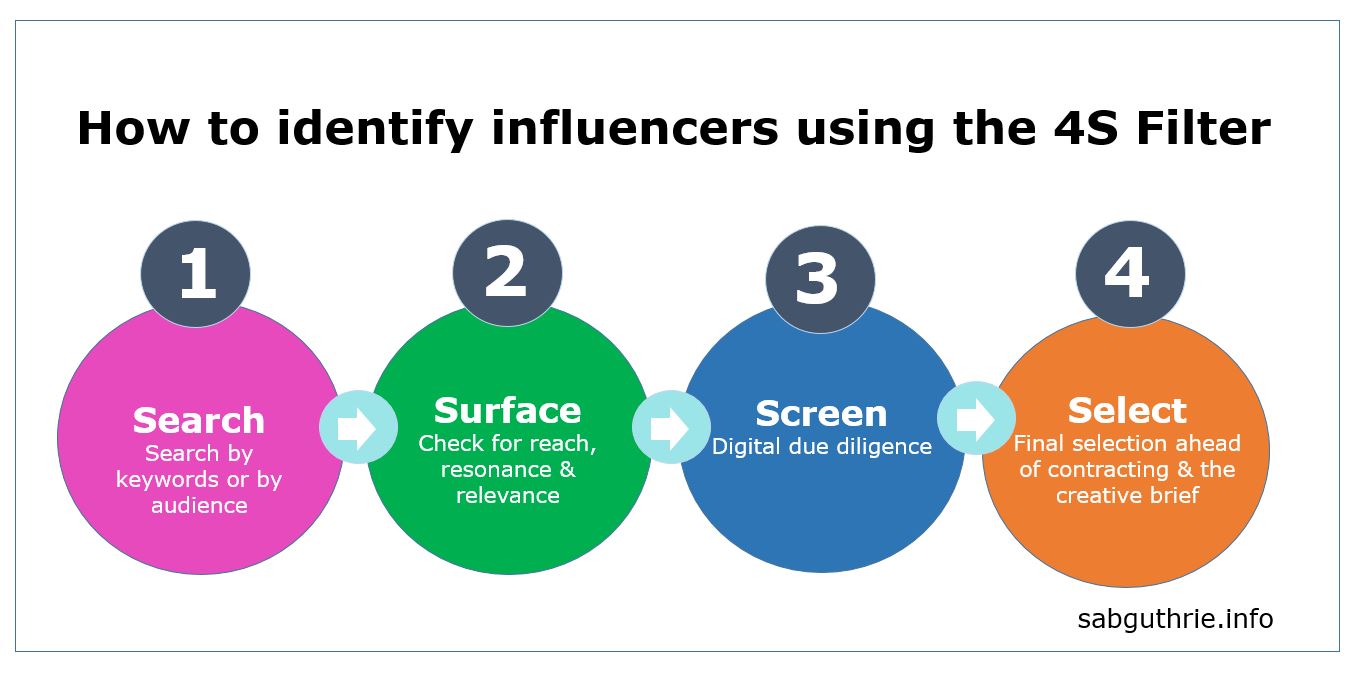 In my 4S Filter I break down the process for selecting an influencer into four parts:

I place a lot of store on the screen phase. The screen phase of the influencer identification four S filter provides you with a safety check. It’s the step where you vet influencers.

The process necessitates the manual consumption of past content and comments. Checking that the influencer’s tone of voice and values are commensurate with those of your brand and its audience.

How far back should you trawl through the content? It depends on the length and depth of the relationship you intend to forge with the influencer.

Influencer marketing as a discipline now recognises that long-term, mutually-beneficial relationships between brand and influencer best serve the brand, the influencer and most importantly, the audience.

Three months is the bare minimum. Best to track back at least a year. That said, the squeaky clean doyenne of the cosmetic haul, Zoella, recently found six-year-old Tweets resurfacing. The ill-judged Tweets provoked her to make a public apology.

Be mindful that some influencers remove sponsored content from the timeline of their social media feeds after a period of time - often 30 days.

If you suspect that your selected influencer is prone to using this tactic proceed with caution. They are deleting sponsored content either because:

If you still opt to work with the influencer ensure there’s a time clause added to your contract.

Make sure you know what your social media influencer did ‘in a previous life’.

Josh Rivers was sacked as editor at the Gay Times after a fortnight in the role over offensive tweets published between 2010 and 2015 whilst Rivers earned a living as a model.

Protect yourself. Get written confirmation that there are no lawsuits past of pending. No bad-news stories about the flare up.

Working with the competition

Which of your competitors has the selected influencer worked for in the past? How much creative was produced? Over what time period? What pipeline work does the influencer have with direct or indirect competition?

Build a non-compete clause of at least three months into your contract.

In the screen phase you’ll find it helpful to tap into the experience of others. If you work within an agency it means capturing, storing, categorising, sharing and using the information of colleagues to build a body of knowledge about the influencers. Check:

Logan Paul won’t be the last influencer to make a morally absent content choice. However, as influencer marketing matures marketers are learning to protect themselves and the brand they represent. By following these few guardrails you should be able to limit risk, too, of the next influencer fail.