Why public relations must embrace digital naturals and ditch the natives

Too many public relations practitioners still think in terms of an online/offline world. But, today, it’s about having ideas fit for the digital world we live in rather than about having digital ideas.

Internet users will pass the 3bn mark in 2015 with nearly half the world’s population, or 3.6bn people, accessing the web at least once a month by 2018, according to eMarketer.

Yet, 44% of PR agency and in-house practitioners in the UK spend less than 11% of their marketing budget on social media/digital according to  2014 survey partnered between PRCA and YouGov.

On the other side of the world the Public Relations Institute of Australia reports that 40% of PR consultancies have dedicated digital services staff in place – though the 2014 benchmark survey does not convert this percentage into ‘bums on seats’; or actual numbers of public relations practitioners.

PRs need to understand that ‘digital’ is not a specialised activity. It’s a fundamental requirement to doing our job today. Understanding big data, how to shoot video, build compelling content ‘marketing’ and then optimise that content for search are some of today’s necessities for any PR person. 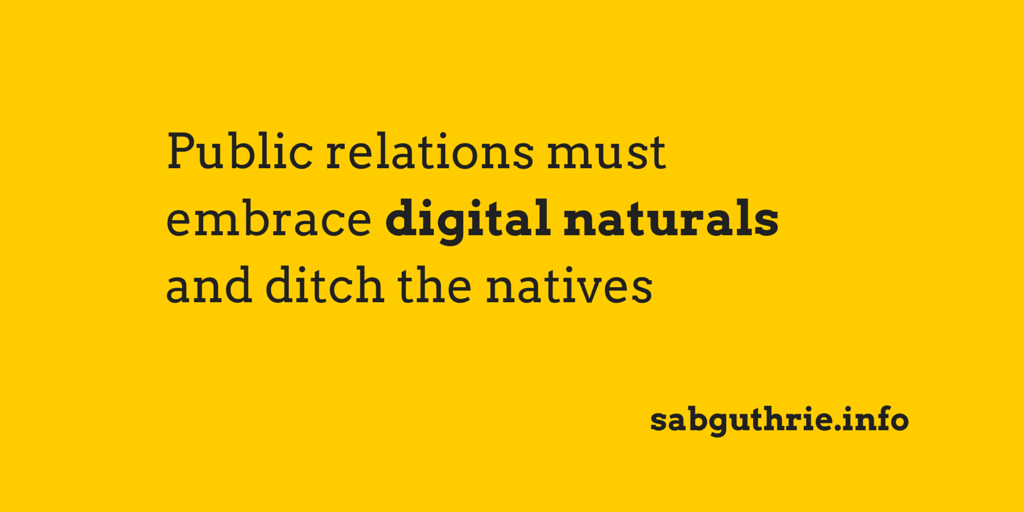 The media world has changed. It’s fragmented. Rob Brown makes the point well in Share This Too asking: Is the Huffington Post a newspaper? And reasoning that it sounds like a newspaper. But it isn’t printed. It contains articles like a newspaper. But largely these aren’t written by journalists. It houses video. So, does that make it a broadcaster?

Platform agnostic: but the content’s gotta be good

From an audience’s point of view asking what type of media HuffPo is, is to ask the wrong question. It doesn’t matter whether it’s ‘traditional’ media (aka ‘legacy’) or born digital. What matters for PRs is that our clients’ audiences read, watch, listen to and absorb content all around them. They are ‘platform agnostic’ – on one proviso: the content’s gotta be good.

And, just as the media landscape has evolved, so, too, have its audiences. In 2001 Marc Prensky coined the terms digital natives and digital immigrants in his now-famous paper.

For Prensky Year Zero is 1980. Those born after this date “are all ‘native speakers’ of the digital language of computers, video games and the Internet”. Those born before 1980 are condemned to be digital immigrants fettered by ‘accents’ of an analogue era as they strive to adapt to the digital environment.

The thrust of his paper is that educators need to refashion their teaching methods to better meet the demands of the new breed of students – a breed he believes “think and process information fundamentally differently from their predecessors.”

Prensky was writing about digital natives and digital immigrants in a pre Facebook, pre Skype, pre Twitter world. As such I have some sympathy for his position back then. But, in the intervening 13 or so years we’ve all grown up alongside this explosion in the social web. No one has an inherent advantage because of their age. To carve up audiences based on age sounds … a bit old fashioned.

Digital naturals: a focus on skills and competences over age

Marja Åkerström and Philip Young have put forward a more useful term:  ‘digital naturals’ describing them as “individuals who are comfortable in an online environment, being equipped through experience and exposure to [the] both its cultural norms and the technological competencies required to operate effectively”.

This turns the use of digital into a mindset or attitude founded on ability rather than on age: “To be a digital natural is to have the skills and competences to operate in the online environment, to treat internet-enabled devices as a routine to daily life, to expect information to be at our fingertips, always available and endlessly abundant. Digital naturals inhabit a place where location and distance don’t much matter and where news travels instantly.”

The issue is that many organisations still tend to make assumptions that their stakeholders of a certain age tend to behave in a certain manner – so underscoring digital’s usage along generational lines. This is to oversimplify and to misrepresent. 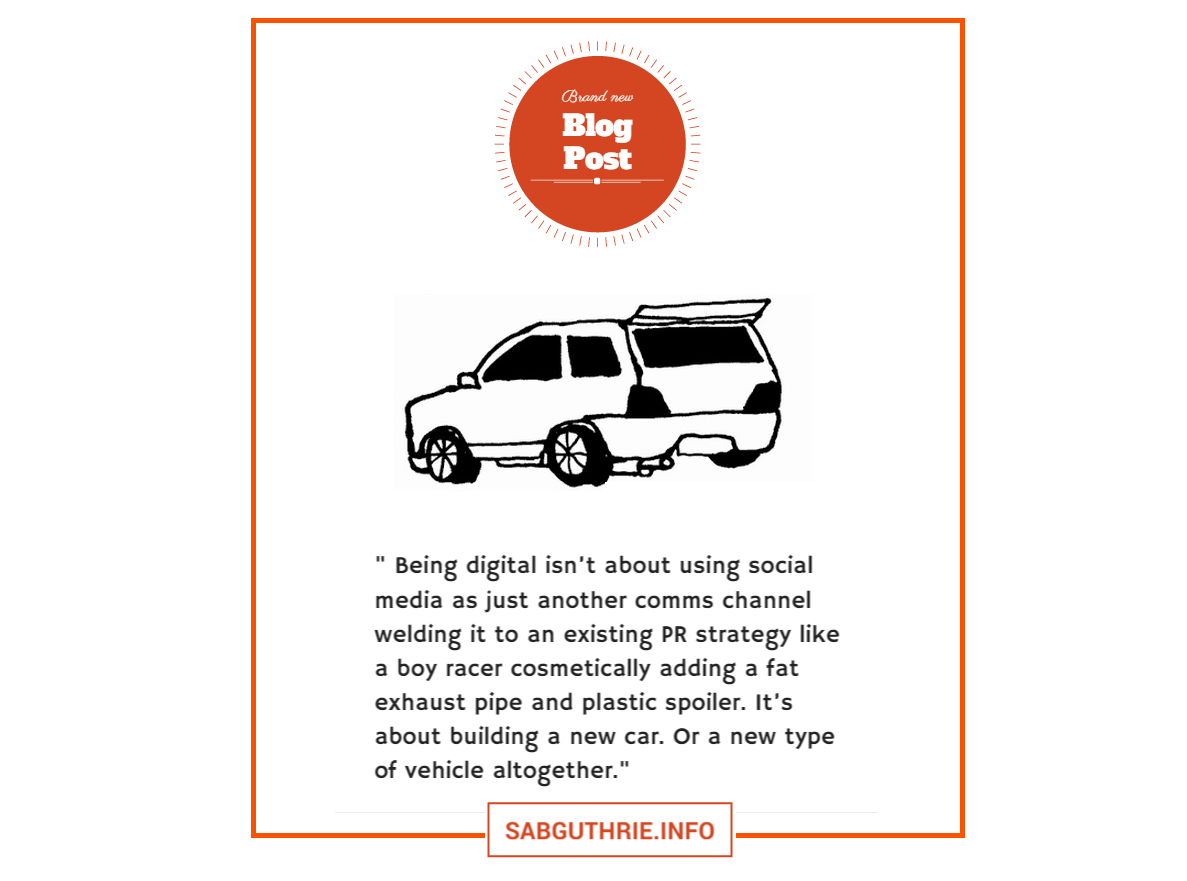 Being digital isn’t about using social media as just another comms channel welding it to an existing PR strategy like a boy racer cosmetically adding a fat exhaust pipe and plastic spoiler. It’s about building a new car. Or a new type of vehicle altogether. Understanding digital naturals will help public relations practitioners understand today’s world. A world in which the line between online and offline has been blurred to the point of being inconsequential.