In today’s world of infinite choice earning engaged voters and consumers is far more valuable to political parties and brands than having merely satisfied ones. This takes a community.

There remains a misconception about what public relations is. We’re still damned as spinners, spammers and practitioners of dark arts.

This post isn’t a moan, though. It looks to an element of modern communication and how political parties, brands and firms might do better if they stop thinking about SOS comms (Sending Out Stuff) and start thinking about forming long-term relationships with their publics.

Public relations always used to be about conversation. Building relationships through listening at least as much as talking.

The industry made a misstep in the mid 20th century. PR became preoccupied with communicating with its employers’ and clients’ publics via the proxy of media relations. This was to the detriment of direct public engagement.

Today consumers demand to be engaged with - not talked at. Fragmenting media caused by technological advances and changing consumer behaviour has forced a return to Eric Goldman’s Two-Way Street.

There’s an increasingly participatory way in which we consume news and information today.

Here’s an example. Want to know what the most shared story on social media about the UK general election was in the week running up to polling day?

It was an article published by London Economic and, to date, it has been shared 205,000 times and clicked 1.5m times.

Why is this particularly poignant? Two reasons:

From information broadcast to intelligence acquisition

The two-way conversations afforded by the social web has meant a shift for PR. It’s a shift from SOS comms (‘sending out stuff’) to pulling intelligence in. From information broadcast to intelligence acquisition.

Once inside the firm PR practitioners help ensure the right areas of the business have access to this intelligence and so make the right decisions.

Engagement based on active ﻿﻿listening

Business leaders need to actively listen to the people around and within their organisations. Their shareholders: sure. Their customers: absolutely. But also their employees, their suppliers, and society at large.

This doesn’t mean flip-flopping on strategy. It does mean having a strategy flexible enough to identify, then embrace, opportunities and threats outside and within the firm and act appropriately.

The social web allows, even demands, direct communication. Business leaders and politicians should ditch the corporate speak and communicate directly with a human voice. Not through unions, or consumer groups or associations.

Business and political leaders should interact often, too. But in a meaningful way. Not by imploring us to follow or like them. But by answering our questions. By solving our problems.

Craig Oliver, who until last year was Downing Street’s director of communications under David Cameron, told BuzzFeed News that a major media transition is underway and the Conservatives don’t understand how to adapt their message. “A lot of traditional journalism is in transmission-only mode,” he said. “You need to find ways to listen and engage.

Oliver is convinced there is a chronic lack of understanding of the scale of the problem in the Conservative party: “I do think there’s a narrowing window of opportunity if you remain stuck on just trying to transmit through traditional forms of media. It’s not either/or, it’s both/and.

Modern communications is about engagement. That means showing up and being part of the conversation wherever the people you want to influence are hanging out. That might be newspapers, but increasingly it's videos and blog posts shared via social media

In today’s world of choice having engaged consumers is far more valuable to brands, firms and political parties than having merely satisfied ones. This takes a community. 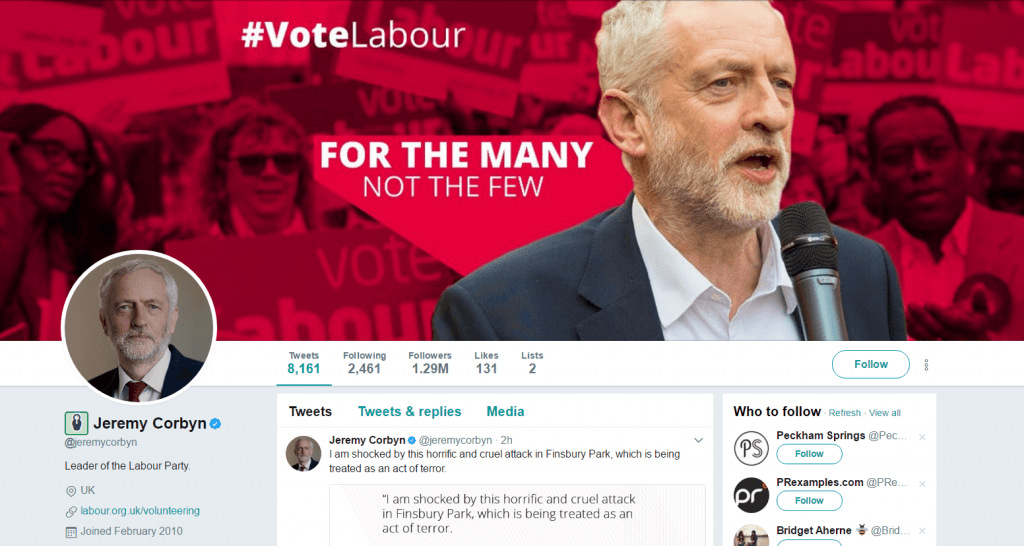 Take a look at the two Twitter profiles above. Don't worry about the follower count for a moment. Instead, check out how many people each of them is following.

Sure, it’s a dumb point I’m making. It’s a style point. But, optics are important. Change needs to be lead from the top.