16 influencers sign pledge with CMA to improve the way they label their social media advertisements.

16 celebrities with large online audiences have agreed to improve the way they label their social media advertisements.

Influencers including singers Ellie Goulding and Rita Ora and TV reality star Louise Thompson will now ensure they will say clearly if they have been paid or received any gifts or loans of products which they endorse.

The formal commitments were made to the Competition and Markets Authority (CMA). Consumer protection law requires influencers to disclose that they’ve been paid or incentivised to endorse a brand. Otherwise, they risk giving a misleading impression that a post represents their personal view about a product or service.

RELATED: Helping influencer marketers be clear when posts are ads

The influencer pledge follows an investigation by the CMA into advertising compliance launched last August.

As part of that investigation the watchdog wrote to a range of social media influencers to gather more information about their posts and the nature of the business agreements they have in place with brands.

Where influencers are paid or rewarded to promote, review or talk about a product in their social media feeds, consumer protection law requires that this must be made clear.

The investigation considered the extent to which influencers are clearly and accurately identifying any commercial relationships, and whether people are being misled. Where the CMA finds practices that break consumer protection law, it can take enforcement action.

The key piece of consumer protection legislation relevant to the CMA’s investigation is the Consumer Protection from Unfair Trading Regulations 2008 (CPRs). Amongst other requirements it is a banned practice to use editorial content in the media to promote a product where a trader has paid for the promotion without making that clear in the content or by images or sounds clearly identifiable to the consumer.

Bringing influencers to book isn’t straightforward however. Ultimately, only a court can decide whether a particular term or practice infringes the law.

RELATED: Influencer post from Made in Chelsea star Louise Thompson banned by ASA

Last September the CMA and the ASA launched a guide to help social influencers stick to the rules by making clear when their posts are ads.

A major takeaway from the guidance is that ads ‘must be obviously identifiable as such'. You need to make it obvious – any label (or other means) you use to highlight the ad needs to be upfront (before people click/engage), prominent (so people notice it), appropriate for the channel (what can you see and when?) and suitable for all potential devices (it needs to be clear on mobile too!).

Speaking about the pledge made by the 16 influencers Andrea Coscelli, Chief Executive of the CMA, said:

“The enforcement action taken by the CMA has seen a number of social media stars pledge to be more transparent when posting online. It also sends a clear message to all influencers, brands and businesses that they must be open and clear with their followers. We will also continue our work to secure more improvement in this space.”

The CMA has not made a finding on whether the influencers’ practices have breached consumer law. All influencers co-operated with the CMA and volunteered to make changes to their practices. The provision of undertakings is not an admission of a breach of the law. As an enforcer under Part 8 of the Enterprise Act 2002, the CMA can enforce the above legislation through the courts. Ultimately, only a court can decide whether a particular term or practice infringes the law.

The CMA’s approach towards social media influencers follows that of watchdogs in other countries. In April 2017 in the United States the Federal Trade Commission (FTC) sent 90 letters reminding influencers and marketers that influencers should clearly and conspicuously disclose their relationships to brands when promoting or endorsing products through social media.

More work to do on ad disclosure

There is a lot more work to be done by influencer marketers, influencers and watchdogs, however, to increase awareness and compliance with laws around advertising. 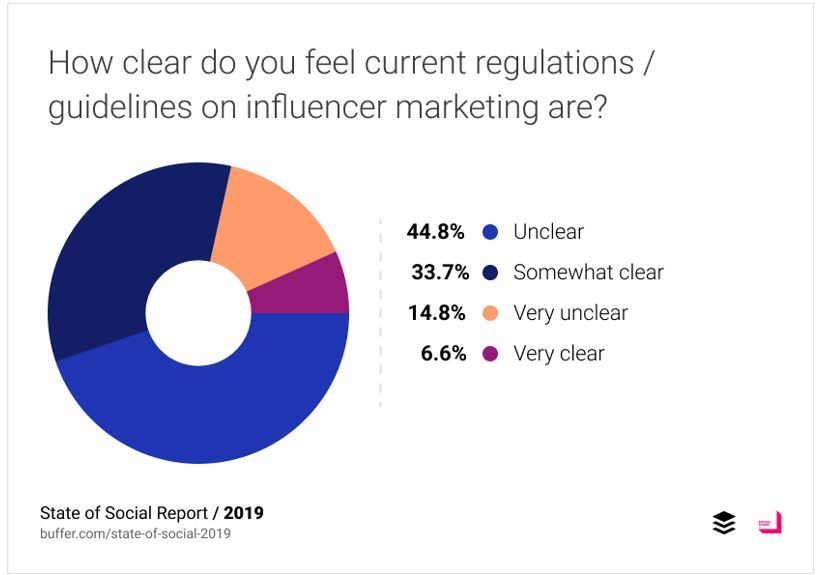