Influencer Marketing post from Made in Chelsea star Louise Thompson banned by ASA as not obviously identifiable as a marketing communication.

Made in Chelsea star, Louise Thompson, is the latest social media influencer to be reprimanded by the Advertising Standards Authority (ASA), for failing to disclose that one of her Instagram posts was paid for.

A complainant challenged the ASA questioning whether the post by Channel 4 structured-reality regular was obviously identifiable as a marketing communication.

Even though Blind Freddy would have been able to tell her sponsored Instagram post for watchmaker Daniel Wellington was paid for Thompson failed to convince the watchdog. In upholding the case, the ASA noted: "in the absence of a clear identifier, such as “#ad”, we concluded that the post was not obviously identifiable as a marketing communication and that it breached the Code."

In her response to the ASA Louise Thompson admitted that the correct hashtag had not been included and the post had since been amended.

sippin’ on yummy coconuts 3x size of my skull ! Wearing my @danielwellington classic petite melrose 28mm watch and matching cuff... you can get 15% off using the code “LOUISE”.

Daniel Wellington AB explained it had a written contract with Louise Thompson which stated that the inclusion of terms of disclosure such as “#sponsored” or “#ad” should have been used to make it directly clear that the posts were ads for Daniel Wellington.

The watchmaker said it expected all of its ambassadors who had marketed Daniel Wellington products to ensure that they complied with applicable rules regarding marketing and that they took responsibility for designing their social media posts as they had agreed to.

Last month an Instagram influencer in Ireland blamed the sponsoring brand for one of her posts not satisfying local regulators. In her response to the the Advertising Standards Association of Ireland  Rosie Connoley the Irish social media influencer with 190,000 Instagram followers said that the sponsoring cosmetic company had approved the images which she had forwarded to them, therefore, the complaint should be addressed to them.

However, the law says brands, PR agencies working on their behalf, and the influencer are all responsible for ensuring that paid-for content is labelled properly and that the disclosure is displayed prominently.

This is not the first time Made in Chelsea stars have fallen foul of the ASA for failing to effectively mark sponsored social media posts. In June 2015 Millie Mackintosh posted a video to her Instagram promoting Britvic’s J20. The UK watchdog found that the ad was not obviously identifiable as such and therefore concluded that it breached the Code.

Rival television structured-reality show The Only Way is Essex is not immune either.  Gemma Collins failed to identify her Twitter posts as sponsored when promoting hairdresser chain Toni and Guy.

The ASA and the CAP Code require that marketing communications must be obviously identifiable as such. Consumers must to be made aware that they were viewing marketing content prior to engagement, meaning that they should know that they were selecting an ad to view before they watched it.

Influencers currently use a range of hashtags or disclaimers in post descriptions or titles. Creators also use Instagram’s ‘Paid Partnership’ feature to flag posts as brand sponsored according to a new report by CampaignDeus, an independent influencer marketing benchmarking and evaluation firm.

There is significant variation both in the usage of different ‘admarkers’ and in their impact post on engagement rates.

The most popular admarker by some distance is #ad, with just over 60% of posts using this. This also has the lowest negative impact on engagement rate. 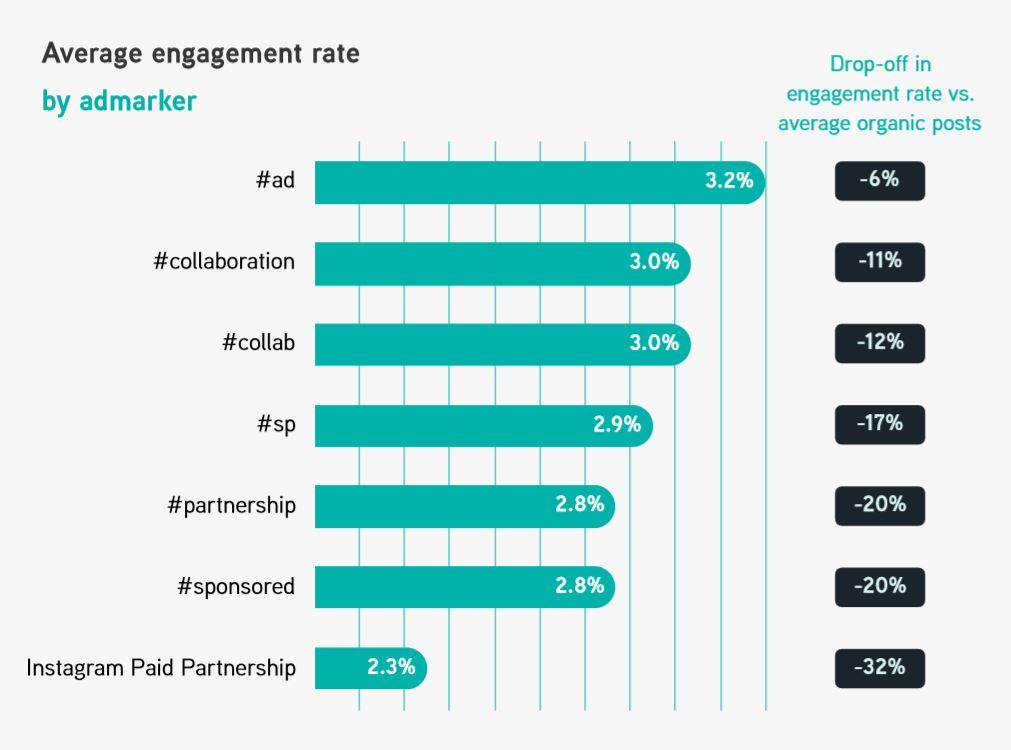 Whilst many brands are still testing the water with influencer marketing DW ascribes to the Australian sporting aphorism: "Go hard or go home." DW has put influencer marketing front and centre of its communications efforts. The brand pays celebrities for sponsored posts and gifts watches to lesser-known micro-influencers. In exchange, they post photos of themselves wearing the watch, often accompanied by a unique money-off code for followers.

The images are high quality and display an attainable luxury lifestyle. Is their approach innovative? Scale of operation aside; not really. Does it work? You bettcha. Last year DW grew its social media follower base by a third (31%) to 3.7m. It generated 137k brand mentions in 2017. In 2016 the company posted profits of around £100m. Not bad for a start-up today entering its seventh year.