Fad or future: Was 2019 the year of influencer marketing?

Influencer marketing is no fad. Big business and big budgets are entering the space. The channel can have a higher calling beyond selling stuff. But it is not without its challenges - disclosure and ethics and influencer fraud remain ongoing issues.

Often when the media covers influencer marketing it more accurately is reporting on Influencer advertising.

Influencer advertising is a subset of the influencer marketing category. It is transactional and short-lived in focus. Work is orientated around tent-pole campaign contracts between influencer and brand. Often driven by 'acquiring eyeballs' - brands become seduced by the influencer’s large following - and the theoretical reach that their branded messages are promised to benefit from.

Influencer advertising promotes one-hit-wonders rather than long-term relationships between brand and influencers. The important skillsets for influencer marketing are twofold: there are hard skills and soft skills.

The media often reports on the disconnect between product and imagery. The discipline probably reached a high-water mark last year with Scarlett Dixon aka Scarlett London and her Listerine activation.

Here London used helium balloons, a sign announcing the time of day, a photograph of herself printed on to her bedspread and taco shells masquerading as pancakes. The activation (shown in the middle image below) was a near exact replica of other brand collaborations London had run all within 12 weeks of the Listerine work. 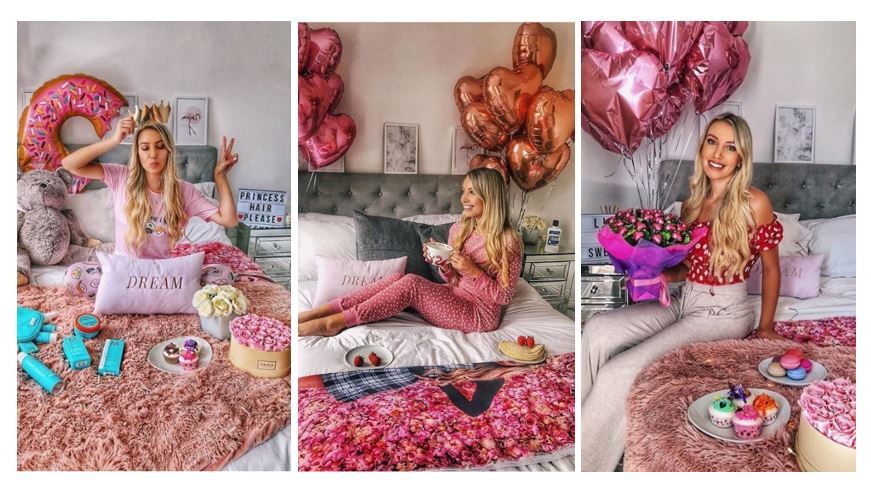 Or the media runs stories about reality TV show contestants turned influencers. People who have amassed large followings on Instagram and who now seemingly sell any product as quickly as possible understanding their window of celebrity is finite.

But this fails to tell the whole story about influencer marketing. How storytellers build and nurture their own communities through consistently creating compelling content. By listening to their audiences. By responding to each comment.  By analysing the data behind each post. These storytellers know what their audiences like. And what they don’t care for.

They create future content based on these insights. With each new piece of content they become more influential to their audience. These storytellers are change agents, often subject matter experts and tastemakers.

These storytellers provide organisations and their brands with distribution as well as creative content.

RELATED: Don’t like influencer marketing? Then offer a better alternative

Emily Weiss was a fashion blogger. She started her blog Into the Gloss in 2010 whilst working as a fashion assistant at Vogue.

Her blog chronicled the beauty regimes of fashion’s elite. She consistently created compelling content. She nurtured her community.

She launched her own products based on listening to that community and testing product and packaging with her community at each step.

Her community became her Research and Development department as well as her customer base.

Today Glossier, the cosmetic company founded and run by Emily Weiss, is valued at $1.2 billion. The company famed for its 'Grammable' packaging, more than doubled its revenue in 2018 and surpassed $100 million.

This year Keith Weed retired as Chief Communications and Marketing Officer at Unilever. Whilst at the global consumer goods company Weed had overseen an annual ad spend or around $6 billion.

His first investment after three decades with Anglo-Dutch company was in Tribe – an influencer marketing marketplace.

Estee Lauder, the company behind brands including Aramis, Aveda, MAC cosmetics, and Clinique now assigns three-quarters of its advertising spend to influencer marketing. Why? Because according to Estée Lauder president and CEO Fabrizio Freda: "75% of our investment now is in digital social media influencers and they're revealing to be highly productive."

Brands are set to spend up to $15 billion on influencer marketing by 2022, up from estimates of $8billion for 2019 per Business Insider Intelligence estimates, based on Mediakix data.

Brands spend around $4.5 billion on influencer marketing via Instagram alone.

The industry is not without its issues.

Influencer fraud - the buying of followers or fake engagement -  is said to cost the industry $1.3 billion a year.

Failing to declare ads as ads is a matter being tackled by bodies such as the Federal Trade Commission in the United States and the Advertising Standards Authority and Competition and Markets Authority in the United Kingdom.

Brand safety. Learning to avoid aligning your brand with an influencer who behaves badly continues to exercise communicators.

Beyond the regulatory requirements lies the ethical dimension - the values, standards and behaviours that influencers and brands alike must uphold.

Image manipulation within influencer marketing spans both regulation and ethics. As consumers, we don’t care to feel tricked by the influencers we follow.

Johanna Olsson was born in Sweden. She now travels the world as an Instagram influencer. Last year fashion company Pretty Little Thing took her to Paris for a brand collaboration.

She was paid to visit Paris. But, apparently didn’t like the resulting background shots so decided to photoshop in ‘better’ backgrounds. 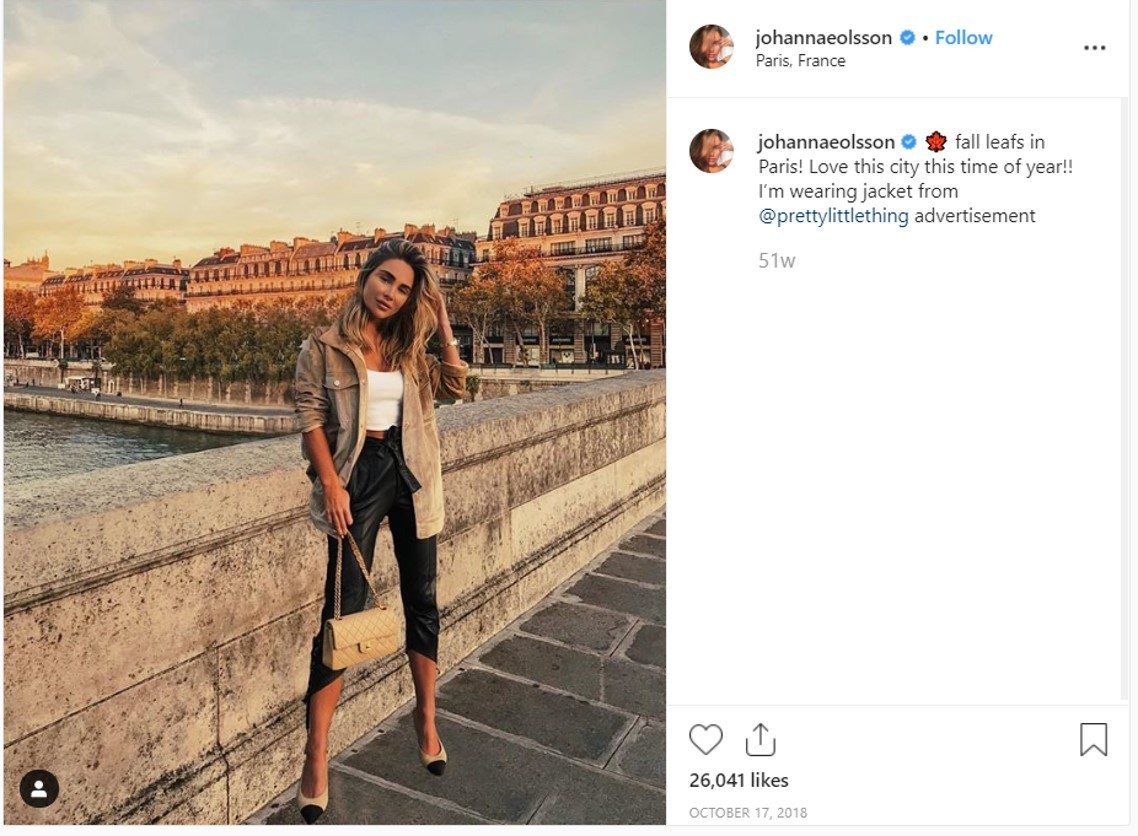 Here she appears to be hovering over a bridge spanning the river Seine. There was a backlash and Johanna published to Instagram Stories trying to explain what had happened and why.

Poor judgement by Olsson. The activation tarnished her brand. It also tarnished the sponsoring fashion brand by association.

As consumers, we don’t like to feel duped through image manipulation. That doesn’t mean that all instances of photoshopping are unethical.

Brita water filters played on the media-promoted idea that travel influencers always photoshop their photos to make the sea appear cobalt blue. To make the beaches: whiter. To lose the clouds.

They set dual objectives for a recent influencer marketing campaign: 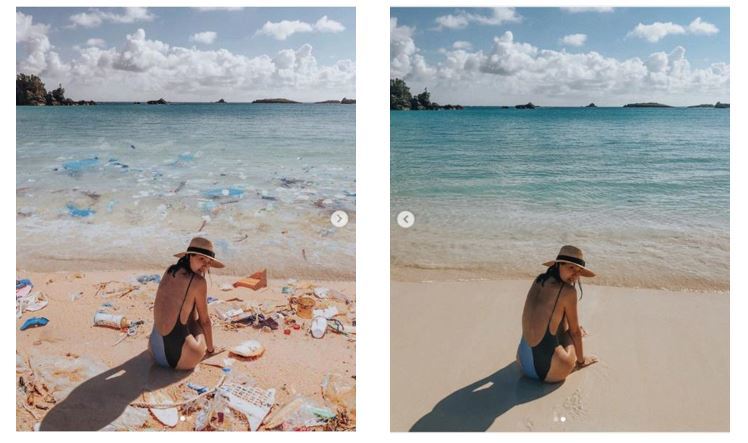 Is influencer marketing a fad? Not all image manipulation is unethical

The company worked with 21 influencers to post personalised Instagram pictures that have been photoshopped to depict natural settings marred by pollution.

The Brita example demonstrates that influencer marketing has the potential for a higher calling beyond 'selling stuff'.

That is why public relations should be at the top table helping to lead the industry. Marketing is “the management process responsible for identifying, anticipating and satisfying customer requirements profitably". PR, however, transcends customers and would-be buyers. It seeks to “establish and maintain goodwill and mutual understanding between an organisation and its publics."

RELATED: Why PR should lead (not own) influencer marketing

When a positive social change is baked into a brand’s DNA it pays dividends.  The Body Shop set an objective of gaining 8 million signatures within 12 months for its petition forever against animal testing in the cosmetic industry. The campaign beat both triggers. It acquired 8.3 million signatures in 10 months.

The campaign was influencer-led, but also worked with user-generated content, the shop put physical petition forms in every shop. There were posters; microsites explaining the reason for the cause. An interactive map tracked which countries were signing up fastest.

The 8.3 million signatures were taken to the United Nations in New York. The campaign continues but now as a public affairs programme.

As a channel, influencer marketing can be utilised by those beyond the orbit of companies. In 2017 NATO ran a training exercise in Romania with armies drawn from 9 different countries.

Seemingly at odds was the inclusion of a Romanian Influencer as part of the press pack. This influencer, a comedian, was invited to film an entertaining piece about the NATO exercise and the Romanian army's involvement. 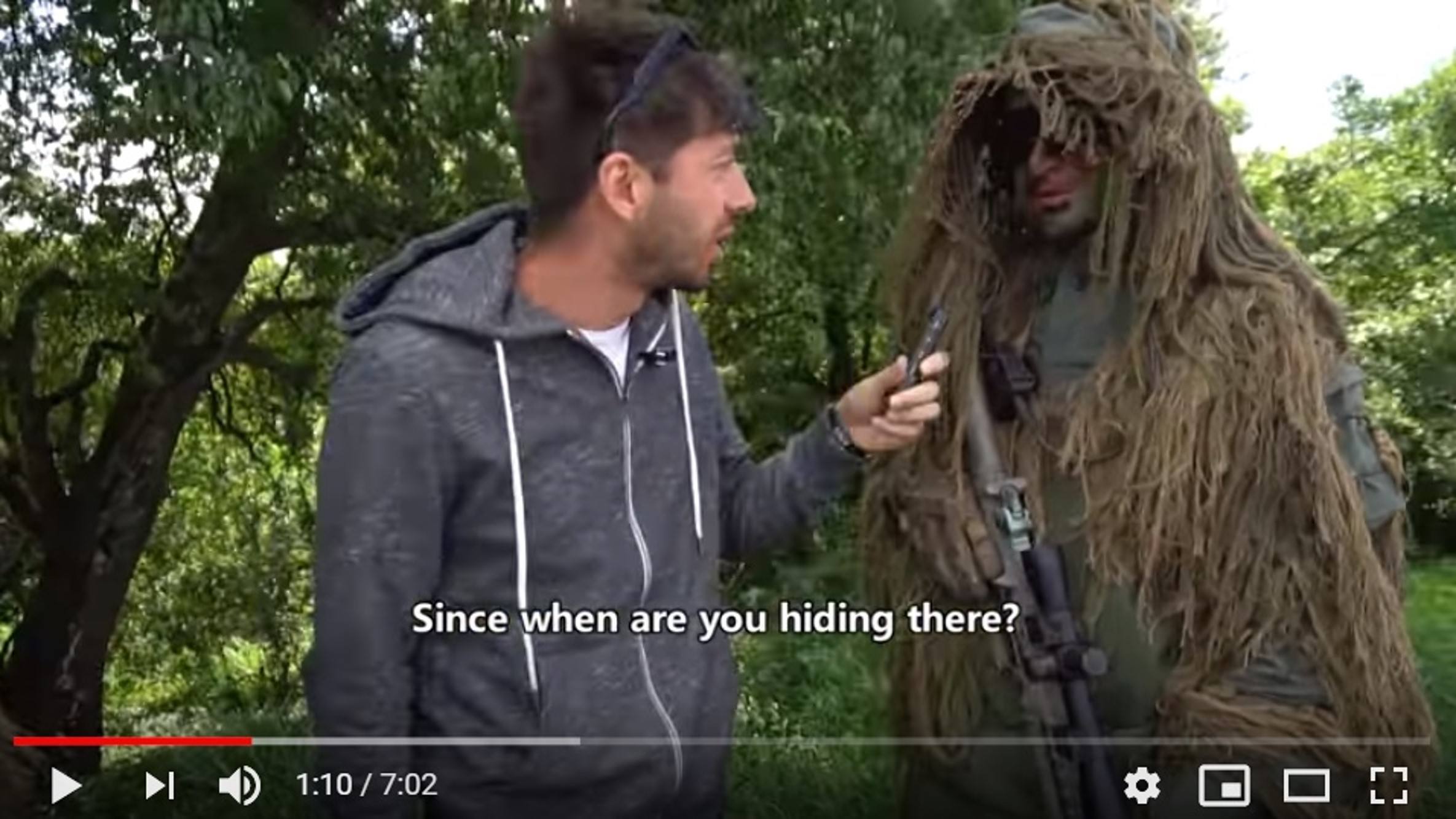 Is influencer marketing a fad: Romanian comedian was invited on press tour with NATO

The Youtube upload is subtle, positive publicity designed to appeal to a younger audience.  The video has been watched and shared hundreds of thousands of times.

It's more than the size of the audience. It's about bringing the message to a new audience. A specific, relevant audience. An audience which until watching the video might not have known what NATO is, nor its relevance.

Romania lies at the very eastern border of the NATO alliance. Ukraine lies to the North and the Crimean Peninsula is just a few hundred miles from its shoreline. Russia was once an ally. Now it's a possible threat. Winning support for NATO from younger generations of Romanians might be won more easily through influencer marketing than from demonstrations of military might.

Saudi Arabia is turning to social media influencers to promote the kingdom as it begins to open up to tourism.

The tactic is part of a broader PR offensive to improve perceptions in line with Mohammad bin Salman's 2030 Vision and diversify the nation’s economy reducing Saudi Arabia’s economic dependence on oil exports.

Working with influencers is a way to side-step traditional media and attract young travellers to see the country for themselves. 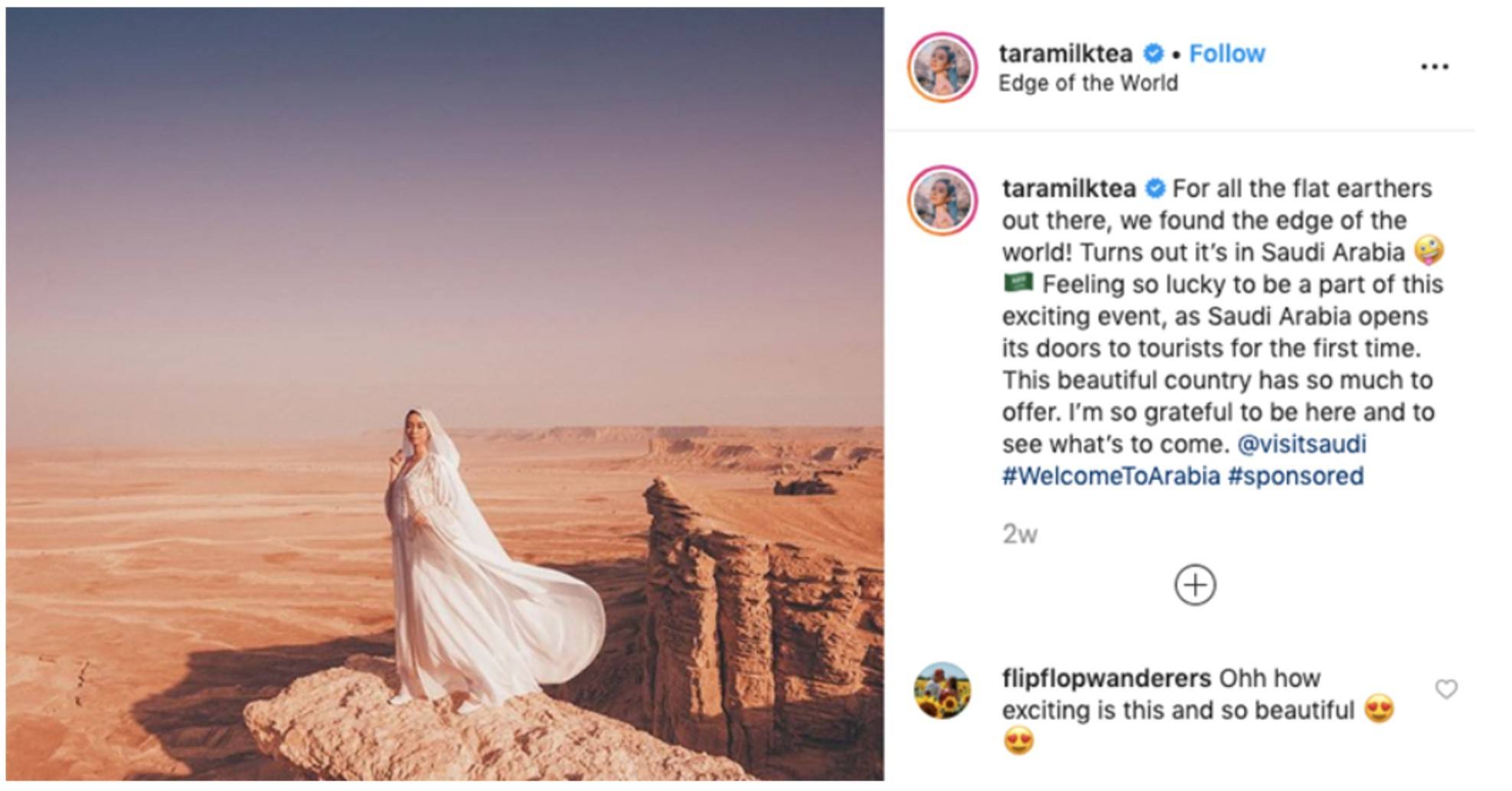 Is influencer marketing a fad: Saudi Arabia harnesses social media influencers to show the world it's kingdom is open to tourism.

The kingdom has planned some of the largest tourism resort projects in the world, including high-end resorts popping up across the Red Sea over 50 islands and 34,000 sq km. The Red Sea Project  – a luxury tourism resort that it says will set new standards in sustainable development and position Saudi Arabia on the global tourism map.

The influencer campaigns are focused on presenting Saudi Arabia as an attractive destination with several world heritage-listed sites.

Is influencer marketing a fad?

Yes, influencer marketing as a channel is good for ‘selling stuff’ but there are other objectives it can be put to work on. For that reason PR should help lead the discipline. The focus is not always customers and prospective buyers but all of an organisation’s publics. 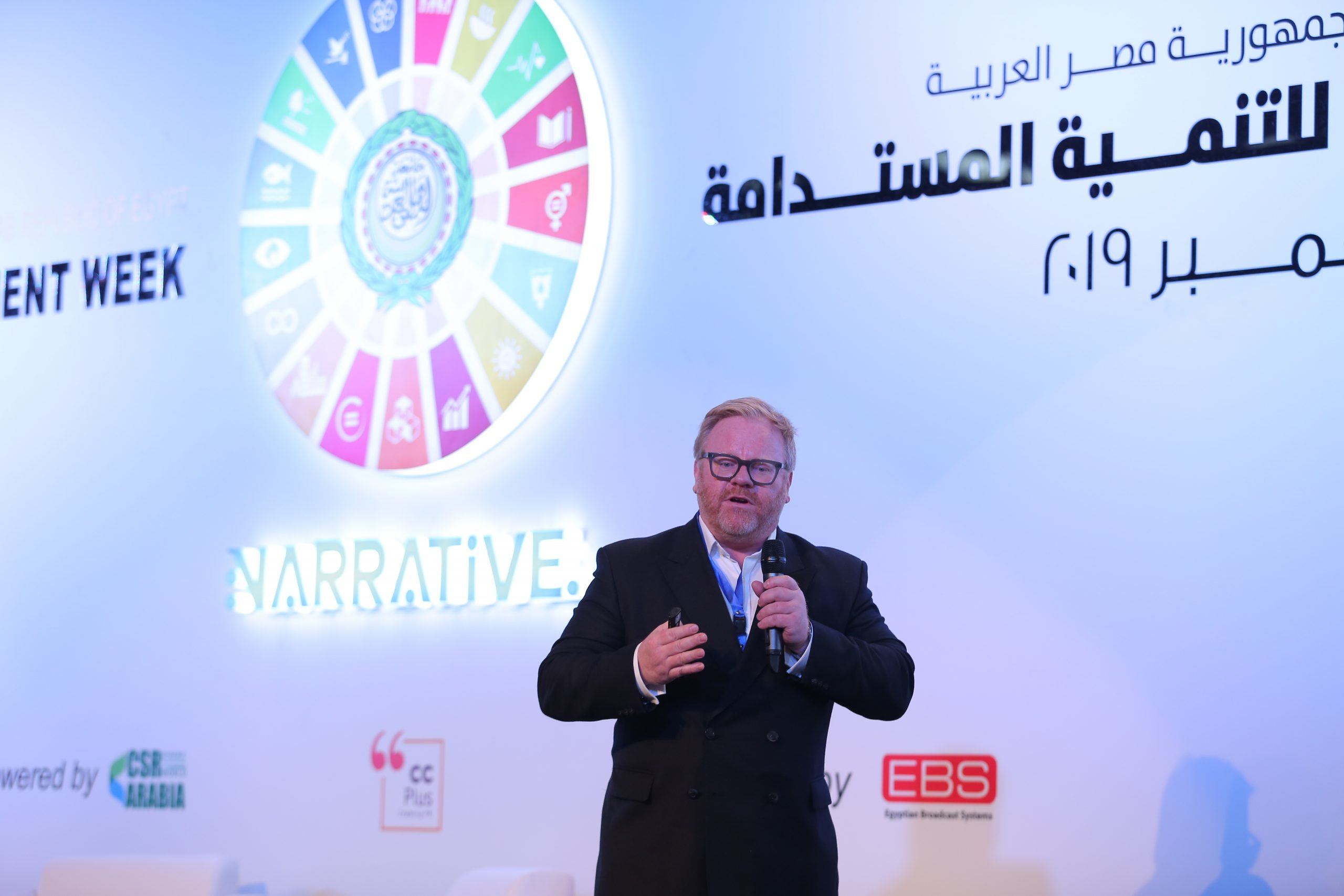 This article was based on a keynote speech I delivered as part of the Narrative Summit in Cairo, Egypt earlier in the month. Narrative Summit is an initiative that aims to create a platform fostering leadership and collaboration with various institutions and partners positioning and promoting the nation brand of Egypt. The initiative was first launched in the form of an international, locally managed PR conference in 2016 by CC Plus, a multi-disciplinary corporate communications firm, with real case studies and an in-depth understanding of the market provided by the industries key experts and opinion leaders – the first conference of its kind to take place in Egypt.