Influencer marketing and the law

Note (Disclaimer): This article does not constitute legal advice. It is offered to PR professionals and marketers who may wish to identify some of the legal issues which surround working with influencers in the UK.

PR practitioners and marketers are increasingly working with influencers to  promote and create content. To help launch products and organise events . To provide SEO and even to assist in crisis management.

Influencers bring with them access to relevant audiences which can help brands build relationships and sell more stuff to their target audiences. But what are the pitfalls and regulations surrounding promotion and advertising in the UK?

This article identifies the legislators, the body which enforces the legislation related to promotion and advertising and offers some suggestions for how marcom professionals working on influencer marketing campaigns can meet business objectives without having their work banned.

Who regulates influencer marketing in the UK?

Product promotion and advertising are covered in the UK under two pieces of legislation:

The Consumer Protection from Unfair Trading Regulations 2008 (“CPRs”) prohibit certain unfair commercial practices. These include using editorial content in the media to promote a product where a trader has paid for the promotion without making that clear (advertorial).

The Committee of Advertising Practice Code (the “CAP Code”) is the rulebook for non-broadcast advertisements. It requires advertising be legal, decent, honest and truthful.

Since 2011 the CAP Code has covered social media too.

Who enforces the CAP code?

When does editorial become an advertisement?

When it comes to influencers creating editorial content be it via vlogs, blogs, Facebook etc the assumption in the eyes of the regulators is that any mention of a brand is an independent decision of the influencer as the “publisher”. If there is a commercial relationship in place, it needs to be made clear.

Under the CAP Code if the content is controlled by the marketer, not the influencer, and is written in exchange for payment (which could be a monetary payment or free items) then it is an advertisement feature and must be labelled as such (rule 2.4): “marketers and publishers must make clear that advertorials are marketing communications; for example, by heading them ‘advertisement feature’.”

Vlogging and the law

In August 2015 the CAP executive published guidance to help vloggers and brands better understand their obligations under the advertising rules.

The guidance is set across 8 sections:

The new guidelines were in response to several high-profile ASA rulings against brands working with vloggers as part of influencer marketing campaigns.

One ruling involved a YouTube video featuring model vlogger Ruth Crilly giving a make-up tutorial using Max Factor products. The video was banned for not properly informing consumers that the clip was an advert for the brand.

The ASA ruled that the video, created by consumer giant Procter & Gamble (P&G), which owns Max Factor, was an “advert rather than an impartial review.”

This was despite P&G’s not inconsiderable efforts to flag the content as sponsored. For example:

In the ASA’s view, P&G did not clearly indicate, for example, that as well as providing a platform for and financing the vlog, the brand had editorial control.

At what point do viewers start to engage with a vlog?

At what point do viewers start to engage with a vlog? When they start to view the vlog right? Wrong. The ASA says viewers must be aware they are viewing marketing content “prior to engagement, meaning that consumers need to know that they [are] selecting an ad to view before they open and watch it”.

At the time of complaint neither the “Beauty Recommended” channel page, nor channel title nor the individual video titles included any text that conveyed the commercial nature of the content.

The ASA also ruled that displaying the tags “brought to you by” or “sponsored by” did not go far enough in notifying viewers of the marketing nature of the videos. Or that editorial control lay with P&G rather than with Ruth Crilly as the influencer.

What influencer marketers should know about vlogs

What influencer marketers should know about the law and Twitter

Whether it’s in return for a free hair colouring or cold hard cash in your sky rocket if you tweet for reward the ASA deems it as sponsorship. Sponsored tweets should be marked up as such. 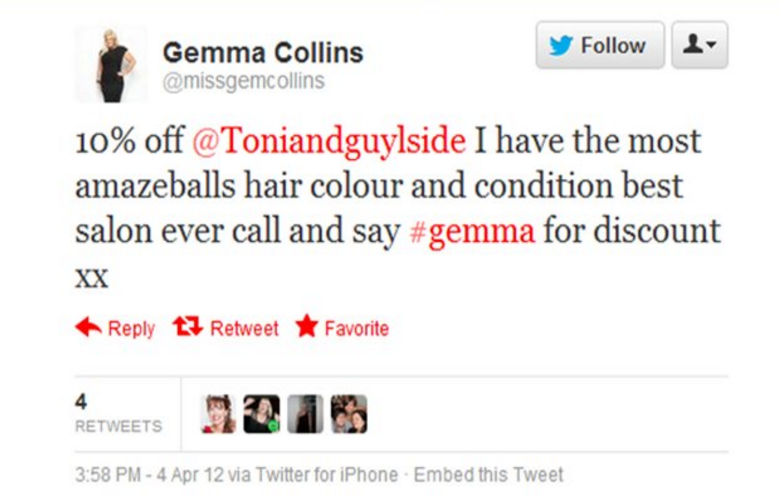 Gemma Collins tweeted “10% off @Toniandguylside I have the most amazeballs hair colour and condition best salon ever call and say #gemma for discount xx”.

The tweet was challenged as to whether it was marketing communications, and should therefore be identified as such.

The offending tweet from Wayne Rooney stated “My resolution – to start the year as a champion, and finish it as a champion…#makeitcount gonike.me/makeitcount”.

The tweet from Jack Wilshere stated “In 2012, I will come back for my club – and be ready for my country. #makeitcount.gonike.me/Makeitcount”.

As with the Gemma Collins case the ASA noted the Code did not just require ads to be identifiable as marketing communications but that they must be obviously identifiable as such.

Use the hashtag #spon or #ad on all promotional tweets. Particularly where the advert may not be immediately apparent as a promotional tweet, e.g., where it is in the form of a celebrity endorsement.

Note (Disclaimer): This article does not constitute legal advice. It is offered to PR professionals and marketers who may wish to identify some of the legal issues which surround working with influencers in the UK.