How influencers gain from Instagram’s changes to feed display

Instagram influencers will benefit from the platform’s changes by listening to their audiences, knowing what their followers want and delivering consistent, high-quality content that their audience feels compelled to interact with

There’s a sketch by British comic double act Morecambe and Wise. In it Andre Previn berates Eric Morecambe for his poor piano-playing skills. “You’re playing all the wrong notes” explains an exasperated Previn. “I am playing all the right notes” is Morecambe’s comeback “but not necessarily in the right order”.

I was reminded of this sketch, a highlight of Christmas television scheduling in the 1970s, when reading the blog post announcing the new way Instagram will start to display feeds. “As we begin, we’re focusing on optimizing the order — all the posts will still be there, just in a different order.”

So, Instagram has tinkered with its algorithm. Soon we’ll no longer be able to see all of our followers’ content in reverse chronological order. Will this be music to our ears? Instagram say it will.

Instagram told us the change is to make things better. Deep down we all know the change is because Facebook, Instagram’s parent, is putting the photo and video-sharing social media platform into harness. It’s time to start earning its corn and pay back the $1 billion price tag Facebook paid for it in 2012.

Apparently “people miss on average 70 percent of their feeds” or so we’re told in the Instagram blog post See the Moments You Care About First.

As remedy the good folk at Instagram will change the way our feeds are displayed. “To improve your experience, your feed will soon be ordered to show the moments we believe you will care about the most.”

We’re reassured that it’s merely a re-ordering job: “As we begin, we’re focusing on optimizing the order — all the posts will still be there, just in a different order.”

The more cynical of readers may take the words “as we begin” as a warning of things to come.

And, if we use the change in Facebook’s algorithm as a yardstick, then organic reach will, one day, all but disappear.

According to Advertising Week the average reach for posts from Facebook pages in March 2015 was 2.6%, dropping to 2.27% for pages with more than 1 million likes.

Brands cry boo hoo at the feed display change. But what do they expect? It’s one of the pitfalls of building your brand on rented land. For Instagram influencers, however, the changes may even be a good thing.

Influencers with high engagement levels will do well

Influencers producing compelling content will be rewarded. There will be an even greater emphasis on creating images that audiences respond to.

Tracie Nall, community manager at Sway Group – an agency which manages influencer programs – told the SocialTimes: “Engagement will now push views and resulting impressions in a way it never has before.

“Influencers will need truly engaged followers to build and guarantee awareness – a large audience is not merely enough.”

The shift in the way the feed is displayed will pull importance away from celebrities who don’t engage with their followers. Instead the power middle and rising-star-influencers with smaller audiences but with high engagement rates will become more in demand. In this new world big is not always beautiful.

High engagement follows when an influencer knows her audience well

Influencers are influential because they consistently create compelling content that resonates with a select audience. The content resonates because it’s authentic. It’s communicated in a human voice. It’s created for the community; built with insights from the community.

Influencers will benefit by producing quality over quantity

Conscientious influencers grow their impact as change agents by listening to their followers, engaging with them and tweaking their content each time to make it ever more relevant to them.

According to Kyle Wong, CEO of visual marketing platform Pixlee and quoted in Digiday: “Instagram’s new algorithm feed puts an emphasis on quality of content, not quantity of content. Brands will have to prioritize strategies that maximize their relevance and engagement rates rather than pure following and reach.” 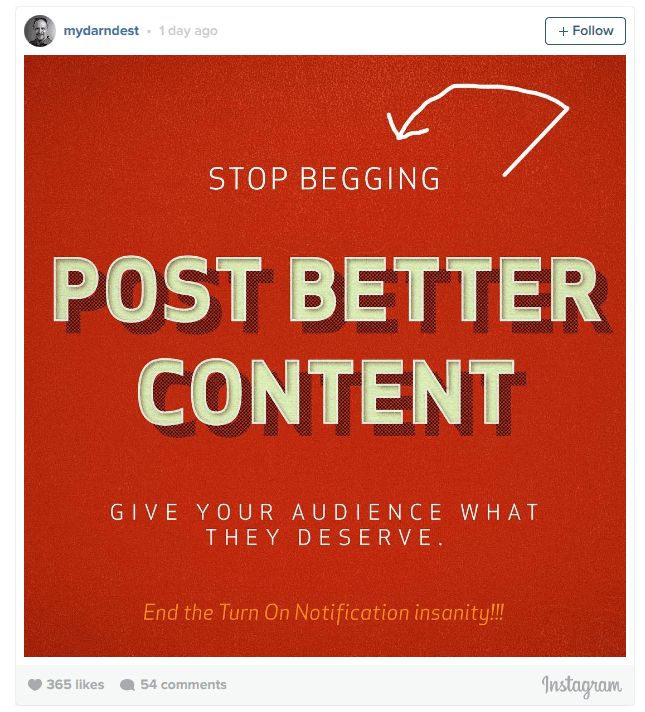 Higher financial reward for influencers who get it right

Influencers will get that Jerry Maguire feeling as brands start to demand of them: “show me the money.”

Influencers will be placed under pressure to perform. Those who get it right, cultivating engaged, active communities relevant to brands’ audiences will be well compensated.

Not everyone has welcomed the changes in the feed display. Since the announcement many brands have attempted to hack the feed by encouraging their followers to click the notification button and receive all of their content. Ultimately though improved engagement through consistently high-quality content will be the only true ‘hack’.

Will this be the last of the nudges to the feed display? Not on your nelly. It will be tinkered with over the months and years.

Will it be all stick and no carrot from the good folk at Instagram? No way. Earlier today they announced longer video. Coming soon creators will be able to tell their stories in up to 60 seconds of video.