A key growth area for influencer relations is via video. Why? Because 95% of 16-34 year-olds watch video clips online each month. And, according to GlobalWebIndex, 44% of all internet users watch vlogs on a monthly basis.

We identify with vloggers because we feel as though we can relate to them. We enjoy watching their unvarnished lives. We believe they listen to us as subscribers. They respond to our comments and tailor their content to repeat the type of work which drives the most engagement.

However, in my chapter (which is available here on Kindle by the way and is a top 10 PR and marketing Kindle book — laying it on a bit thick?) I sound a note of caution. 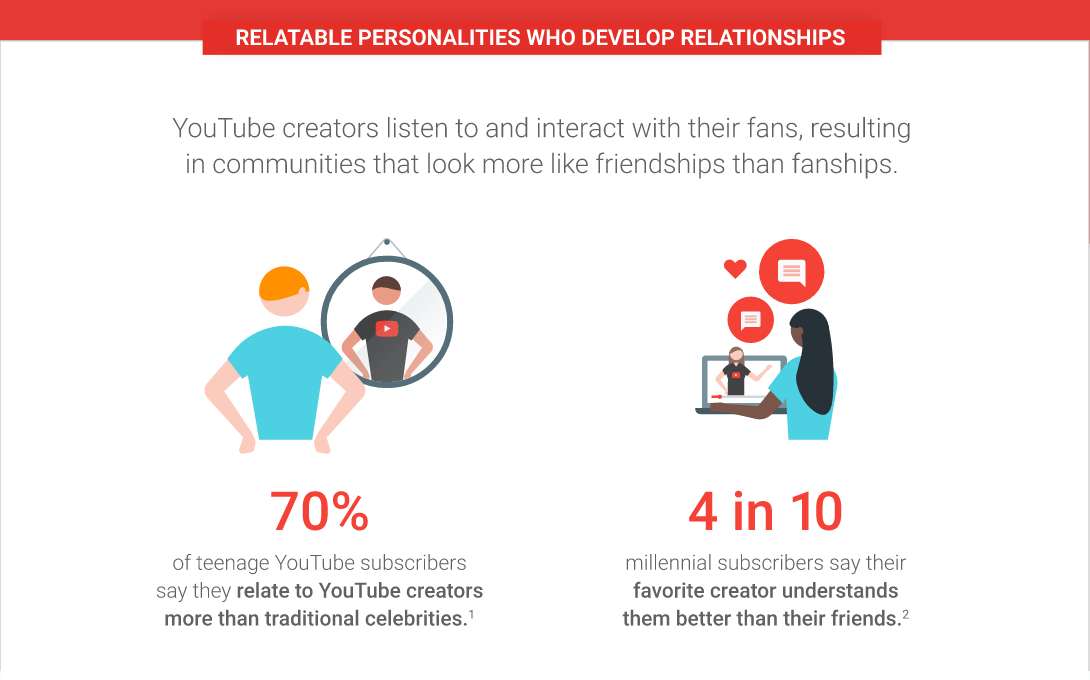 With viewer percentages as high as the statistics shown above it’s only natural that other social media platforms will want to bolster their video offerings to access this rich seam of advertising revenue.

Over half of Facebook active users watch videos on the network. The Wall Street Journal reports that the social media monolith is making moves to also dominate live streaming video content. It is attempting to woo Snapchat, Vine and YouTube influencers to experiment with its Live Video feature.

Linkedin, too, has embraced video for its influencers. The professional network has launched 30-second videos from influencers to capitalise on the B2B market.

Engagement is the key to influence

YouTube understands that at the heart of influence lies engagement. This week it launched Community as a public beta service.

Writing on its creator blog YouTube told vloggers that the new Community tab on their YouTube channel affords a new, simple way to engage with viewers and express themselves beyond video.

“Now you can do things like text, live videos, images, animated GIFs and more, giving you easier, lightweight ways to engage with your fans more often in between uploads, in real time.

“Viewers will be able to see your posts in the Subscriptions feed on their phones. They can also opt into getting a notification anytime you post.”

This Community page allows creators to run a mini-social network of sorts on their channel’s page. Techcrunch points out that this is an important move for Google after the demise of its technically-superior, though poor-performing social network: Google+.

“This is an important move for Google, which has historically struggled to get social right, as seen with the failure of its Facebook competitor Google+. The company once tried to bake Google+ into YouTube itself, with disastrous results. …

“In terms of making YouTube more of a social community than it already is, the Community tab makes more sense than a destination social network like Google+, as it effectively gives the creators the ability to talk directly to their fan base, and drive sort of social engagement the company desires.”

And it’s not just YouTube that desires social engagement. Brands creating influencer marketing relationships with vloggers are also driven by engagement. It’s influences who can manage to cajole their following into action who are the real influencers. Not those with the largest follower numbers.

YouTube will hope its new Community will be seen as positive move by creators who recently became incensed at the video-sharing platform’s decision to tighten up its advertiser-friendly policy.

Creators argue the Google-owned site is starving them of revenue by demonetizing content which doesn’t comply with the guidelines.

Influencers who post content which breaches these guidelines risk their video not being approved for monetization. Additionally YouTube reserves the right to suspend monetization features on channels that repeat offend.