How much of the Coinbase Superbowl ad creative was invented in-house by Coinbase and how much was 'borrowed' from the pitch deck of a creative agency? The tail of a Twitter thread gone wrong.

Coinbase CEO, Brian Armstrong, took to Twitter on Monday eulogising about his firm’s successful ad which ran during Superbowl earlier this month.

In the thread Armstrong wrote: “initially an outside agency pitched us a bunch of standard super bowl ad ideas. I didn't like any of them. … So we went back and brainstormed, came up with a bunch of wild ideas. … We were running short of time, and one of the original ideas we had included putting a QR code at the end. This was partially inspired by Reddit’s superb owl commercial at previous super bowl. Key insight was if you can only flash something on screen for a moment people will google it later - how do we get them from TV to phone to convert.”

The thread reads like a super helpful explainer. Kristen Cavallo CEO at creative ad agency, The Martin Agency, remembers things differently, however. “It was actually inspired by presentations our agency showed your team on 8/18 (pages 19-24) and 10/7 (pages 11-18) with ad concepts for the Super Bowl with floating QR codes on a blank screen”, replied Cavallo to Armstrong’s Tweets.

Coinbase’s CMO then waded in replying to Cavallo. Kate Rouch wrote: “Multiple agencies - including The Martin Agency - pitched us ideas that included QR codes for several different campaigns. However none of the ideas from any of our partners were conceptually what we were looking for and remained on the cutting room floor”. 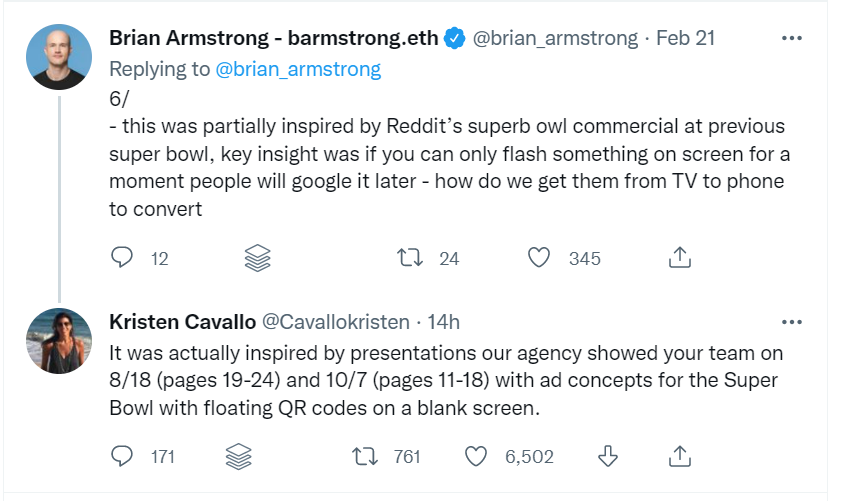 It then gets worse - or better, depending on whether you’d brought popcorn to this Twitter ‘discussion’ “It’s always tough when an agency of record is chosen right before a CMO starts” wrote Rouch. She continued, “ultimately when I onboarded I made the call that the Martin Agency wasn't a fit for Coinbase. They are a strong agency and I am sorry they left the relationship with a bad feeling. Breaking up is hard to do. I wish the team at The Martin Agency all the best."

Cavallo has since Tweeted saying “My tweet was not about IP. I wrote because his [Armstrong's] thread could easily have been a celebration of creativity and breakthrough thinking, versus claiming credit and disregarding agencies. I'm advocating for @Accenture as much as I am for the industry.” Coinbase ultimately turned to Accenture Interactive to execute the creative.

Agency world is awash with similar stories of borrowed creative ideas resulting from failed pitches. Should these realities be built into the pricing model? Should agencies call out these brands? Could Cavallo be on the receiving end of a legal case? In Armstrong's thread the Coinbase CEO writes that the firm "submitted the ad for approval and got a lot of pushback on whether we could run it at all, i won't get into details here but it required some special meetings, indemnity etc." Perhaps Cavallo has now broken a confidentiality clause.  And where does Accenture Interactive fit in this? Were they satisfied as to ownership of the creative they were executing? In short: Is this an agency chief calling BS on shady brand practice? Or is it an agency chief with sour grapes at being passed over in favour of another agency? Either way, the optics aren't great for Coinbase.

Updated 22 Feb 2022 16:48 UK time: The Martin Agency CEO, Kristen Cavallo took to Linkedin today publishing a post which began: "Yesterday I responded to a tweet thread, and my comments struck a chord. Perhaps this is an opportunity to create positive change for the industry.

"My tweet wasn’t about IP or credit; I understand multiple agencies can arrive at a similar idea. I objected to the dismissive tone of the thread and the denigration of ad agencies. I felt compelled to respond to the bravado of, 'No agency would have done this ad', because in fact, an agency did'".

Cavallo ended her post: "I wrote because somebody needed to. Not because it was one agency’s idea vs. another. But because the whole thread was unbecoming and unnecessary. And in this case, incorrect."