PR isn’t dead – but it needs a fresh expression

‘Trust Me, PR is Dead’ by Robert Phillips: book review

Robert Phillips’ new book: Trust Me, PR is Dead examines many core themes of today’s complex, chaotic, and messy world. But it is as change agent that the book is at its most powerful. 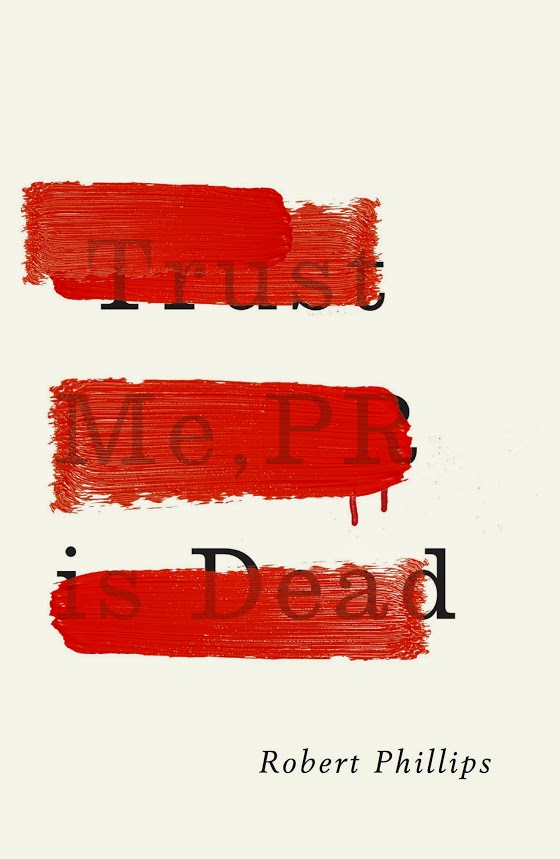 Within public relations there is a perennial debate about whether the discipline is a subset of marketing or whether it can fulfil a higher calling – that of a strategic management function.

The debate has been raging for decades – at least since 1984 when the research foundation of the International Association of Business Communicators (IABC) commissioned a research programme to explore how PR could elevate itself from a media relations and publicity shop towards one which encapsulated strategic thinking.

Robert Phillips, in his new book Trust Me, PR is Dead, believes PR is doomed. He sees it as a discipline still defined by a preoccupation with media relations and publicity. A discipline which, in Robert’s eyes, is no longer  “either relevant or compelling as a practice, in its current form”. As a replacement he proposes the new, enlightened discipline of public leadership.

I like this book. I like the pace of the writing; the immediacy in its style and the often self-aggrandising vignettes Robert paints. Him with Putin. Him with the European Roundtable of Industrialists. Him in Paris presenting to the Organisation for Economic Co-operation and Development (OECD).

I like the cheap peep show thrill of the redacted text which culminates in the absurdity of an entire section of the book – an anecdote about Starbucks – being blocked out.

Most of all I like Robert’s thoughts on capitalism, society, and contemporary communications. But to re-use and adapt a line by Mandy Rice-Davies which Robert uses as a chapter opener ‘I would say that wouldn’t I’. We have obviously been reading many of the same authors and texts and come to similar conclusions.

On capitalism, for example, Robert believes – as I do – that maximizing shareholder value is a busted flush of a concept. Jack Welch, former CEO at General Electric said back in 2009 “on the face of it shareholder value is the dumbest idea in the world”. Robert writes: “Profit optimisation is acceptable. Profit maximisation, to the detriment of the greater good, is not”.

And while, on occasion, Robert sounds a little like Willy Loman complaining about his broken refrigerator in Death of a Salesman. He is probably right when he asserts “somewhere between the mid 1960s and the turn of the millennium (Western) society lost its sense of citizenship, as we were were engulfed in the rush towards consumerism.”

Profit with principle is a central theme

Profit with principle is a central theme of the book and, Robert believes, it is the place of public leadership to help organisations in their pursuit to become better and more relevant within society.

Paul Polman, CEO of Unilever, is quoted in the book saying “Capitalism isn’t dead – but it needs a fresh expression”. I have exchanged the word capitalism for PR as the title of this article. Because whilst Robert’s points are very well made about radical transparency, reciprocal vulnerability, co-production, citizen centricity and corporate social responsibility – amongst others – where Robert sees a schism within public relations and a need to invent public leadership I see best practice in modern public relations. Many of these themes have already been explored by PR writers. The work of current Global Alliance chairperson Professor Anne Gregory immediately springs to mind.

Edward Bernays was a publicist not a PR man

For Robert PR remains defined by publicity and media relations. Edward Bernays gets a name check eight times throughout the book to the exclusion of all other PR leaders and thinkers save for Daniel and Richard Edelman and Harold Burson. But, Bernays was a publicist, a propagandist. A manipulator. Not a PR man.

On the subject of media relations Robert tries to drive his point home by referencing two journalists’ views on public relations. Emma Jacobs writing in the Financial Times and Robert Peston, Economics Editor at the BBC.

I’ve written before about Emma Jacobs’ FT article: Publicity is Free with no PRs. I made the point that her article picked a handful of examples to back her case for DIY ‘publicity’. But her examples included US billionaires, and UK private equity experts rather than the ‘average’ buyer of PR services.

And whilst Jacobs tells us Warren Buffett ‘spurns spin-doctors’. She omits to mention that for the last nine years Buffett’s investment company, Berkshire Hathaway, has owned Business Wire – a global distributor of press releases and financial announcements. Buffett certainly knows the commercial value of good publicity.

To my mind Robert Peston, in his June 2014 Charles Wheeler lecture was simply playing to the crowd – giving journalists what they wanted to hear. I have touched on this point, too, in the past when critiquing a lecture given at a PR event by Ian Burrell, the Independent’s assistant editor and media editor.

The fact that these high-profile journalists have such a dated view of public relations is both a detriment to them in not keeping abreast of industry changes but also to the detriment of PR leaders in failing to educate them.

Trust Me, PR is Dead works on several levels

As a book title Trust Me, PR is Dead works on at least four levels:

Public relations is not a profession

Of the four, the last couple of points interest me the most. As Robert points out in his book PR is not a profession. There is no minimum academic or experience threshold as a barrier to entry. No requirement to keep up continuing professional development once in. No sanctions for malpractice. As such there are good practitioners and bad practitioners. Those who strive to innovate. To push the discipline forward. But equally those who get stuck in a moment in time. Fossilsed. It is this lot to whom Robert is speaking when proclaiming that PR is dead.

Eric Hoffer is attributed with the line: “In times of change, learners inherit the earth, while the learned find themselves beautifully equipped to deal with a world that no longer exists.” I take it that Robert’s title is a call to arms. A plea to the discipline of PR to reinvent itself. He begins chapter one with the subheader: ‘the only agency we need is change’. It is a cliche but true that in today’s complex, messy and chaotic world ‘change’ is the new ‘business as usual’.

Successful change outcomes at an industry level are the collective result of individual change – of PR practitioners doing their jobs differently.

An intelligently designed new methodology that isn’t widely used won’t produce the best, desired, performance improvement. The bridge between a quality solution (like the Barcelona Principles replacing AVEs) and realising the benefit is individuals embracing and adopting change.

Change management initiatives fail when they start with the education bit. The ‘how to’ element of embracing the new process. How to master the new tactic. How to adopt the new behaviour. Perhaps this is why the Barcelona Principles have struggled to be bedded down as the default metric five years after creation.

This process starts with those affected by the need to change becoming aware of the situation. And, what Professor John Kotter refers to in his seminal book Leading Change as building a ‘sense of urgency’ to do something about it. In dire occasions, this may mean building a burning platform. An ultimatum. Do or die. Trust Me, PR is Dead could be just that jolt the discipline of public relations needs to adapt to a new world.

Trust Me, PR is Dead is available now via unbound books.

An earlier version of this post made reference to Robert Phillips in Davos. Since publishing Robert has contacted me to say that “he was never at Davos”. I am happy to amend the text accordingly and apologise for the incorrect attribution. I could have followed the, now predominant, digital publishing mantra of “never wrong for long” and quietly substituted Davos for OECD, but, today’s trust building and trust preservation depends upon radical transparency and radical honesty. Just ask Robert – or read his book.