RESET: How to Restart Your Life and Get F.U. Money – a book review

25% of us hates our job - the remainder is not fully engaged. A new book aims to redress the balance and help us become financially independent.

Globally, almost one-in-four of us hate our jobs while a further six -in-ten are “not engaged” at work according to a Gallup global study. David Sawyer has a plan to solve this problem.

Writing in the opening of his new book RESET: How to Restart Your Life and Get F.U. Money Sawyer makes a bold claim:

“This book is my creed, the truth as I believe it to be. A unique plan for midlife professionals to reset and restart their lives. I promise that after you read RESET – and carry out its recommendations – you’ll be happier at work and home, better/proud at your job and have a practical financial independence/early retirement/escape plan. It won’t happen overnight, but without taking drastic action such as quitting gainful employment, within a year, you will have transformed your future.”

It's a ballsy start; a bold claim.

Throughout RESET we’re introduced to people like Brendan (don’t call him Bren - he doesn’t like it) and Mary Fazackerley. The Fazackerleys are thumb-nail portraits designed to draw us, the reader in, and walk us through the book’s concepts. Many of us can relate to Brendan. He is our Leopold Bloom, our Arthur Dent, our Charlie Brown. Brendan is our Everyman. He’s 48 and a comms director. He struggles with the household admin and feeling the need to be on call with work 24/7.

He goes on holidays and upsizes his home, upgrades the family car, too. He succumbs to presenteeism - crunching through 200+ emails when he’s supposed to be watching his son play football.

We can all see elements of Brendan's life in our own. Then, Brendan takes stock of his present circumstances and does much care for what he sees.

Brendan is one of us.

Set over 40 chapters gathered into 6 parts Sawyer walks Brendan and us, the reader, through:

Whatever industry you work in, digital is transforming it. However, for the midlife careerist, who’s already busy, such innovation is seen more as a threat than an exciting opportunity: the last thing we have time to do is “get with the digital programme”.

Whether you’re a lawyer, accountant, PR, chief executive, engineer or scientist, reasons Sawyer, the fundamentals of your job haven’t changed. But digital skills have given those who have grasped them, opportunities to do many tasks both quicker and at scale.

Chapter 11 is titled: How to harness technological change to build your influence, raise your profile and future-proof your employment. RESET offers its readers a 25-point plan to conquer digital fear. The chapter gallops through insights such as which third-party tools to use. How to read business books to get the most from them. How to transform the dead time of the daily commute into protected learning time.

For me the financial independence section was the most illuminating, though. Sawyer explains F.U. (fuck you money) and FI (financial independence) are like the yang and yin of FIRE (Financial Independence Retire Early). FI is the positive yang: having enough money that you can live off the income from your assets and never have to work again. F.U. Money (the menacing yin), is having enough money that you never have to do anything you don’t want to for money ever again. 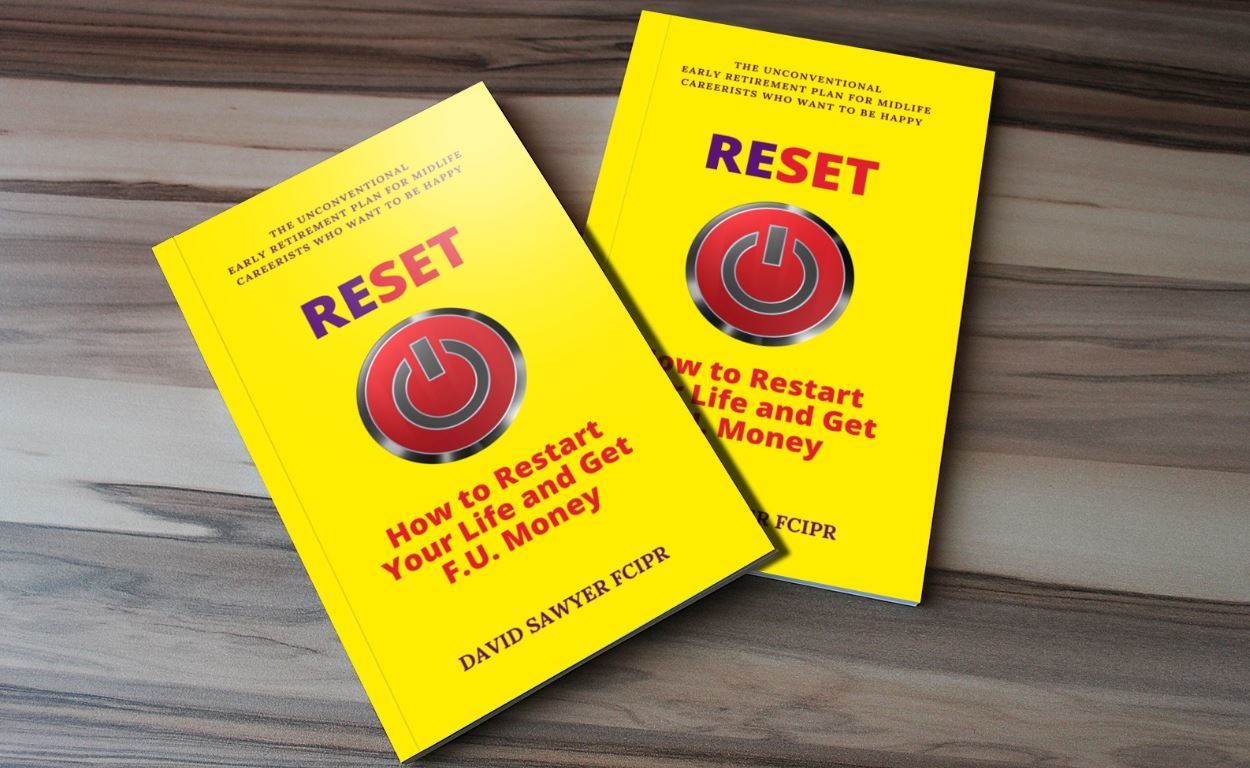 There’s a clue in financial independence’s name as to its benefits: freedom, lifestyle choice, time tokens, the bandwidth to live life on your own terms.

After laying out the principles of FI, RESET drills down into their practical use by describing the four fundamental constituents of financial independence. This is the heart of the book, what Sawyer terms as his “easy-to-remember set-and-forget early retirement plan.

It was learning these four fundamentals, and following STEPS A-D, that made me think financial independence was possible for my family.” Learn here about:

Sawyer’s creed laid out at the start of RESET is absolute. We’re seduced via his quotidian writing style and analogy into understanding often complex issues within the book. Sawyer does, however, acknowledge that change is not easy. And so, objection handling is tackled head-on early addressing push-backs such as being too old to change, being too busy, or lacking willpower.

RESET is painstakingly researched - It carries 511 notes and citations. But erudition is not confused with fussy writing. Sawyer’s style is deceptively airy given the subject matter. I enjoyed this book. and if you are anything like me and Brendan you will enjoy - and more importantly - learn something from RESET, too.

About the author, David Sawyer

I’ve only once been in the same room as David Sawyer. It was at a book launch for PR Stack hosted by Stephen Waddington, Ketchum Partner and Chief Engagement Officer. Both David and I had contributed chapters to Stephen’s business book.

For the past year or so we’ve enjoyed a monthly Skype call. The aim: to discuss new approaches to client work and customers, to talk about the industry and, more recently, to think aloud as the idea of RESET gradually took form.

I was delighted to be one of David’s alpha readers making comments and suggestions via Google Docs.

David Sawyer is the winner of 11 worldwide PR awards including the first PR award from the United Nations. He runs Zude PR a Glasgow-based PR and digital marketing agency. Prior to that he was the head of Weber Shandwick Glasgow PR office 2009-2014. He has written for Social Media Examiner, MuckRack, PR Moment, PR Daily, Business 2 Community, and SEMrush and is a fellow of the Chartered Institute of Public Relations.

Where to buy the book

RESET: How to Restart Your Life and Get F.U. Money: The Unconventional Early Retirement Plan for Midlife Careerists Who Want to Be Happy is available to buy at Amazon as a paperback or Kindle edition. You can read more about the book on Sawyer’s business website.