From a crowd-sourced spreadsheet in December to the launch of a free web app today and Twitter Chat later this week the #PRstack community is gaining momentum as it characterises the public relations third-party tool market mapping them against the public relations workflow – writes Scott Guthrie.

The brainchild of Stephen Waddington, Chief Engagement Officer at Ketchum and past president of the Chartered Institute of Public Relations, the community is born from the sense that whilst third-party vendors talk up their products in terms of features there is limited understanding of how an individual tool fits into public relations’ modern workflow. And, more importantly, how these tools pull together to help PR practitioners create meaningful outcomes for their clients instead of simply more outputs.

Split up into sections including media relations, owned media, influencer relations and community, #PRStack, gives the PR industry easy access to a growing list of industry tools which anybody can contribute to.

I’ve been following and contributing to this project since December when Stephen shared a Google document via Google+. It’s hoped the project will continue to grow as more vendors, agencies and industry influencers contribute to the open source dataset. 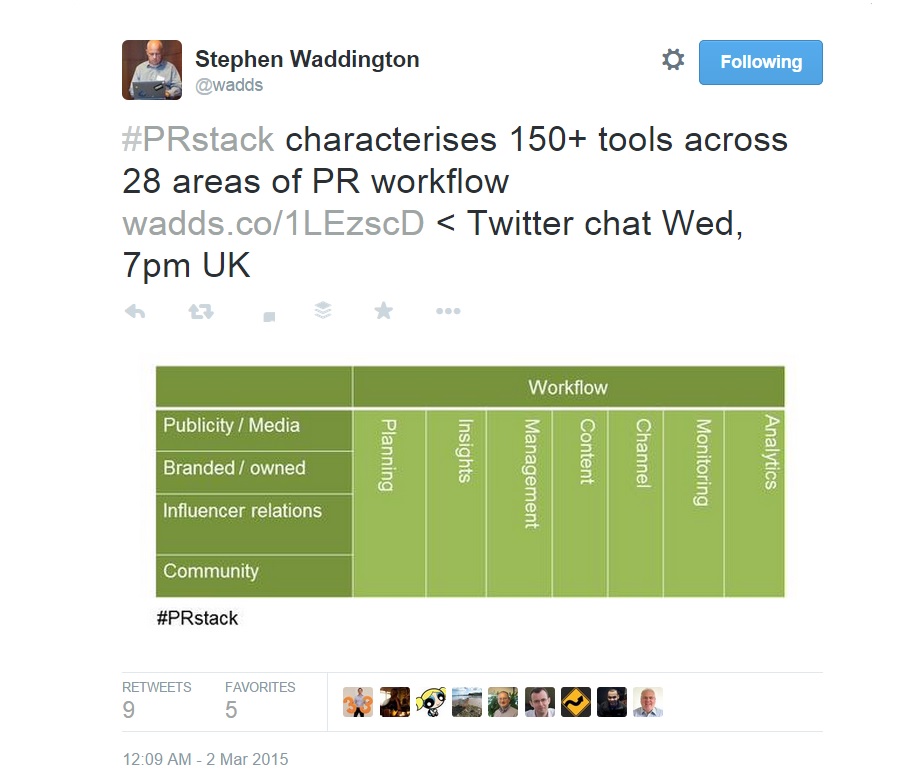 Today, Prezly, a storytelling platform for brands, launches PRstack.co – a free web app which sits on top of the #PRstack database making it even easier for PR practitioners to find the right third-party tool for the right point in the workflow.

Prezly is also launching today PRgeeks.co a knowledge base of guides, tips and tricks to help you use those tools effectively.

Join Stephen Waddington as he leads a #PRstack Twitter chat to discuss the project and the public relations tool market.