Kylie Jenner, Snapchat and a warning for Vine 2.0

Whether founded on fact or fuelled by media speculation Kylie Jenner`s Tweet about Snapchat is a timely reminder for Vine 2.0 as rumours gather pace of a 2018 (re)launch.

When Kylie Jenner Tweeted on February 21: "sooo does anyone else not open Snapchat anymore? Or is it just me... ugh this is so sad" Bloomberg was quick to pick up the story. The business site, ran an article the next day titled: “In One Tweet, Kylie Jenner Wiped Out $1.3 Billion of Snap’s Market Value”

sooo does anyone else not open Snapchat anymore? Or is it just me... ugh this is so sad.

Kylie Jenner, the 20-year-old reality TV star, cosmetic firm founder and one of the most popular Snapchat users, Tweeted again later that day declaring her love for the photo sharing platform, "still love you tho snap ... my first love".

By then it was too late, the media story had already gathered momentum.

still love you tho snap ... my first love

Was Kylie Jenner's 88-character Tweet really responsible for sinking the company's stock by 6.1%?

No. There are other factors at play within Snap and outside in its operating environment.

The graph below shows Snap's share price was sliding well before Kylie Jenner's February 21st Tweet. Sure the share price fall gathered pace the day after the Tweet was posted. BUT this was also the day SNAP INC Filed its 10-K  - its annual report required by the U.S. Securities and Exchange Commission (SEC), that gives a comprehensive summary of a company's financial performance. 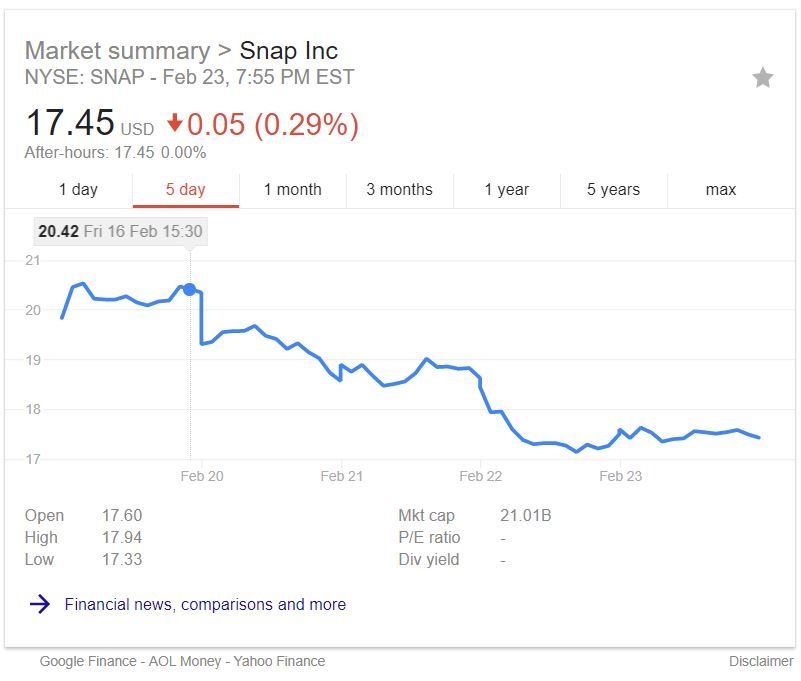 When Snap spurned Mark Zuckerberg’s advances to buy its youth-oriented platform for $3 billion in 2013 Snapchat created a powerful enemy. Ever since, Facebook’s sister platform, Instagram, has been stealing Snapchat features and improving them for its own users.

Snapchat relies on Google Cloud for the vast majority of its computing, storage, bandwidth, and other services. Any disruption of or interference with its use of the Google Cloud operation would negatively affect its operations and seriously harm its business.

Combined, Snap's Evan Spiegel (CEO) and Robert Murphy (CTO) flex 94.6% of Snap's voting power between them. There's a board of directors, but ultimately what Spiegel and Murphy says, goes.

Such a concentration of voting shares and executive clout raises an additional risk. If either Spiegel or Murphy were to leave the company there would be a leadership void which would be difficult to fill.

The platform's recent redesign has not been received well by users. Over a million people have signed a petition at Change.org to reverse the design change. This dislike for the new interface may be temporary. If it lingers it presents a potential risk from a typically fickle user base of 18-34-year olds.

Snap doesn't have a dedicated head office. Instead its offices are dispersed in various cities the US and abroad. There is a potential risk to loss of corporate memory and morale.

So, there are many risks surrounding Snap beyond negative publicity. Even Brexit gets an honoury mention in the 10-k documentation (item 1a risk factors p28).

Whether founded on fact or fuelled by media speculation the Kylie Jenner story is a timely reminder for Vine 2.0 as rumours gather pace of a 2018 (re)launch.

Founded in 2012, the original Vine was a short-form video app that allowed users to capture, loop, and share 6.5-second clips. Shortly before the app’s official launch in 2013, Twitter acquired Vine for a reported $30 million.

After a host of problems during its four-year life, however, Vine’s social platform was axed on January 17, 2017.

Vine co-founder Dom Hofmann is now developing Vine 2.0 without Twitter. The relaunched app slated for release later in 2018 goes under the code v2.

i'm going to work on a follow-up to vine. i've been feeling it myself for some time and have seen a lot of tweets, dms, etc.

One of Vine’s chief issues was that there was no way for influencers to make money directly through the platform. Whilst Facebook and YouTube both offer options for creators to share in the revenue they generate.

In autumn 2015, after noticing declining engagement and views, 21 top Vine influencers approached Vine’s creative development lead with a proposition, where each would make 12 Vines a month (3 per week) for $25.5 million ($1.2 million per person).

According to Mediakix, an influencer marketing agency, the Viners suggested improvements to the platform, which included:

Both the monetary request and platform suggestions by top influencers were rejected by Vine, as was other creator feedback. Influencers felt like Vine didn’t support them.

I tried to tell vine multiple times ideas to save their app... but they didn't want to listen ¯\_(ツ)_/¯, they thought they had it on lock

A short while later both Vine influencers and their audiences voted with their feet and left Vine for good. A move not far removed from Snapchat's original treatment with its influencers and subsequent fallout.

The Kylie Jenner, Tweet about Snapchat seen through this lens becomes more than a celebrity's supposed ability to move markets. It becomes a tale of traditional media bashing social media platforms with bad publicity and a cautionary tale for those same social media platforms to pay attention to to the people who bring high traffic figures to their sites.