James Charles’ Instant Influencer is everything wrong with our industry

It appears I’m in the minority, though. Episode 3 aired last Friday and has already been viewed 9.5 million times. The format is tried-and-tested. Six contestants are pre-selected by Charles then, each episode he puts them to the test to find out who has what it takes to become a beauty superstar and win $50,000 and the title of Instant Influencer.

Friday’s show featured the contestants having to create an apology video. The episode starts with Charles standing in front of the six contestants. Tellingly he refers to them as actors. The choice of word is not incidental. “I honestly feel like you all owe me an apology,” he tells them before bowing theatrically and ending his performance with the words: “and, scene.”

Charles explains to the slack-jawed 20-somethings, “take this from me because I've had to deal with this. As an influencer, when you grow a following, you will either say or do something that people might not like and might not agree with, and eventually you might have to apologise. So, for today's Compact Challenge, you guys will be filming your very own apology videos.”

The contestants then have 15 minutes to film a one-minute, unedited, video. The misdemeanours for which the contestants must apologise are picked at random - written on the inside lid of cosmetic compact mirrors:

“I had a family emergency, and it just was too heavy on my heart for me to come.” ran the script for Gabriel, the contestant tasked with apologising for a no-show to a fan meet-and-greet.

“My nose looks so much thinner than it does in real life, it's because I have a Squidward nose” ‘blubbed’ Benny, the contestant apologising from over-editing photos - make up running down his cheeks as if from tears.

“Hopefully, this will not be training for the future, but if it is, now you know exactly what to do," beamed Charles. "Two of you guys really impressed me today. Gabriel, your honesty and your message really came across, and I felt like I was literally watching your apology.  And also Benny. You prepared so well for this challenge. Ruining your makeup takes a lot of dedication, and you really took it to the next level. Congratulations, Benny. You are the winner of today's Compact Challenge".

Well butter my crumpets. What a pile of tosh. Gabriel's 'honesty'? Dedication of ruining your makeup? It's tosh and dangerous tosh to boot. 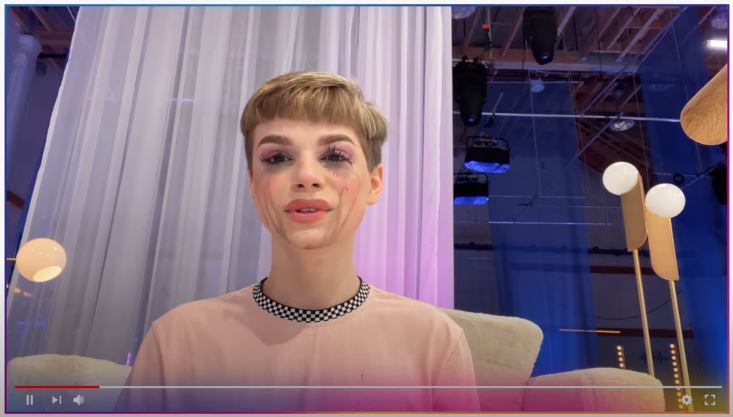 James Charles - Instant Influencer ... Benny wins the Compact Challenge for best apology video. To be absolutely clear the mascara-run cheeks are the result of liquid applied just before his apology video.

The art of the apology

When you make a mistake the people wronged want to be sure of three things:

The faux apologies reproduced in the show were lacking on all three counts. Apology is now seen as more performance art than a gateway to redemption. Apologies should be based on an emotional connection and an internal moral compass. They shouldn’t be acted out as part of a process of being seen to go through the motions.

Online stars and people featured in structured-reality TV series like ‘Made in Chelsea’ or ‘The Real Housewives of …’ have perfected the art of the non-apology. The “sorry if …” or the “sorry but …” apology. The saccharine artifice is at odds with a central tenet of influencer marketing: the importance of authenticity.

The entire conceit of the show is wrong. James Charles and his guest-star-drop-ins can help you become a better make-up artist. They can help you create slicker-looking content with higher production values. But whether or not you become influential is beyond your gift - and theirs. That reward belongs to your audience. Influence is an outcome, not an output. The audience is sacrosanct. Lose your audience. You lose your influence.

Real influencers are community custodians they realise the relationship with their followers is two-way and they take time to strengthen that bond. They don’t take their followers for granted or worse treat them with contempt.

Influence is accretive. It is founded on consistently 'showing up' and creating compelling content which resonates with a specific audience. There is nothing instant about influence. It's a hard slog.

Charles knows scandals well. In May last year he lost close to three million social media followers after accusations by one-time mentor Tati Westbrook that the make-up influencer had manipulated several people’s sexuality - oh and had promoted rival-brand vitamin supplements. The scandal put into jeopardy Charles’ YouTube channel, career and a host of friendships. He should appreciate the importance of sincerity, and learning from past mistakes.

Is Instant Influencer entertainment? For sure, 9.5 million views and 51,700 mainly positive comments tell us the show has mass appeal. Can Instant Influencer help you become an influencer? No. And this is the larger issue with the show as it is part of a YouTube Originals series.

Unlike Instagram YouTube has a long, positive history helping creators hone their craft on the video-sharing platform. The YouTube Creator Academy was launched in 2013 and offers advice on topics such as content strategy, ways to make money and channel optimisation for would-be creators.

Perhaps there is a subtlety in language being used here. Perhaps the difference lies within the use of the word creator and influencer. Influencer is increasingly considered a pejorative term often associated with Instagram and BANJO influencers. Creator is more frequently used by YouTubers and embraced more widely as a descriptor by subject matter experts and those who strive to build communities around the content they create.