Intelligent naivety: Benefits of not knowing how we do things around here

Too much store is placed on industry experience. Today’s world is complex and uncertain. All hail intelligent naivety – writes Scott Guthrie

In today’s volatile and uncertain business world it’s hard to predict the future. As public relations practitioners we need to develop and apply a constructively critical eye when considering PR’s models and concepts.

PR is both a complex and a rapidly changing discipline. Models and theories should be thought of in terms of guidelines rather than detailed roadmaps. Used for description. Not followed with prescription.

Managers usually progress vertically within a specific industry. As they’re promoted they embrace certain values as their own. They become fluent in jargonese. They master specific skills. They gain experience.

What is experience anyway?

Is Dave more experienced that Ruby if he sits at his desk for five years, keeping his head down, churning out the same content. Using the same PR tactics based on the same models, and theories. Whilst Ruby has only worked there 18 months. But she’s thought differently about the same problems. She’s used solutions that have worked in other industries to solve problems in this category. She’s used different tactics. She’s asked different questions to different people.

It took me several goes to pass my driving test. Does that make me more experienced at the examination process? No, it just meant I was a clumsy driver to begin with. 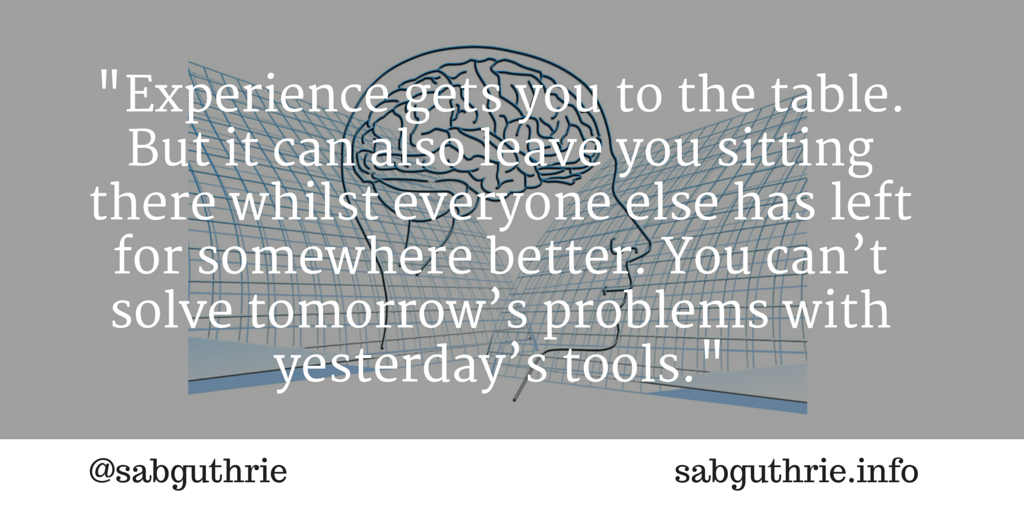 Intelligent naivety not same as being contrarian

Intelligent naivety isn’t the same thing as being a contrarian. It’s not about doing the opposite to convention for effect. But it is about questioning that convention. Taking it to task.

Experience gets you to the table. But it can also leave you sitting there whilst everyone else has left for somewhere better. You can’t solve tomorrow’s problems with yesterday’s tools.

Instead PR professionals could do worse than to embrace what Adam Morgan calls the ‘vitality of inexperience’ in his excellent book Eating the big fish: How challenger brands can compete against brand leaders. Especially when working in new industries.

We’re taught that category experience is crucial. That our industry has unique qualities. But category inexperience – if nurtured appropriately – can be an asset rather than a liability. It allows for the status quo to be challenged. To envision fresh possibilities. To ask ‘why do we do it that way’ – and not to put up with the answer – ‘because we’ve always done it that way’.

I’ve written before about how critical thinking is a bedrock-skill of the modern communicator and a way to solve big problems is to ask one small question: ‘why?‘

Adam Morgan (p37) writes to embrace intelligent naivety is “to bring a fresh and dynamic set of questions to the category, a set of questions that deliberately breaks with the immediate past of the category … and looks at what we can learn from other categories – both in terms of what we can bring that is new, and also in terms of which bits of so-called wisdom we need to unlearn in order to break through.”

Intelligent naivety allows us to ask fundamental questions that the rest of the industry is too close (or closed off) to ask anymore. To question why relationships with consumers and the way we’ve organised our business around these consumers have to be the way they are.

Often it’s the nature of the relationship we have with our publics which needs to be changed in order to succeed.

Albert Einstein is widely credited with saying “The definition of insanity is doing the same thing over and over again, but expecting different results”.

We need to be asking different questions and hunting for our answers in different places. 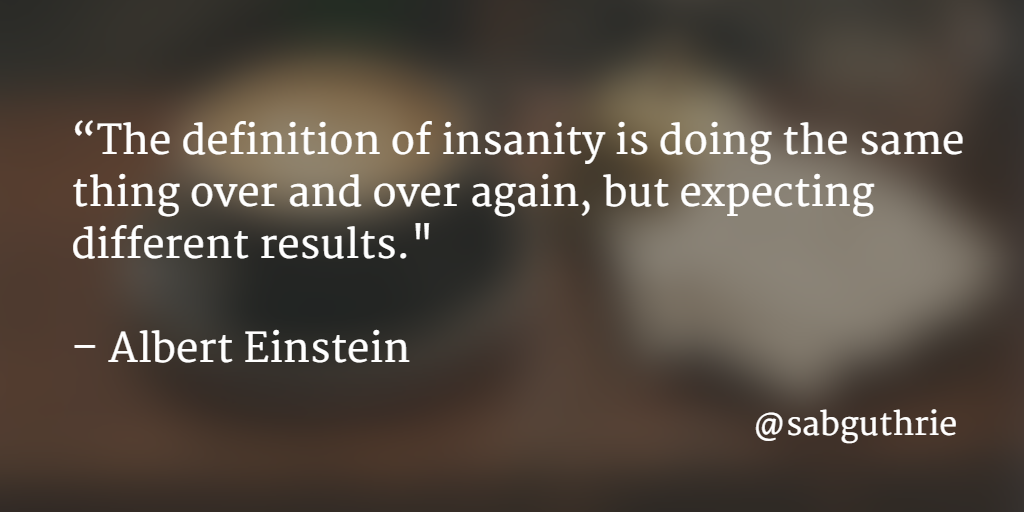 Bringing inspiration from other industries

So much for naivety – but what about the intelligent part? Just because you may not have experience in one particular industry. It doesn’t mean your experience is not valuable. Especially if you are able to bring inspiration from experiences in other industries.

Here’s the thing. Intelligent naivety isn’t marked by inexperience. It’s a mindset to be constantly used and tinkered with. It doesn’t necessarily mean hunting for new ideas. It can mean changing the context of those ideas you already have. Just finding a new place for them.

Today PR practitioners need to have rich experience as well as local knowledge so that we can be tuned into what is going on in all aspects of the organisation and industry in general.

A benefit of intelligent naivety is we’re not hamstrung by the impossible. We don’t know what is possible and what’s impossible. So we’re not going to (or even able to) self filter and screen out key opportunities on the grounds that ‘it can’t be done’.

No such thing as a dumb idea

Even the ‘dumbest’ idea will usually contain a kernel of a thought; a jumping off point from which a better idea can be built. So build up don’t knock down not even the ideas which at the outset seem the dumbest or impossible to action. Don’t dismiss ideas because they can’t be achieved.

Who’s to say these ideas are only unachievable because you’re asking the same people the same questions. Or that they’re impossible today because of the way your firm has been organised.

Intelligent naivety means challenging old assumptions. Giving them a shake. Seeing which ones stand up to scrutiny. And which ones fall apart.

One job I had early on in my career involved writing customer orders onto coloured carbon paper. Yes, that’s right pressing hard with a biro as I wrote. Not populating fields on a PC CRM or touching boxes on an iPad screen.

Each order form pad was interweaved with white, yellow and green carbon paper. I’d only been with the company a few months but had never been satisfied by any explanation as to the significance or purpose of the colour-schemed carbon paper.

I decided to investigate. Finance would know (or ‘accounts’ as the department used to be called.)

I visited the ‘finance’ department. (It was across the hall from HR – or ‘personnel’ as it was then). There it was explained the green copy went with the bundle of job documents. The white copy went into a lever arch folder. The yellow ones were binned.