The Advertising Standards Council of India (ASCI) has rolled out guidelines specifically detailing the dos and don’ts for brands, marketers and influencers. Titled the Guidelines for Influencer Advertising in Digital Media India’s advertising self-regulator aims to enable consumers to identify when influencers are deriving some benefit for promoting a product, and for influencing opinions and behaviours. These guidelines prescribe stringent disclosure requirements for influencers, and place obligations on both advertisers and influencers.

Of course India is not alone in publishing influencer marketing guidelines. Here in the UK the Advertising Standards Authority and the Competition and Markets Authority have spent years building awareness with advertisers, agencies and influencers of the rules and regulations. The Federal Trade Commission in the US has likewise ensured for years that advertisements are easily identifiable as advertisements. Other countries are following suit. In May this year the Turkish Advertising Board of the Ministry of Trade published the Guideline on Commercial Advertising and Unlawful Commercial Practices Social Media Influencers.

ASCI’s new guidelines are of particular interest, however, because they are the first in the world to actively address virtual influencers and include a clause specific to their use.

“A virtual influencer must additionally disclose to consumers that they are not interacting with a real human being. This disclosure must be upfront and prominent.”

The Indian regulator defines virtual influencers as “fictional computer generated ‘people’ or avatars who have the realistic characteristics, features and personalities of humans, and behave in a similar manner as influencers”. The guidelines note that disclosure must be made in a manner that is well understood by an average consumer. “A virtual influencer must additionally disclose to consumers that they are not interacting with a real human being. This disclosure must be upfront and prominent.” 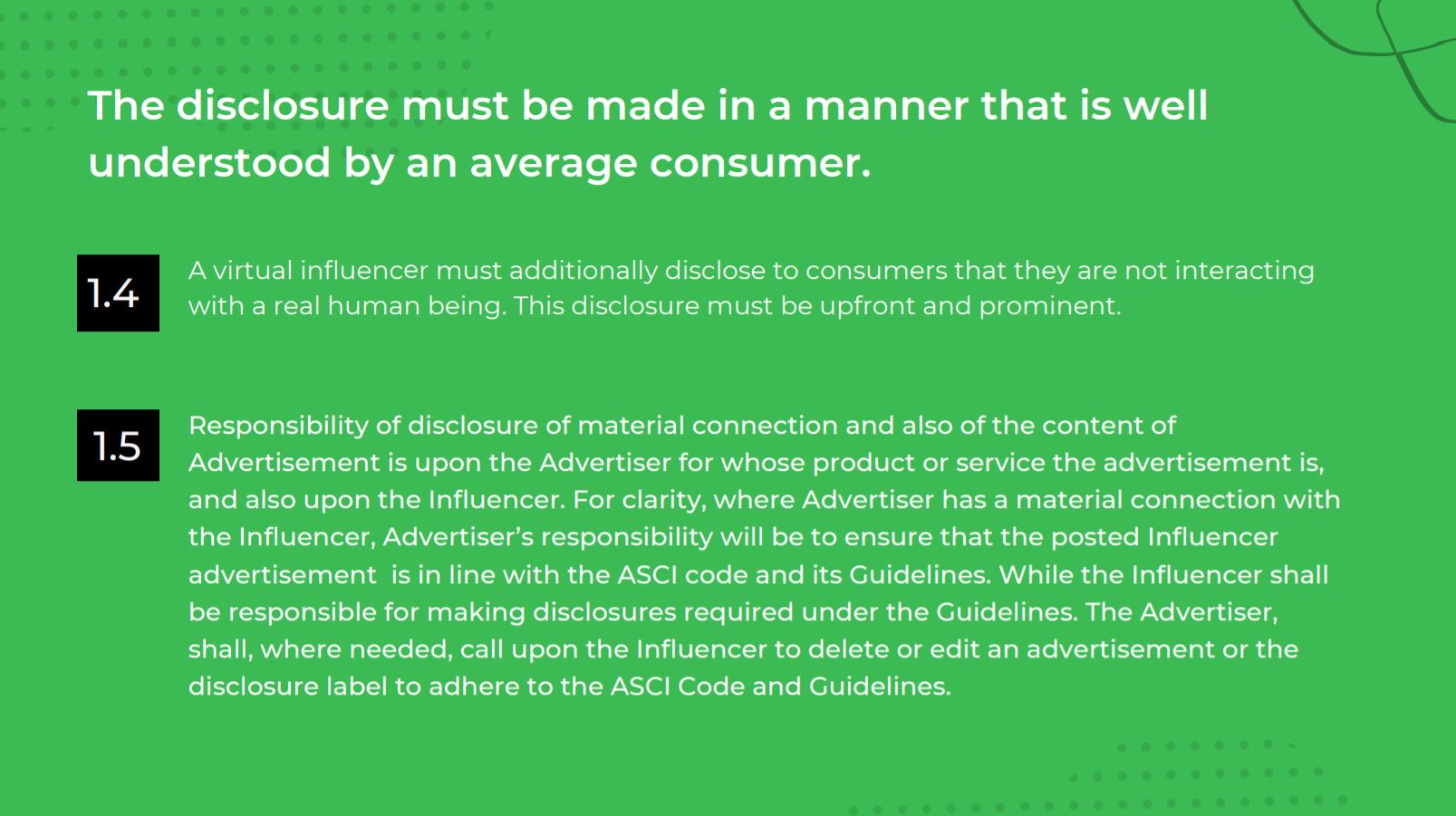 Writing in my book chapter Virtual Influencers: more human than humans I discuss the issue of virtual influencers and transparency. There founder of the Virtual Influencer Agency, Dudley Nevill-Spencer, advocates a virtual human participant's code of ethics. It is his belief that every virtual human should be watermarked. The mark would designate two pieces of information: firstly, that the influencer was virtual rather than human, secondly that the image could be traced to the owners to establish who is responsible for the content and what the motivations are behind it. The new ASCI guidelines address this transparency point by compelling advertisers to declare when a virtual human is just that - virtual not human.

Should advertising regulators in other jurisdictions follow India’s lead and explicitly address virtual influencers within their influencer marketing guidelines? Not necessarily.

Rupa Shah, founder of Hashtag Ad Consulting and former senior investigator at the ASA explains: “The ASA would absolutely not hold back from investigating posts by an avatar if they considered there was a breach of the CAP Code. ASA rulings into influencer marketing always name both the brand (i.e. the advertiser) and the influencer (i.e. the publisher) but the responsibility for providing the written response rests primarily with the advertiser, so any ambiguity about an avatar’s true identity would not prevent the ASA from publishing a ruling.

"If the brand and the influencer agree not to repeat the non-compliant ads/posts the matter would end there because the ASA does not issue fines but, if there are repeated breaches, the ASA’s sister body, CAP, can impose a range of sanctions. But even if it did get to this point (and it rarely does) the avatar’s identity would still not pose a problem because CAP could bypass the influencer and work with the brand and the social media platforms to prevent further breaches.

"There’s no suggestion that avatars are being used to manipulate the regulatory system but if there did appear to be a growth in non-disclosed posts by numerous avatars, the CMA could step-in because they take a wider perspective on consumer issues than the ASA/CAP. They do have the power to impose fines and to take action through the criminal courts so the companies behind avatars would be exposed and held to account.” 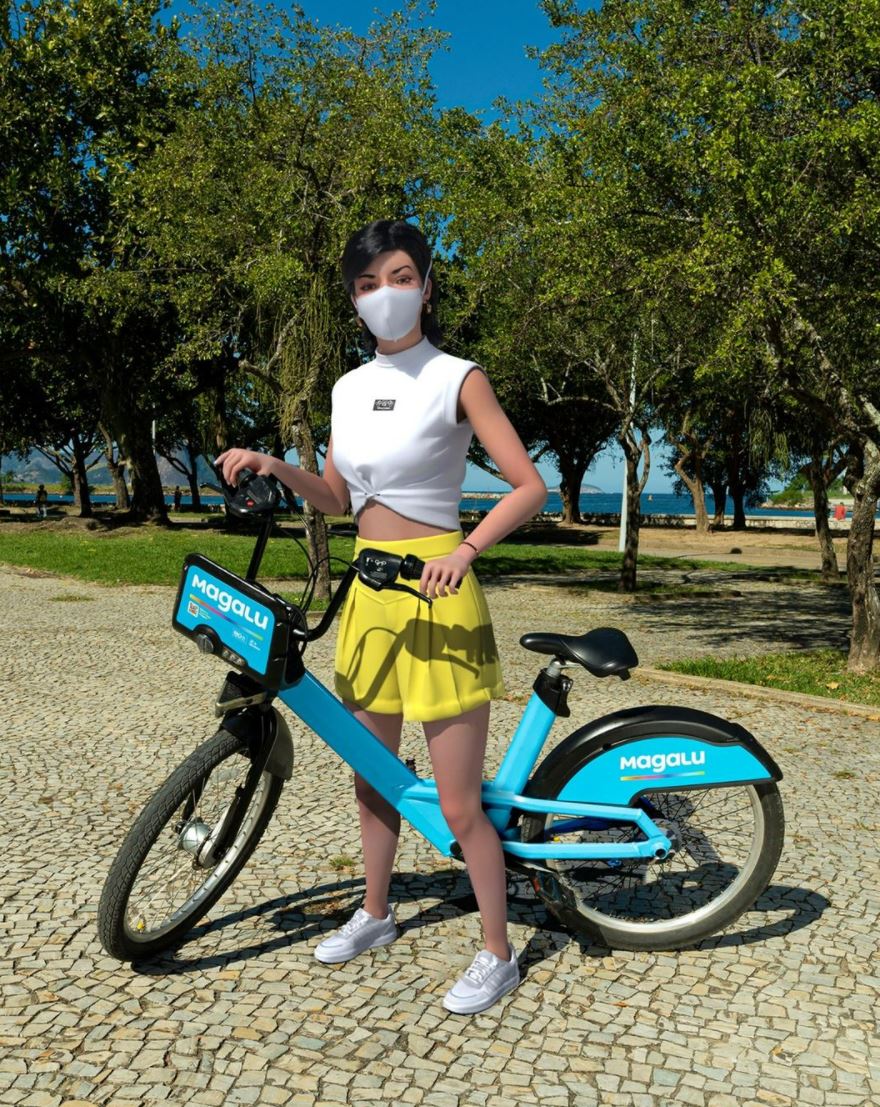 Brazilian virtual influencer Lu do Magalu is the most followed CGI influencer in the world. She has been in 'the business' the longest too. Her first brand collaboration was over 10 years ago promoting iBlogTV on YouTube.