How the social age is redefining success in management

Many successful managers rise to fulfill responsible C-suite positions through their political prowess rather than through their abilities to lead satisfied, committed team members who habitually produce mountains of high calibre work. The social age will turn this on its head – writes Scott Guthrie.

Management used to be thought of in terms of planning, organizing, commanding, co-ordinating, and controlling. This classical view is now seen as idealised and was challenged by management writers in the 1980s.

Henry Mintzberg, business academic and author, argued the reality was that real managers tended to lurch from one brief and disjointed encounter to the next having little or no time to reflect.

Characteristics of successful and effective MANAGERS

Luthans used speed of promotion as a measurement of success whilst characterising effective managers as “those who have satisfied, committed subordinates and high performing [business] units.”

So, what are the different behaviours shown by successful versus effective managers? Pretty much everything. These managers do different things. In fact they spend the majority of their time doing opposite activities to each other.

Successful managers get ahead by politicking

Successful managers get ahead by networking for personal gain. They spend most of their time engaging with people outside their teams. They’re socialisers and politickers. This self promotion is the biggest contribution to their success.

The reverse is true of effective managers who spend the majority of their time communicating with their teams and on HR issues. Effective managers answer questions. They put team tasks into the wider context of the organisation. They break down inter departmental silos by sharing with their teams the information they’ve received from other managers including the outcomes of meetings and how these decisions affect the team.

Fred Luthans didn’t catagorise his analysis of managers by gender. Given his research is from 1988 I’ve assumed a heavy gender bias towards male managers. However, the signs of Luthans’ findings are still visible today. Especially for women. 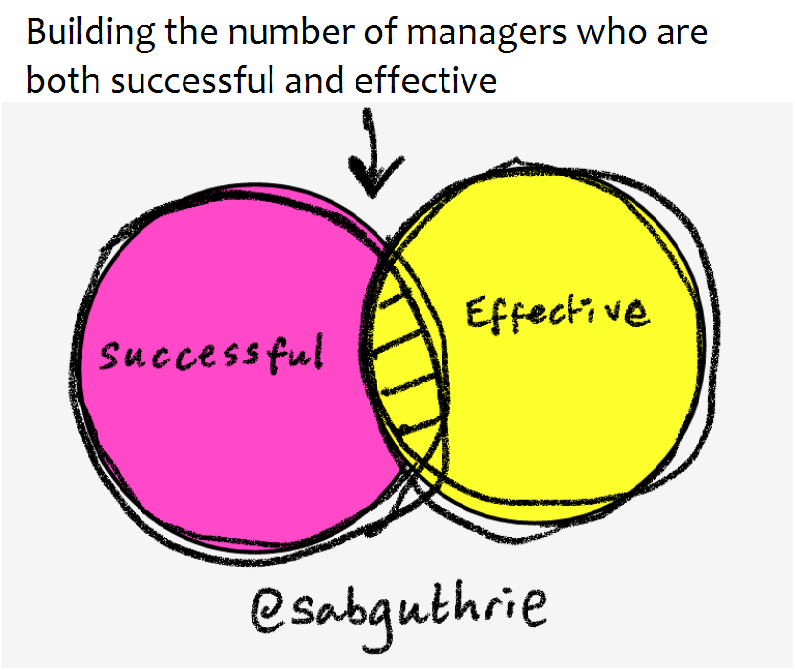 Following a Holmes Report which spotlighted the lack of women CEOs in public relations agencies Stephen Waddington, Partner and Chief Engagement officer at global PR agency, Ketchum reached out to his network for possible reasons for this.

Charlotte Sansom, Senior PR Manager, DWF view is that: “Building a strong personal brand takes considerable time, effort and relies on a good network of contacts, and my sense is that, on the whole, men dedicate more of their time and energy to building that network which inevitably means that they’re presented with more opportunities.”

Whilst Laura Sutherland, Managing Director, Aura PR had this to say: “Women tend not to shout out about their successes and sell themselves. Men by contrast are on the whole much more confident in themselves and what they have achieved.”

Fortunately for those managers who spend their time empowering their teams for success rather than promoting themselves management styles and organisational design are changing. They’ve had to. They’ve had to adapt to today’s VUCA world. One marked as – volatile, uncertain, complex, and ambiguous. Most firms have left (or are leaving) the industrial age behind. Instead we’ve entered the social age.

In today’s fast-changing environment where the future is marked by uncertainty firms need their employees to be able to take creative initiatives. Firms need managers who can work in an environment where he or she has far less control than in traditional companies and who is able to bring out the best in others.

Creative endeavour is only likely to come from committed staff, the nature of the manager’s job shifts to one where changing perceptions, ways of nurturing empowered staff and encouraging networking become very much more central to the job. These are hallmark attributes of Luthans’ effective manager. Managers who stimulate and sustain an open atmosphere where the spirit of collaboration is the dominant force.

In the social age good management is marked by facilitation not control. Managers provide a bridge of understanding bringing to the team context and content from the rest of the firm and beyond. Uniting the team around a common purpose in order to drive action.

Good managers in the social age promote informal, networked  approaches to decision making with an emphasis on collaboration. Those who share their own ideas and spread the ideas of others are rewarded. Managers help their teams build on existing ideas to make them better. They don’t think “yes but” they think “yes and”.

Power as current not currency

Managers have moved from knowledge hoarders to knowledge pumps. The moniker: ‘knowledge is power’ is being replaced with ‘power belongs to the network’.

“Old power works like a currency. It is held by few. Once gained, it is jealously guarded, and the powerful have a substantial store of it to spend. It is closed, inaccessible, and leader-driven. It downloads, and it captures.

“New power operates differently, like a current. It is made by many. It is open, participatory, and peer-driven. It uploads, and it distributes. Like water or electricity, it’s most forceful when it surges. The goal with new power is not to hoard it but to channel it.”

To survive today’s VUCA environment the managers who will succeed are those who build creative, learning organisations populated with fast-acting, empowered workforces of multi-disciplinary teams. Team members who can ‘look around corners’ and make the connection between the work they’re doing and the knock on effects to others both inside and outside the firm.

These teams rely less on procedure and more on awareness of different perspectives held by different stakeholders.

The social age is a significant change catalyst. It calls for ruthless transparency and honesty. Managers are beginning to rightly be measured on what they do rather than what they say they do or think they may do in the future. The distance between what we say we do and what we really do forms a legitimacy gap and the social web – as indiscriminate amplifier – turns up the volume on any gap.

Organisations are beginning to tie promotions to performance not politics. They are developing organisational cultural values which support and reward effective performance. Firms are starting to ensure their appraisal system really is performance based. Not nudge-nudge, wink-wink performance based – but in reality all down to personality and how well you can schmooze your line manager.

Networking is an ever-increasingly vital aptitude but its emphasis shifts in the social age from me to we. Self promotion gives way to promoting team work. In the social age managers build collaborative, creative organisational climates. Ones where their teams are confident to ‘have a go’. To make small risks. Take the initiative. Obtain information. Where team members feel safe. Where their new ideas are supported and built up – not knocked down. Where team members are motivated through being empowered and where diversity is embraced – the sharing of ideas, experience and skills from different backgrounds and mindsets is seen as an advantage. This sounds a lot like the skill sets already owned by Luthans’ effective managers.