An influencer’s power lies in the authentic voice which chimes with a select audience. Brands need to trust influencers with that voice – writes Scott Guthrie.

So, Constance, my five-year-old daughter told me a joke this morning: “Why should you never let Elsa hold your balloon? … . Because she’ll always let it go.”

Of course, to get the full benefit of this hilarity you must first have listened to Disney’s animated film: Frozen a gazillion times.

But as with many of Constance’s thoughts there is often a kernel of an idea I can borrow and re-use.

In our professional lives it’s often hard to relinquish control. Whether it’s the entrepreneur who’s idea has grown into a viable business and who now needs to hire a team of managers to oversee the business. Or perhaps it’s a novelist who’s sold the film rights to his book.

We realise that we need to cede power because someone else has more specialised skills appropriate to the situation. For the entrepreneur it’s bringing a product to market through people with the relevant legal, financial and operational skills.

For the writer it’s handing over the reins to a film director who can turn the written word into a visual experience of mass appeal.

Brands turn to influencers because they want their stories to be told with an authentic voice. Often, however, they also think they can control the message via influencers.

Influencers know their audiences. They know what their audience likes – and what it doesn’t care for. They’ve built a following through hard work. Consistently posting quality content which resonates with their following and they engage with that following.

According to research conducted by Crowdtap, a people-powered marketing platform, 76% of surveyed influencers said they will work with brands that grant editorial and creative freedom.

Conversely when asked about what they dislike about working with brands 47% of surveyed influencers said their editorial guidelines are often too limiting or strict.

Content creators say their foremost method for vetting brand partnerships is by determining which opportunities are most relevant for their audiences. 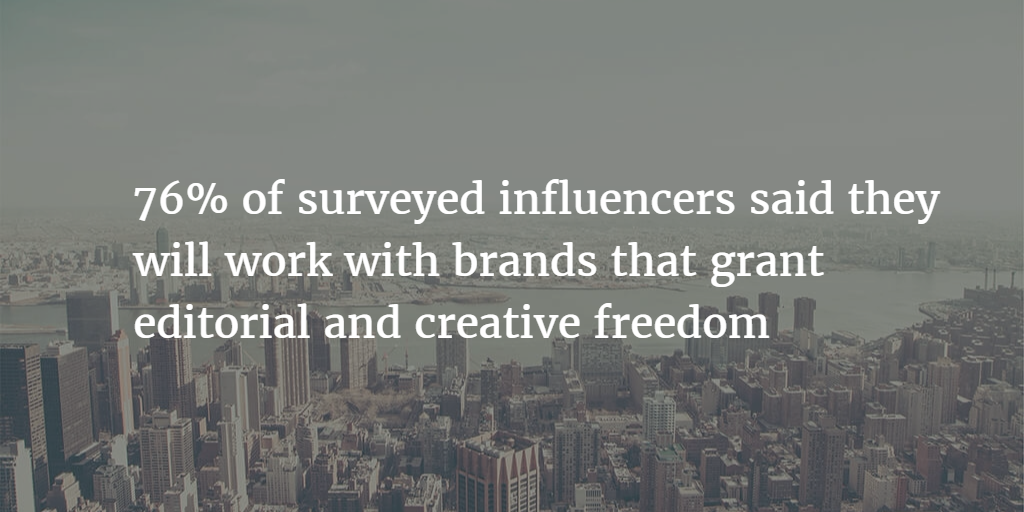 Brands have to trust their own digital due diligence in the selection and recruitment phases of influencer marketing. Trust that they’ve chosen the most appropriate influencer based on reach, resonance, relevance and how receptive they are to working with you.

When it comes to the creative delivery phase brands need to remind themselves why they’ve engaged with these influencers in the first place.

Influencers are influential because they consistently create compelling content that resonates with a select audience. The content resonates because it’s authentic.

The more you try to control the message via a straight-jacket of a creative brief, re-write requests or pushing for further edits, the more the authentic voice is diminished to a whisper.

Influencers have grown their audiences because their opinions chime with those of their audiences. So, let them speak. Let them speak in their voice. That’s why it’s so important to ensure you’re working with the most appropriate influencer in the first place.

Once you are comfortable you’re working with the most appropriate influencer remember Constance’s joke and, in the words of Elsa: “Let it go.”