5 ways to enhance your creative thinking for business success

Firms fail to innovate when they they get caught up in recurring and defensive routines. Habits form which prevent a climate of openness taking hold.

We tend to avoid confrontation and airing negative views. We skirt around sensitive issues for fear of alienating colleagues or creating political enemies from peers and hierarchical superiors.

We often get defensive when things go wrong becoming reluctant to examine our own feelings objectively. And so, by doing these things, we shut off opportunities to learn.

It’s easier to blame others and to get into the habit of avoiding awkward personal confrontations than to reflect on our own experiences and to learn from them.

Building creative, change-ready capabilities within a firm calls for a climate of trust. This is where mistakes are forgiven, perhaps celebrated. Firms need to inject more curiosity, forgiveness and love into their routines. If they can manage this it will lead to more innovation and creativity because when people feel safe, they are more forthcoming and prepared to explore new territory.

Inertia as enemy of success

The enemy of success isn’t failure; it’s inertia. Albert Einstein said: “a person who never made a mistake never tried anything new”.

Be guided by a line from US motivational speaker Tony Robbins: ‘What you know doesn’t mean shit. What you do means everything’.

We used to think of economies as being efficient, linear, and mechanistic. Today they’re better described as being volatile, uncertain, complex and ambiguous (VUCA).

Coping with today’s VUCA world means building an organisational culture in which trust can be earned. A climate which enables us to try out new approaches to solving problems. It means not being afraid to make mistakes and learning what works through some trial and error. It means implementing what works and then sharing the learnings. It’s replacing internal competition with collaboration. It’s learning-by-doing that ‘routinizes’ the change mindset throughout the firm.

Here are five ways to enhance your creative thinking

Challenge your ideas and mindsets. But also challenge the way you form those ideas. If you only ever use the one ‘go-to’ problem solving technique you’ll end up with invisible gaps in your understanding. There’ll be questions that never get asked. Connections that are never made. So stand back and look at problems with fresh eyes. Take a moment to notice and challenge the things you habitually do not think about and the techniques you don’t use.

Explore different perspectives. Try stepping into the shoes of each important stakeholder in turn. Each contrasting perspective is a slice through a complex reality. Identifying a range of extreme views can often give you useful, if exaggerated, insights. That’s because  for every extremist there are usually many who feel the same – just not as strongly.

Ask people from other parts of your life for ideas on how to tackle the problem. Look to your networks on Twitter, Facebook Google+ or in Linkedin groups for their thoughts.

Learn to say ‘Yes , and …’ rather than ‘Yes, but …’. With any new idea the usable part might be wrapped tightly within layers of flaws. Learn to spot the kernel of a good idea and tease it from its flaws. Build on it. Use the idea to start a train of thought and then use ideas from that train of thought to trigger new possibilities.

The first idea can become a stepping stone to other ideas. Find analogies for the idea and use these to jump-start other ideas. 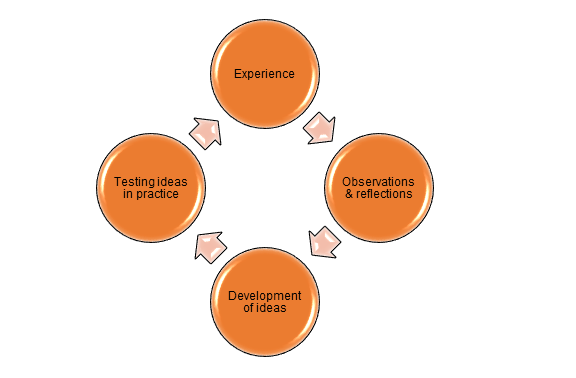 Become a tinkerer. Constantly reflect on your actions. Is what you’re doing working? Could it be improved? Do something. Reflect on what happens. Take the next action based on that reflection. Use all experiences for learning and growth. Build enhanced self-awareness. Become a reflective practitioner. Follow Kolb’s learning cycle.

These are just five quick ideas. There are hundreds more. Which ones have you tried? What other techniques would you add to the list?