The MysteryBrand site consists of rows of mystery boxes that visitors to the website pay to open. One box, for instance, is named ‘Woman’s Christmas’. It looks to have been reduced in price from $14.99 to $12.99 for a chance to open the box and win a prize.

Prizes in the Woman’s Christmas box range from one of three Lamborghinis, two Ferraris, through to a Chanel handbag, a Rolex watch down to a gingerbread man or a candy cane. The odds for winning each item used to be itemised against each prize. They were removed sometime on Tuesday whilst I was researching this article. 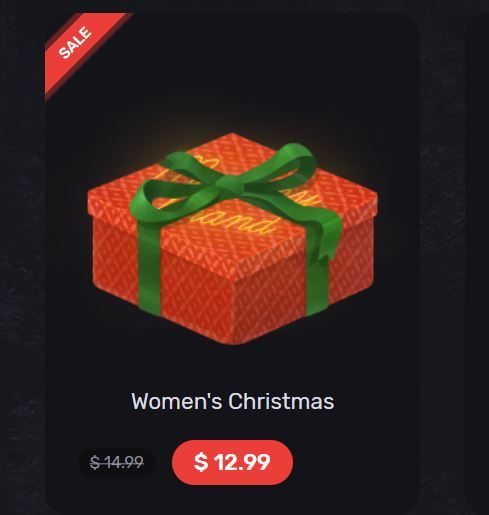 There are at least three issues with these influencer marketing campaigns:

The Advertising Standards Authority ensures that all gambling ads in the United Kingdom comply with the CAP Code and the Gambling Act 2005. Section 16 of the CAP Code, notes for instance that marketers should not exploit the young or vulnerable.

The ASA website explains that “The CAP Code requires ads for gambling products to be socially responsible, and particular consideration is given to protecting children, young persons and other vulnerable persons from being harmed or exploited. For the purposes of this section, “children” are defined as people under the age of 16, and “young persons” are people of 16 or 17.”

The website continues: “One way in which the Code seeks to protect children and young people is through stating that betting and gaming ads should not appeal to them in particular, especially by reflecting or being associated with youth culture.”

The Gambling Act does not apply outside Great Britain. Both Jake Paul and RiceGum are American YouTubers. Their content falls under the jurisdiction of the Federal Trade Commission.

Gambling is illegal for kids in the US, too, though. Every state prohibits gambling by minors. That's why gambling sites don't pay out to kids and go to great lengths to verify the identity of any winner. If you look at the terms of service for MysteryBrand you'll see they will “invalidate all the operations that were carried out by a person who has not attained the age of majority and to refuse to issue a winning product without any refund of spend value.” Translation: they'll take a child's money but won't pay out prizes to them.

A 'game' where website visitors are encouraged to spend up to $250 for the opportunity to open a virtual box and 'win' prizes ranging from hand towels to Italian sports cars must surely be considered a gamble.

YouTuber starts off winning a few low-cost items: a fidget spinner, Converse trainers. Then, their luck begins to turn. Morgz wins an iPad Pro.  Morgz wins an iPhone. Jake Paul wins an iPhone, too.Then the YouTubers lose again. They keep gambling. Their persistence pays off. They win even bigger prizes. RiceGum wins a Chanel handbag worth $11k. Jake Paul wins two Apple watches. Then, to prove the MysteryBrand website is legitimate; the process: effortless,  the videos each finish with the prizes being delivered in two to three days and unboxed on camera to whoops of joy. 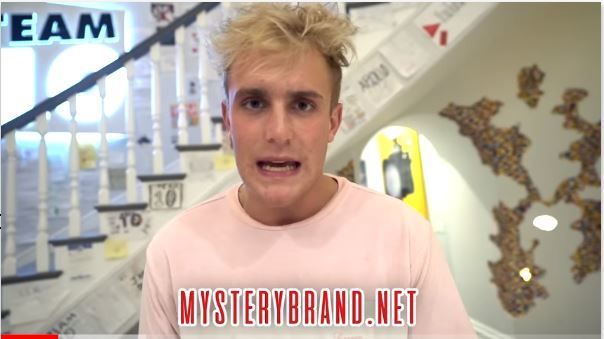 YouTubers target kids with online gaming site MysteryBrands: Jake Paul understand that the age of his core audience lies between 8 and 15 years old.

Here's what I suspect happens between the brand and the influencer for a brand collaboration to take place. My theory is just that: an idea. It is based on nothing more than a hunch and a big dollop of scepticism.

I want to reiterate that I'm hypothesising this workflow. The site might be legitimate but a marketing campaign utilising YouTubers would languish as flat as day-old, uncorked New Year’s Eve champagne if the video didn't show the creators winning big-ticket item after big-ticket item.

This brings me to the third point. Blind Freddy and his golden retriever would think twice about a flutter with MysteryBrand after the most cursory of glances at the website. But RiceGum, Jake Paul and Morgz have core audiences that are both young and impressionable.

Jake Paul acknowledges the age group of his core audience is between 8 and 15. Morgz Tweeted just before Christmas: “You also have to be 'ridiculously stupid' to not realise my vids are made for KIDS”. Legalities around promoting gambling to minors notwithstanding there are questions of morals and ethics to be considered. 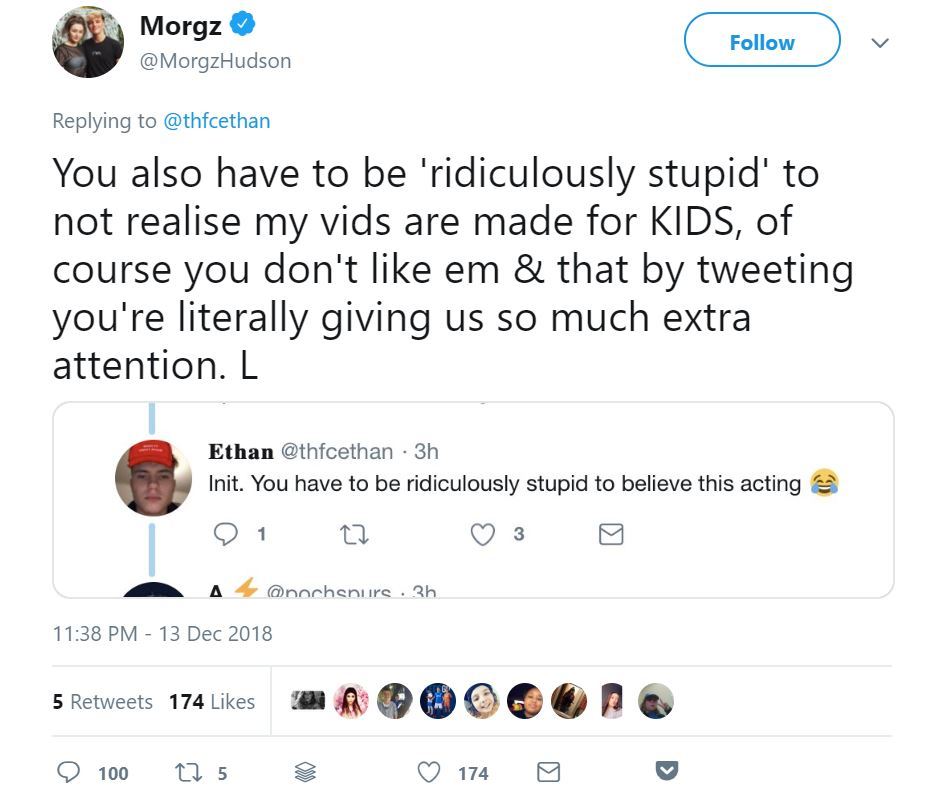 RiceGum, Jake Paul and Morgz are not the only YouTubers to work with the brand. Amongst several others XtremeGamez worked on a paid-for partnership with MysteryBrand in July 2018. Their YouTube channel description reads: “Become An Xtremer Today And SUBSCRIBE! We Are 20 And 19 Years Old Our Names Are Thomas And Jonathan 🙂 And we live in Australia we do what you want to see! have fun play games and chill! 😀 family friendly content and kid friendly! join us and play, learn and have fun and we play fortnite battle royale and love gaming!!”

Influencer marketing works because creators build communities around their content. These communities identify with the creators they follow. The audience trusts what these influencers have to say and acts on their recommendations. But when the trust evaporates so, too, does their influence.

In their July 31 video the two Australian’s told their young viewers: “This [MysteryBrand] is a high-quality website. You guys can trust it. Trust us. We have literally dealt with them first hand." This sounds desperate. I find the more times someone asks to be trusted, the less trustworthy they seem. One way to earn trust is to be trustworthy. This means making the right decisions. A decision to part children from their money does not seem to me to be one of those right decisions.

This seems like a fast way for children to jettison their Christmas money before the first week of the new year is even over.

Remember Trevor Martin and Tom Cassell? You might know them better by their online nom de plumes - TmarTn and Syndicate Project. They were YouTubers and the owners of CSGO Lotto.

The MysteryBrand site shares distinct similarities with CSGO Lotto. In the video game Counter Strike: Global Offensive (CSGO), players can exchange real money for the chance to obtain a modified weapon, character or avatar known as a skin.

Martin and Cassell exploited this phenomenon and created CSGO Lotto - a site that allowed players to buy and bet their skins for the chance to win more valuable ones.

The two then uploaded stacks YouTube videos in which they placed bets on CSGO Lotto and won big prizes. What they failed to share with their YouTube audiences was that they were directors and owners of CSGO Lotto.

Ultimately in September 2017 Martin and Cassell settled Federal Trade Commission charges that they deceptively endorsed the online gambling service CSGO Lotto, while failing to disclose they jointly owned the company.

In video games such as Fortnite, Overwatch, and Fifa 18, loot boxes have a similar premise as skins. Through gameplay or by paying real money, players get access to treasure inside a box, with no guarantee of what that treasure will be.

One of the main difficulties currently is that not everybody agrees on what exactly counts as a gambling activity for children. Many, however, believe skins betting and loot box features are a form of gambling. Loot boxes are illegal in Belgium and the Netherlands. In Australia, a Senate inquiry called on the federal government to investigate whether loot boxes are harmful.

When creators upload content to their subscriber fans there is a psychological contract at play. A dynamic tension between brand, influencer and audience. Each has their own priority. The brand wants publicity. The influencer wants to be paid. The audience member wants to view content that is relevant to their values and world's view, that entertains or educates, that inspires them into action.

Influencers promoting mystery boxes, loot boxes, or trading skins know their audiences. They know the demographics. They know the content will likely appeal to minors. They have  moral obligation - and a legal obligation - to do the right thing by their followers. They people who have made them influential in the first place.