Why accepting unconscious bias in influencer marketing is not just ethically wrong but is a lost opportunity for brands to engage with wider groups.

What if our mindsets, and experiences are drawn from only a small non-representative pool? What if the ideas and creativity of one-in-four of those within an industry are formed in a place where nationally the figure is only one-in-twelve?

Earlier this year the Chartered Institute of Public Relations' State of the Profession survey showed this is what is happening within public relations. More than a quarter (28%) of the public relations workforce in the UK is privately educated – four times the national average (7%).

The findings are compounded by diversity figures which reveal Black, Asian, and minority ethnic (BAME) representation is at a five-year low.  92% of PR professionals describe themselves as white, according to the CIPR survey. Department for Education figures for England reveals ethnic minorities comprise 31% of the primary school population. Yet only 8% of PR professionals are from BAME backgrounds.

The decline of ethnic minorities in PR is at odds with UK population trends and poses a long-term threat to the relevance and staying-power of an industry which should reflect the society it seeks to engage.

Practitioners claim to believe PR is more effective when practised by diverse teams, but the data raises serious questions over whether the industry is truly committed to addressing its diversity crisis.

“I'm not a fan of the word diversity because it’s not about diversity, it’s about humanity,”

The UK PR industry is not alone in fishing from a small, non-representative pool. Harvard University is renowned globally as near impossible to get into as a student. The acceptance rate stands at just 4.5% in the most recent admissions cycle for the class of 2023.

But it’s significantly easier to land a spot at the Ivy League institution if you’re a legacy student or an athlete—a fact that disproportionately benefits white applicants.

According to recent research by economists Peter Arcidiacono, Josh Kinsler, and Tyler Ransom, and reported in The Atlantic news site in “the six admissions cycles between 2014 and 2019, 43% of white students admitted to Harvard were either legacies, recruited athletes, children of faculty and staff, or students on the Dean’s Interest List—a list of applicants whose relatives have donated to Harvard, the existence of which only became public knowledge in 2018. By contrast, no more than 16% of admitted students who were African-American, Asian-American, or Hispanic fell into one of those favoured categories.”

Does unconscious bias in influencer marketing matter? Does it matter if we're not representative of the audience's we're trying to engage with and ultimately influence?

First and foremost yes, of course, it matters because representation is the right thing to do. Brands and organisations shouldn't discriminate. Instead, society should be accurately represented. It’s the moral thing to do. It’s the ethical thing to do.

Cindy Gallop, former chair of Bartle Bogle Hegarty spoke recently to Contagious, the marketing intelligence and events magazine, about the ethical responsibilities that clients and agencies have when it comes to areas like diversity.

“I'm not a fan of the word diversity because it’s not about diversity, it’s about humanity,” argued Gallop. “When we talk about diversity, all we’re talking about is reflecting the world as it really is.

Beyond the ethical dimension, there are also brand safety issues to consider as well as lost commercial opportunities. Nicole Ocran, fashion blogger and talent influencer strategy manager for The Fifth spoke on a panel at last week’s Influencer Marketing Show. Ocran explained:

“I’m a black woman and I’m a consumer. I’m expected to relate to a white woman in an ad, but it’s not the same the other way around. I want to be able to make purchases from brands who represent me, who represent my friends and family.”

“I’m a black woman and I’m a consumer. I’m expected to relate to a white woman in an ad, but it’s not the same the other way around. I want to be able to make purchases from brands who represent me, who represent my friends and family.”

An influencer speaks out

Increasingly influencers are calling out industries and companies who they feel don’t measure up to their own and society’s expectations.

Plus-size style blogger Nerd About Town aka Stephanie Yeboah became frustrated by the lack of inclusion within the travel and tourism vertical. In May she decided to do something about it.

In a rallying cry to fellow creators, Yeboah took to Twitter and asked:

“Hi Influencers! If you come across any photos or IG Stories featuring campaigns or events that only feature white influencers, can you please screenshot the pic and send to me OR direct me to it? 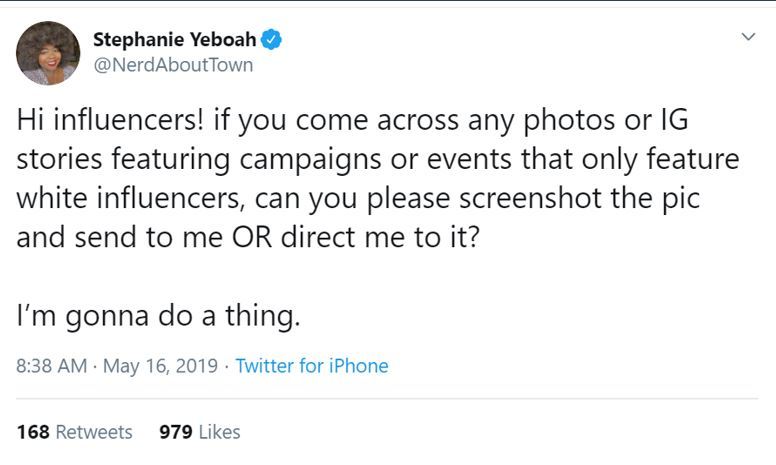 True to her word Stephanie did ‘do a thing’. She penned an article a couple of weeks later for the Metro newspaper. Yeboah writes: “By exclusively using white influencers to tout holiday experiences ... the story being told is that these experiences are only available to white people. ... Only white slim women go on holiday. ... It needs to stop.”

Here Yeboah is calling out an industry. Calling for the travel industry to be more representative. It’s a warning for brands who fail to be representative of society. It’s also a lost opportunity to build and strength engagement with sections of a wider community.

Earlier this year I undertook a large piece of consulting work for an influencer marketing platform. My strategy paper provided a two-year direction of travel for the company. Part of the analysis I undertook was to conduct 40 one-on-one interviews with leading influencer marketers.

Communicators with enlightened clients are calling for a breadth of talent. A diversity of talent; a true representation of Britain. This push for inclusiveness is a marriage of ethics and sound business sense. 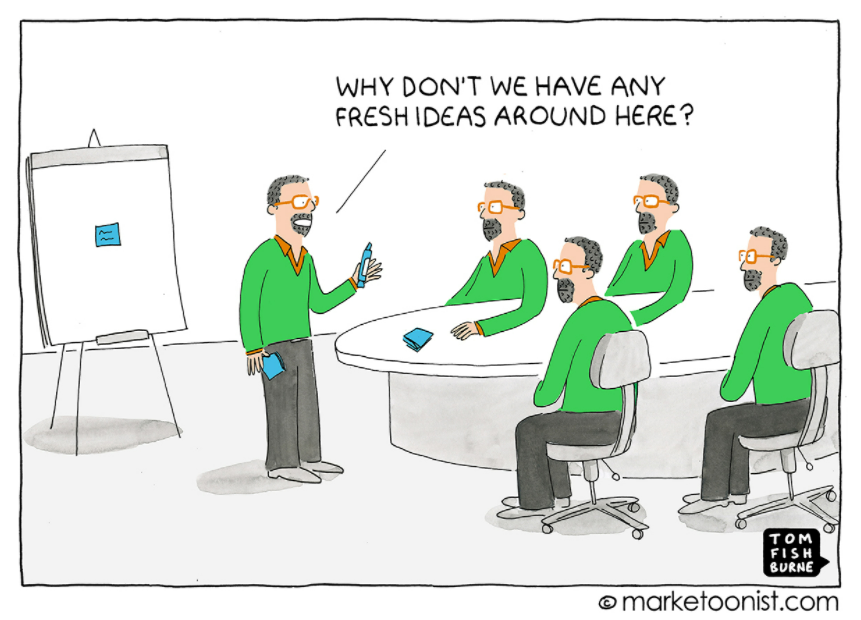 Eric Toda, former marketing executive at Gap Inc., Airbnb, Nike, and Snapchat who has created high-visibility global campaigns with influencers like Beyonce and Kim Kardashian, shared his thoughts on how brands can do better:

“You tend to see marketers let their unconscious biases' make decisions. It's not a secret that marketing is a predominantly white industry so naturally there are marketers who choose influencers who look like them; it's safe, it's relatable, but unfortunately, it's not real life.

“As marketers, we continue to be one of the only industries in the world that can influence large masses of people; we can do that in the effort of good, or we can choose the other route. We need to put values-driven messages out there, show real-life versus a sterilized mirage, and instil purpose. You can achieve this by partnering with influencers that represent different stories, races, socioeconomic backgrounds, etc.”

Marketers let their unconscious biases' make decisions ... it's not real life. ... We need to put values-driven messages out there, show real life and instil purpose. You can achieve this by partnering with influencers that represent different stories, races, socioeconomic backgrounds,.

Be aware of potential unconscious biases

Donald Rumsfeld, former United States Secretary of Defense, made popular the phrase: ‘unknown unknowns’. It’s similar to the four stages to becoming competent whereby the learner passes from being an unconscious incompetent, through conscious incompetent, then conscious competent and ultimately becoming an unconscious competent. The first step to combatting unconscious bias in influencer marketing is to accept that it exists within our discipline and that we may be responsible for perpetuating it.

Writing in the preface of his book #Republic: Divided Democracy in the Age of Social Media Cass R. Sunstein says:

“In a well-functioning democracy, people do not live in echo chambers or information cocoons. They see and hear a wide range of topics and ideas. They do so even if they did not, and would not, choose to see and hear those topics and those ideas in advance.”

It’s about your audience. Not you

Think about your target audience. Think beyond demographics; consider the wider psychographics. When crafting your campaigns, think about your audience and imagine how they would react to a non-diverse influencer mix. Think, too, about the lost impact by missing out in engaging with sections of your audience.

Uphold your corporate and brand values. Be strategic in finding influencers who represent your audience and those values. This allows for more positive brand sentiment and affinity as you’re leveraging connectivity between community and influencer. Millennials and Gen Z are actively looking for brands to represent people who look like them and share their values, and this is a major shift in how "influence" is perceived.

This article is based on a keynote speech I gave in Ravenna, Italy in September as the guest of The Social Travel Summit for their fifth annual conference. The speech was titled ‘influencer marketing unconscious bias’. I was approached to speak at the two-day conference after the organisers read my article covering the CIPR annual survey in April.