So, it appears that fashion influencer, Marissa Casey Fuchs pimped out her wedding proposal to the highest brand bidder. Or, at least, her fiance Gabriel Grossman did.

How do we know? The pitch deck for the ‘campaign’ has surfaced. It became the focus of yet another, on-point article, by Taylor Lorenz for The Atlantic.

Chris Lee and I touched on the Lorenz article last week in a podcast. Here’s a quick recap of the story - ahead of an exploration of the wider issues for influencer marketing and society at large.

The ‘spontaneous’ proposal appeared to start with this, a piece-to-camera for Fuchs by Grossman on Instagram beginning with the line: “I have the most important question of my life to ask you.”

There followed a two-day scavenger hunt, orchestrated by Grossman, that took Fuchs from New York City to Montauk to Miami to Paris. Along the way, she collected two diamond-and-gold necklaces. Every step was documented for, and on, the 'gram.

Their Instagram followers were duped. Mainstream media were duped too. Media outlets including People, Elite Daily, and the Daily Mail all devoted digital ink to the drama as it unfolded. “Gabriel Grossman’s Instagram Story Proposal to Marissa Fuchs Is What Viral Dreams Are Made Of,” the Elite Daily headline reads. “Is this the most extravagant proposal EVER?” wondered the Daily Mail.

The reality is that the story started some time before in a pitch deck sent to brands and media agencies. Page two reads:

“This summer, Marissa of @FashionAmbitionist will be pulled into a surprise adventure created by the center [sic] of her life, Gabriel. He will remotely ask her to take an unexpected and sentimental journey to him, a journey that will encompassing [sic] many familiar stops along the way that offer their own unique gifts … We’re pleased to offer your brand the opportunity to align with this momentous occasion and the beautiful cities she will be visiting along the way.” 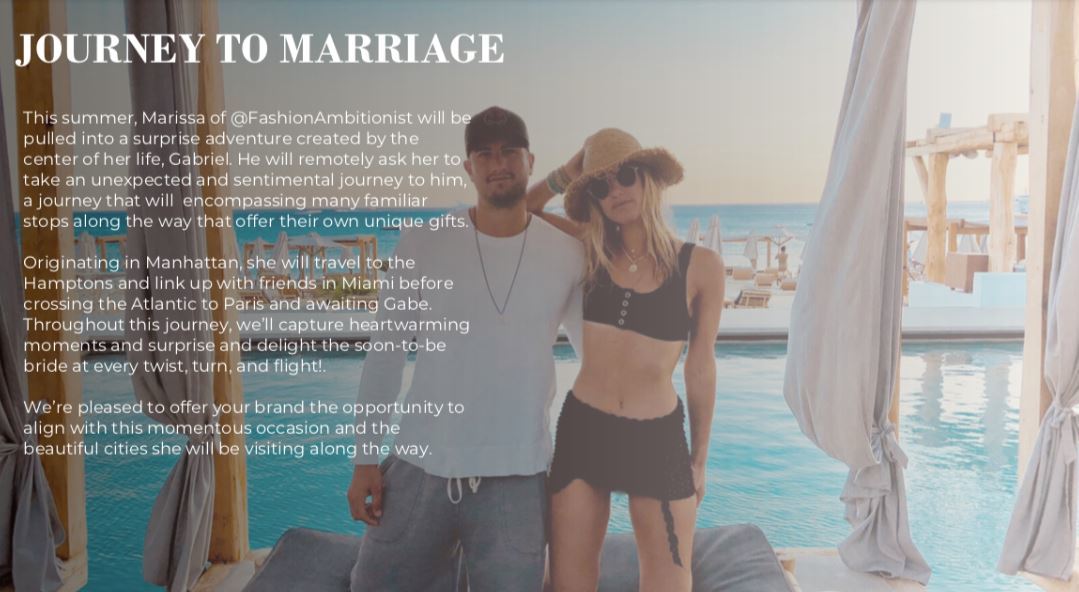 The Fuchs saga carries the same hallmarks as a story from last year - albeit at an industrialised scale.

In July 2018 a former Miss Universe contestant and her fiancé were ridiculed on social media for using their engagement to promote Nescafe coffee. Ranae Ayris, a fashion model and Miss Australia winner 2012, announced on Instagram she had agreed to marry personal trainer Andrew Papadopoulos at the end of June. Their paid-for collaboration a few days later with the instant coffee giant sparked online derision and begged the question: why would anyone use such a ‘memorable life moment’ and tie it in with a sponsored coffee post? 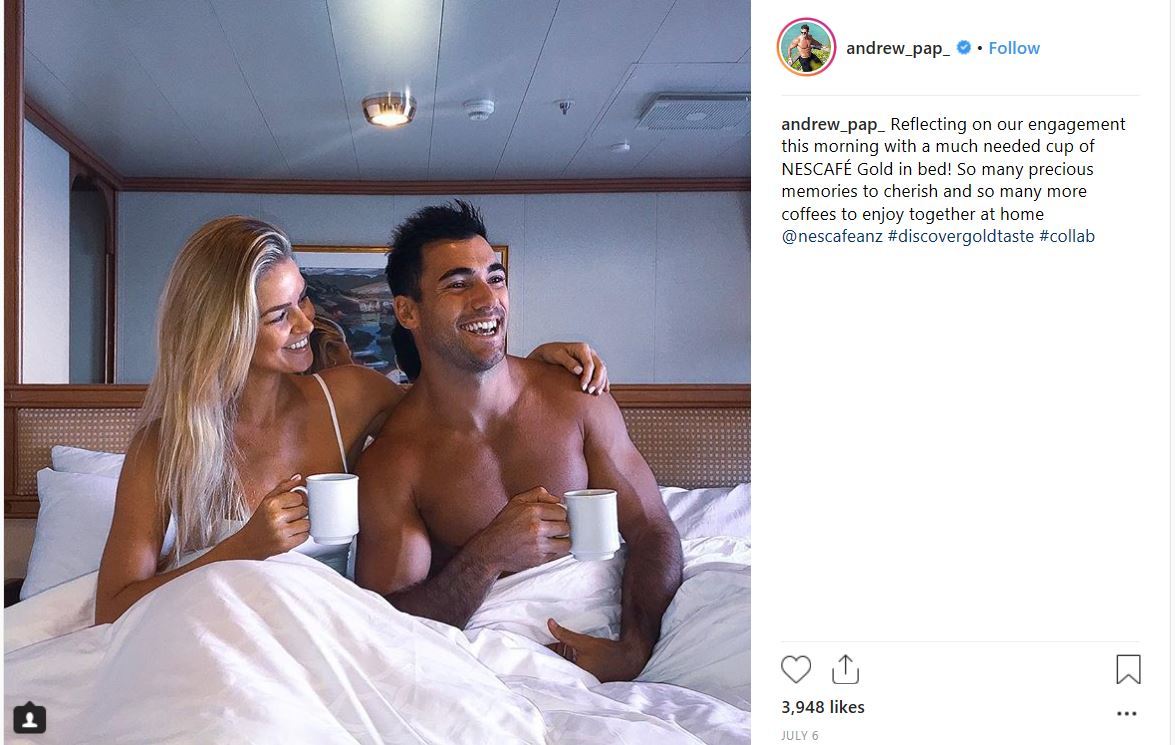 Papadopoulos captions the offending post: "Reflecting on our engagement this morning with a much-needed cup of NESCAFÉ Gold in bed! So many precious memories to cherish and so many more coffees to enjoy together at home @nescafeanz #discovergoldtaste #collab". The facility to comment on the Instagram post has since been switched off.

Who they? Jake is brother to Logan Paul. You know the boxing guy who does Japan suicide forest videos. Tana Mongeau is the ‘brains’ behind TanaCon - the anti VidCon which backfired spectacularly last year.

Is it love? Yeah probably. Is it more to do with a marriage of two brands? Yup, I pick that answer.  Both YouTubers have been posting regular vlogs of their high jinx together, with titles including: “i low key have a secret girlfriend,” “i got matching tattoos with Jake Paul,” “The secret behind our relationship..,” “our first time making out on camera..,” and “The truth about Tana sleeping in my bed..” The formula seems to work. Each video generates serious views and engagement.

What do these influencer marketing indecent proposals signal for modern society as a whole? These stories highlight two separate, though connected, phenomena:

Writing at the start of his book: Picnic Comma Lightning Laurence Scott asserts "we have evolved to build mental maps of the world not according to its actual, physical nature, but according to what allows us to thrive. In other words, our individual and collective realities are fictions – carefully constructed to enable us to maintain our particular perspectives."

It is probably a good time to mention then that Fuchs' Instagram following has since swelled by a third to 200,000.

IRL we adapt our language and behaviour to match our audience.  We talk about different topics, use jargon or ditch jargon altogether depending on who we are talking with and about what. The community of practice evolved around influencer marketing is of no interest to my family. Yet, it is crucial to my professional life, for example.

Online this context is eroded; collapsed. Gabriel Grossman’s Instagram proposal was directed solely at Marissa Casey Fuchs purportedly. Yet it is available for anyone with an internet connection to see. More importantly, it appears: it was available for all interested brands and media agencies to see and buy into.

The real and unreal; the context-specific and context-collapsed; the private and the public are all smashed into one on social media. This is to the detriment of influencer marketing; an industry founded on authenticity and ‘relatability’. At a wider scale, it is to the detriment of society at large.  When life’s personal meaningful moments are commercialised what happens to ritual as markers to life’s rite of passage?

In our increasingly VUCA world we need, more than ever, to hold on to life's meaningful markers; those rites of passage like college graduation, wedding proposals, marriages, births, deaths, and not commercialise them. They help us make sense of the world.

That said celebrities have been selling their wedding photos for decades. This is merely a democratisation of that crass practice.